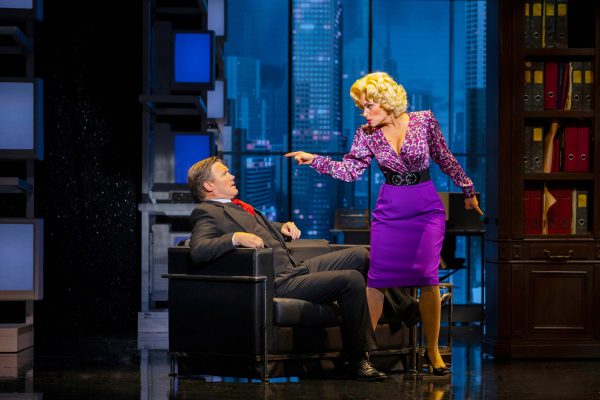 Eddie Perfect and Erin Clare in 9 To 5 The Musical. Photo by David Hooley.

The high-heels of history may have walked on, but for Dolly Parton fans the 9 To 5 musical is a treat.

Parton debuted her acting career in the 1980 movie the musical is based on. She also wrote the catchy theme tune for it, after drumming her long acrylic nails on a desktop inspired the opening bars. Nearly three decades later, she’s penned more songs to create the musical version of the story, and it’s been touring ever since.

The original movie claimed to be for ‘anyone who has been overworked, underpaid and pushed to the edge by an ungrateful boss’ and became a feminist cult classic. The musical version of the story is more feminism lite, reflecting Parton’s view that you win more hearts and minds by showing what it is like to be a woman, rather than ranting about it.

The storyline follows office workers Violet (Marina Prior), the ‘too old to chase, too young to fire’ office manager, Judy (Casey Donovan) who ‘misses Dick’, her husband who left her for a younger woman, and Dorelee (Erin Clare) the ‘Backwoods Barbie’, who is smart as a fox. All three women find themselves at the receiving end of boss Franklin Hart Jnr ‘s (Eddie Perfect) sexist behaviour. Violet is passed over for promotion, Judy told to call Franklin ‘Sir’, and Dorelee made to pick up pencils so he can gawp at her cleavage. The action descends to amiable farce as the women seek their revenge, and eventually realise their potential and dreams after Franklin is dispatched to Borneo by the company CEO.

While Clare manages to admirably fills Parton’s heels in the role of Dorelee, especially when she soulfully reminiscences on her small country town childhood, the character of Violet doesn’t really offer Prior the chance to shine, despite her obvious talent (she sparkled in Fun Home last year). Donavan presents a stirring fightback song in ‘Take Back my Life’ which received well-deserved whoops from the Sydney audience. The character of Hart has  some truly awful lines (‘what’s the difference between a woman and a tiled floor? If you lay ‘em right you can walk all over them for 25 years’) but Perfect’s toned performance manages to make us laugh rather than scream.

Caroline O’Connor, in the role of Roz the office busy body with a crush on the boss, delivers a  full-throttle performance, and although the jibe at older women’s sexuality being repulsive would have many feminists rolling their eyes, the audience loved it.

Like with McDonald’s, you know what you are going to get when you walk in the door of Dolly Parton’s 9 To 5. The production sometimes feels cringe-worthy rather than comic, like when Dorelee pulls a gun out of her handbag to threaten Hart, and he suggestively tells her she knows how she can ‘make it up to him’. But although 9 To 5 packs more of a feminist pinch than punch, the audience enjoyed every minute.  And when Dolly appears singing the 9 To 5 theme tune via video at the end, they were on their feet and singing along at the tops of their voices.

9 To 5 was performed in Sydney until 8 May 2022. It will tour to Brisbane on 22 May before moving onto Melbourne from July and Adelaide from October.