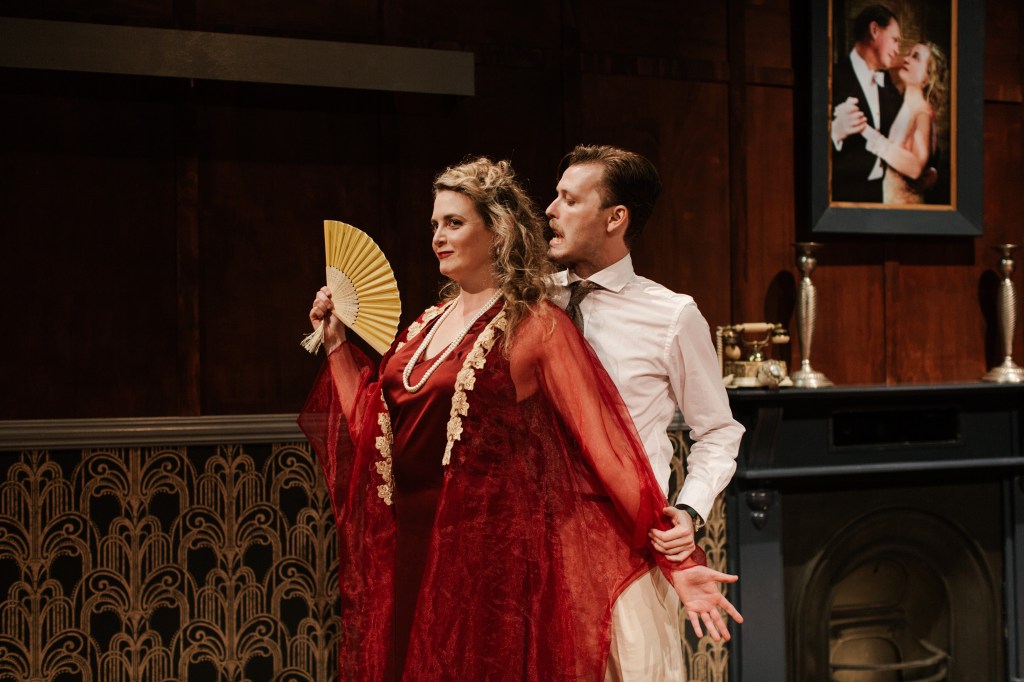 Julia Grace and Ben Andrews in this parody of a murder mystery, 2022, Photo by Ben Andrews

Have you ever wanted to kill a theatre critic? The relationship between creatives and reviewers is a complicated one. On one hand, producers need their productions to receive press in order to get the word out and build an audience. However, if the reviews are less than kind it can be crushing and create frustration and anger within the cast and crew. It’s a catch 22; a necessary evil. But what would happen if these feeling of animosity turned to grisly murder? This is but one of the questions posed in Tom Stoppard’s classic comedic farce The Real Inspector Hound, which is currently receiving a side-splitting production by Artefact Theatre Company.

Stoppard’s play within a play opens with pompous theatre critics Moon (Annabelle Tudor) and Birdboot (James Cutler) settling into their seats to review a performance of a typical British parlour mystery, essentially a rip-off of Agatha Christie’s The Mousetrap. It quickly becomes apparent that Moon is filling in for his superior Higgs, whom he loathes, and Birdboot is a sleaze who’s only really interested in propositioning the female members of the cast. They pontificate ad nauseum about the ‘sacred’ role of a critic and the competitive nature of their profession. As the murder mystery progresses Moon and Birdboot are sucked into the onstage action and become part of the plot, with bloody consequences. To reveal any more would spoil the fun for audience members like myself who have never seen the play; you’re in for a real treat if you go in blind.

The parody of murder mystery plays is deliciously devilish and the cast in this production go for broke. Everyone on stage creates a perfectly pitched performance, embracing the camp and slapstick comedy inherent in the material. Special mention must be made of the fantastic accent work of all the cast, in collaboration with voice coach Cazz Bainbridge.

Ben Andrews plays the dashingly mysterious Simon Gascoyne with flair and a hilarious clipped accent with a very Matt Berry vibe. The vampy Cynthia Muldoon is portrayed by Julia Grace in an uproarious performance. She glides around the stage in a deep crimson negligee and seems to revel in the capriciousness of the role. Also, her mangled, increasingly elongated pronunciations of Simon’s name had me in stitches.

As the housemaid Mrs Drudge and wheelchair-bound Magnus Muldoon, Bridie Pamment and Dylan Watson both possess expert comic timing and perfectly over the top facial expressions. Annabelle Tudor’s grasp of Stoppard’s rapid-fire dialogue, especially in the monologues, is exemplary and her performance is full of gloriously exaggerated physicality. The whole cast seem to be having a ball and that joy spreads to the audience.

Director Matthew Cox wrings every ounce of ridiculousness from the piece and, despite a slight dip towards the middle, keeps the piece ticking along at a rollicking pace. The thrust design of the stage works well to immerse the audience, along with Moon and Birdboot, in the play within a play and the set and costume design embraces the kitschness of the late 60s setting with wooden panelling, crushed velvet curtains, wide-collared shirts and houndstooth flairs.

After the dumpster fire that has been the last few years, Artefact Theatre’s production of The Real Inspector Hound offers Melbourne audiences the chance to go to the theatre again and have a much needed full-bellied laugh. This show is an absolute delight so go and seek out this little comedic gem and don’t be surprised if you find yourself rolling in the aisles.

The Real Inspector Hound will be performing until 14 May 2022