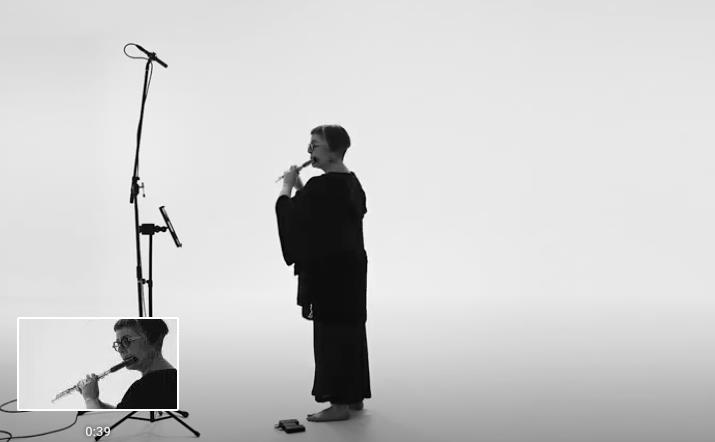 Recorded at Baker Street Studios in Sydney with the theme ‘All dressed up with no place to go’, these videos were creatively directed by Michelle St Anne and filmed by Matthew McGuigan.

If you watch the pieces in sequence you can see how the set changes.

Giving a timeless feel, the performances were recorded in black and white with great closeups of performer and instrument. Some of the musicians wear socks or slippers while others are barefoot in keeping with the theme. The set is a small studio with standing mikes. Small details like a table with flowers in a vase and a couple of chairs finish the scene. And If you watch the pieces in sequence you can see how the set changes.

The series begins with Extraordinary Mildness by Christopher Fox (2020) performed by Edwardes on vibraphone. The music undulates like fish or coral then scatter like stars. At times there is a circular melody like church bells. The mood changes again to be possibly more like falling raindrops as it flows and cascades then suddenly veers to a darker more ominous mood but then resumes its lighter tone with its insistent repeated melody.

Edwardes also plays the next piece Hook by Andrew Ford (2018) At first this piece feels to have an underwater theme which bubbles and darts with brisk changes of mood in short sharp bursts and then changes to an almost galactic background noise. For one section Edwardes uses her xylophone sticks for extra special effects.

This was followed by the shimmering, haunting Unanswered Questions by Tristan Murail (1995) performed by Lamorna Nightingale on flute. Murail is regarded as one of the first generation “spectralists” composers who analysed sound to determine pitch, as well as the length and structure of the work. The piece is rich, flowing and meditative. Pulsing with a sense of stillness and crisp precision yet at times bubbles. The work also is an allusion to Charles Ives’ The Unanswered Question.

Bioluminescence by Liza Lim (2020) performed by Lamorna Nightingale on flute was next which was like a bird showing off with sharp, fluttering and darting movements, and some trills and long breathy sustained notes.

Blair Harris on cello and electrics was next in Canon 1205 by Kate Neal and Grisha Lichtenberger (2018 rev. 2020). The piece had a dynamic, insistent rhythm; a crackling and tumbling atmosphere where the sharp staccato sounds contrasted with aching cello – my imagination conjures the sound of ice on a glacier cracking.

Harris then performed Sept Papillons by Kaija Saariah (2000). You could hear the different butterflies take wing as the bouncing, darting, quivering piece bubbled and flowed; interwove and delicately trembled. Featuring the use of harmonics – some long sustained notes were contrasted with pizzicato up and down the neck of the cello, and the work concludes with sudden anxious fast circling as a butterfly takes off. It is a work that in some ways pushes the boundaries of cello technique and Harris displayed remarkable artistry and technique.

Giacinto Sclesi’s dense and abstract Maknongan (1976) was next. Featuring Jason Noble on deep, rumbling contrabass clarinet (a HUGE instrument) like a grumpy whale with its insistent circular repeated melody and rhythm; the sounds interwoven with bubbly breaths.

We then heard Noble (this time in voluminous socks) in Entracte by Christopher Tonkin (2015) using a bass clarinet. It was quite ‘jazz’ in style with its brisk rhythm and beeps, and its honks, slips and slides. Musically it is sharply defined then subtly changes to softer and more flowing with softer, long sustained notes.

Broken Rosary by Kate Moore (2010) followed and was performed by Freya Schack-Arnott on cello. I noticed here that the second chair in the set had been overturned. The work is a tribute to Moore’s grandmother. Moore’s intimate cello is rich, flowing and insistent in its repeated waltz like pulsating circular melody, combined with a hushed, electronic atmosphere.

Schack-Arnott also performed the next powerfully haunting piece. Instructions for Improvisation 4 God Leaves the Room by Alex Pozniak (2018). We now notice that there are also three apples on the floor (alluding to The Judgement of Paris perhaps?) There is some very fast bowing and sensuous stroking of the strings at times in this darting, rumbling energetic piece.

Nocturne by Kaija Saariaho (1994) was the last poignant and haunting work, and was also performed by Serret. Here the set has been further disrupted and tilted. These tiny interventions in Lone Hemispheres: The Solo Sessions gave the digital experience an almost timeless, and surrealist feel.