An irreverent, hilarious and piercing critique of trends in the Australian arts industry.
Liam McLoughlin
[This is archived content and may not display in the originally intended format.] 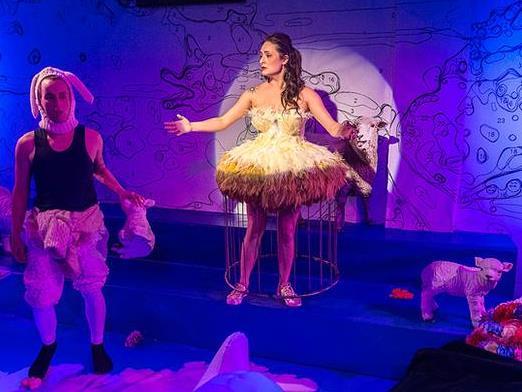 It’s hard to say when I first realised this version of La Traviata had something different about it. Maybe it was upon hearing about the premise of staging an epic 150 person opera in one of Sydney’s smallest theatre spaces. Perhaps it was during the opening moments when three plastic-smiling corporate cut-outs burst onto stage hustling the idea of ‘Opera in Jeans’. More than likely it was about the time I was wheeling a 10 foot giraffe skeleton off stage into the foyer halfway through Act Two.

The Sisters Grimm have approached Verdi’s classic with all the fidelity of an Ashley Madison Christmas Party: ‘we managed to eliminate most of the challenges in the libretto and musical score by not using either of them’. Thanks be to the theatre gods for Grimm’s unfaithfulness because in doing so they have crafted something hilarious, original, insightful and quite brilliant.

Some of the Traviata touchstones are here. The key plot points of the original are described on LED screens at the beginning of each Act and several find their mirror in the action which follows. Verdi’s Violetta must choose between the poverty-stricken idealism of life with Alfredo in the countryside or a wealthy life with the Baron in Paris. The Sisters Grimm turn this dilemma into the impossible choice for artists between pursuing bold, challenging and fresh work on a shoestring or half a shoestring, or dancing like a monkey for the almighty dollar.

There is so much to adore about this production, not least of all that it’s freaking hilarious. The satirical writing is sharp and inflicts multiple wounds on hollow corporate culture, soulless neoliberal ideology and the elaborate elitist wankery of some corners of academia. The section where Ash Flanders, Emma Maye Gibson and Zinzi Okenyo battle it out with a combination of empty post-modern jargon and dance moves like The Sprinkler is one of the cleverest and funniest scenes I’ve seen on stage in years.

The script is littered with funny ideas, like filling the wasted empty space on dogs with advertising, and the comic potential of each idea is fulfilled by superb acting. Okenyo and Michael Lewis are both strong, while Gibson is amusing and disturbing when through dance and song she portrays the fine line many artists are forced to tread between searching for validation and desperation/shame. Flanders is clearly blessed with a surfeit of comic talent. His manic first act hyperventilating tantrum about the state of the arts is breathtaking. Much of the humour of Act Two comes from set and costume designer Marg Horwell and director Declan Greene. Whimsical design and a penchant for silly ideas fuse to create a crescendo of giggles for the audience.

I must say halfway into this performance I was racing along to my first five star review. Then something disappointing happened. The penultimate section of the show turned into a Q and A with the audience. I felt the incredible energy and momentum of the first half evaporate before me in a meandering chat about community, sharing, legacy and the ethics of earning a living. As sweet as it was to hear from Beverley and Trevor about the sense of solidarity at their local bridge club, I just desperately wanted these supremely talented performers to crack on with their hysterical and at times searing critique of the commercialisation of the arts. No one would question the Sisters Grimm’s noble intent in democratising the art form by including the audience. Whether it was the best decision artistically is another matter. Then again perhaps Greene and Flanders should be lauded for sacrificing artistic merit for progressive political intent.

One thing is clear. La Traviata is more than just a gigglefest. It’s political themes are an important intervention in the Australian theatre scene at a critical time. If George Brandis has his way, these kinds of irreverent and piercing critiques of the status quo will die out. All that will remain is the annual recitation of Verdi’s operas, only in increasingly expensive and inaccessible locations.

Look forward to 2017 when La Traviata will be performed in space, to be witnessed only by those who can afford a flight on the Virgin Galactic.

With recent shows for the Melbourne and Sydney Theatre Companies after years of DIY carpark and backyard shed performances, Sisters Grimm have themselves gone mainstream. May they maintain the rage from inside the establishment for many years to come, and help bring the Australian arts scene back down to Earth.