Don't fear death; embrace it. Melissa Main and Nicola Bell use death-folk cabaret to poke fun at our mortality.
Shu Shu Zheng
[This is archived content and may not display in the originally intended format.] 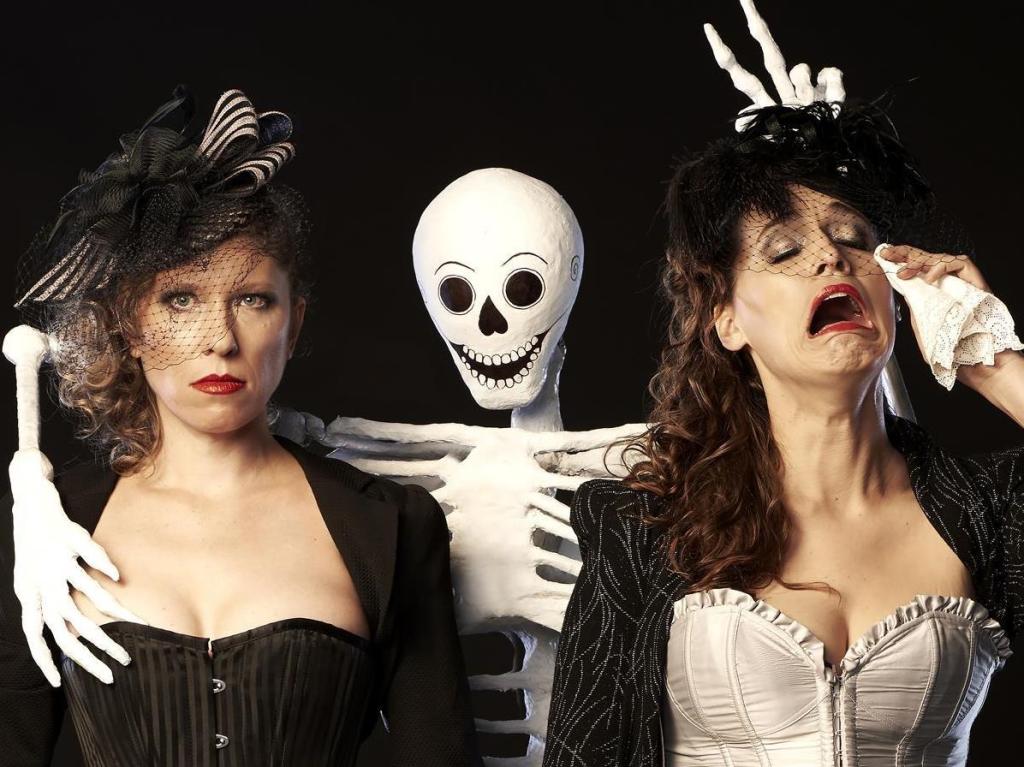 Death is a touchy topic depending on who you ask but Kick the Bucket’s Melissa Main and Nicola Bell are not afraid to embrace death. Their unapologetic Melbourne Fringe show starts the awkward conversation about death through a catchy blend of folk and cabaret. Balancing the brash with the poignant, Kick the Bucket is a funny and reflective show, leaving you ready to come to grips with mortality, with the added bonus of a catchy tune stuck in your head.

Patrons are lured into Club Voltaire Hansel-and-Gretel style, with a bouncy song drawing you into the theatre. Draped in dark shades of red and black, the tiny stage projects an intimate vibe. Housing not only Bell’s drum kit and Main’s instruments, there is also a cardboard coffin, a skeleton named Bonesy, and a retro suitcase exploding with props and costumes. Jumping from angry and sarcastic to reflective and empowered, Main and Bell share songs, stories and monologues to help us come to terms with our own mortality.

While Main and Bell’s interactions can be awkward at times, there is an undeniable musical synergy when they play together that vanquishes the nervous energy. With years of experience writing music and performing between the two of them, it is no surprise the biggest strength of Kick the Bucket is in the music: they are clever, funny, heartfelt and bloody catchy.

Main is completely enchanting. Her sheer presence sparks with the experience of a seasoned performer. Before she sings a single word, her sweeping gaze, glitter-speckled smile and guitar-playing mesmerises every patron. Her voice lifts and growls, yodels and purrs. She projects warmth with a flourish, making everyone feel comfortable enough to sing along to the catchy songs. Bell is effortless on the drums as she lifts and complements Main’s vocals and guitars. Using percussion to set the mood of the show, Bell creates the illusion of drumming with bones for some of the darker songs.

You will find it hard to find another show that pokes fun at Death then embraces it with open arms as well as Kick the Bucket. It’s hilarity chased with poignancy with a shot of empowerment — what’s not to love?

Shu Shu Zheng is a Melbourne-based digital all-rounder who loves reviewing comedy and has a terrible TV addiction. Follow her on Twitter: @choux_choux