As the Fruit Flies swarmed up and down and over the stage, the excited audience ooh-ed and aah-ed – and occasionally screamed.
Suzanne Yanko 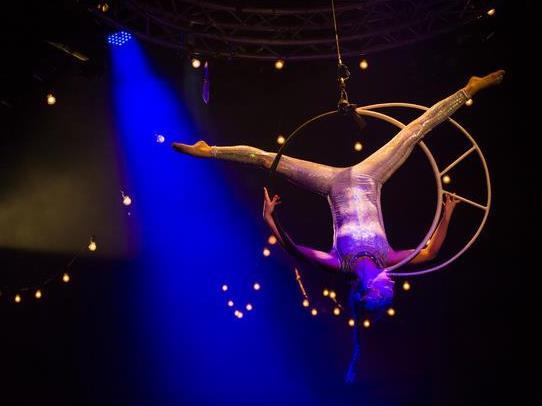 The Flying Fruit Fly Circus is growing up – but, don’t worry, it’s still the circus we know and love for its young performers (aged 8 to 18), rural base, clever ideas, expertise and sense of humour.

The circus is still true to its origins when, around 1980 the Murray River Performing Group (MRPG) began a circus project that would become the Flying Fruit Fly Circus. Involvement with Circus Oz and, critically, the Nanjing Acrobatic Troupe of China, meant there was a critical injection of professionalism early in the Circus’s development – and nearly 30 years on, it shows.

Not that any of this would mean much to the young audience that packed the Fairfax Studio at the Arts Centre for a performance of Circus Under My Bed, the Flies’ contribution to this year’s Melbourne International Comedy Festival. Kids and adults alike thrilled to the fast-paced performance as the children and teens in the troupe dazzled them with a great variety of routines.

My guest was in the upper age range of children in the audience and so was able to appreciate the story element of the show, and liked the bed that also served as a huge storybook. On the eve of moving house, a young girl has to pack her toys and books – and memories – and has a last chance to play with the circus hidden in her room – literally, under her bed.

Her dolls turn into clown-like characters, woolly soft toys become a happy bouncing flock of sheep, magicians, acrobats and others tumble out from the pages of her books. All this perfectly sets the scene for a circus with tricks from trapeze work to clowning, balancing on chairs and spinning plates (these two a legacy of the Chinese tradition).

This being an ensemble piece, it’s hard to single out performers for special mention – and indeed all played to their strengths. The minimal dialogue was clearly enunciated, so the story was easy to follow; there was care to have the older boys in place for extra security and also swift moving of props.

But the young audience was blissfully unaware of these details. From the moment the circus music struck up off-stage we were drawn into a world of colour and light, and exciting action as the Flies swarmed up and down and over the stage, while the excited audience ooh-ed and aah-ed – and occasionally screamed. One last flying leap and it is was over – all too soon.

Flying Fruit Fly Circus was Australia’s first world-famous national youth circus – and it’s still the best. And a great hour of fun besides!

Circus Under my Bed
Performed by the Flying Fruit Fly Circus

Suzanne Yanko is the editor of www.classicmelbourne.com.au. She has worked as a reviewer, writer, broadcaster and editor for Fairfax Digital, the Herald-Sun, the South China Morning Post, Radio 4 Hong Kong, HMV VOICE - and, for six years, ArtsHub.   Email: syanko@artshub.com.au