Despite some heavy-handed religious imagery, this Opera Australia production is emotionally moving and a treat for the eyes and ears.
Jenna Schroder 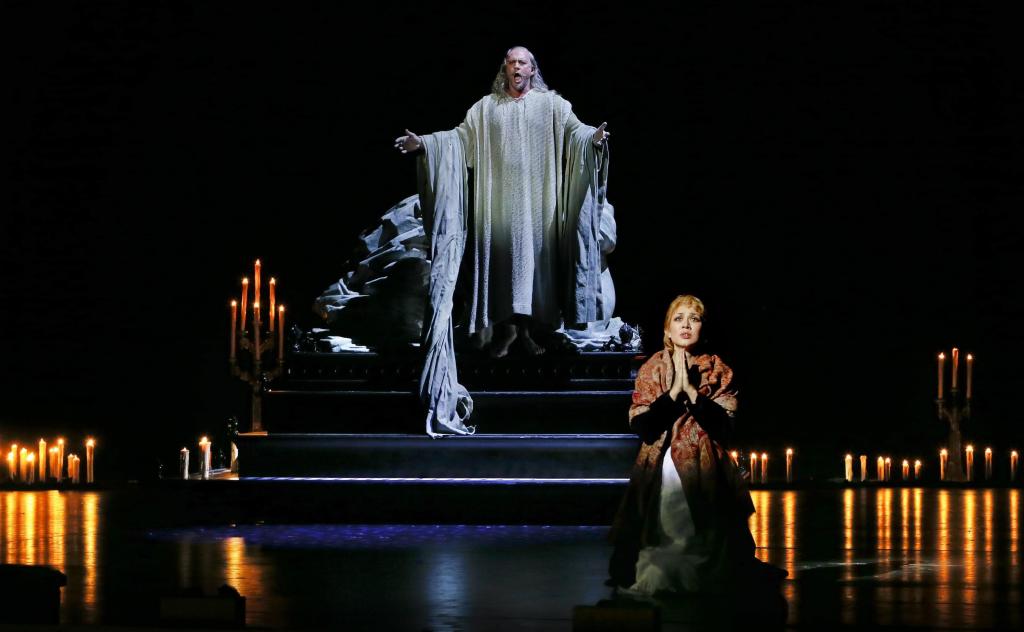 The well-known cautionary tale of the pitfalls of making a deal with the devil is given an operatic twist in director David McVicar’s production of Gounod’s Faust. The titular character, in despair over his aging body, accidentally calls upon the devil, Méphistophélès, who makes Faust an offer he can’t refuse; Faust’s soul in exchange for youth. Now young and charming, with the devil remaining at his side as an eerie benefactor, the story turns to a young woman called Marguerite who has caught Faust’s eye.

Falling for Faust, she is punished for sleeping with him out of wedlock and her faith is tested as she is dragged through numerous traumatic experiences, all while Faust is haunted by his choice to desert her.

The change of focus between Faust and Marguerite and a lack of any antagonistic behaviour from Faust or Méphistophélès before interval sees the story unravel languidly as tension struggles to build.

The libretto of Faust is of its time and entirely centred around heaven and hell. The creative team have embraced this, but at times the use of religious imagery is heavy handed. It is as if the audience has been transported to the 19th century where the threat of hell can instantly instil fear and the characters’ salvation drives home an allegorical message.

In reality, in our secular age, it is only the last act’s horror and violence against women, similar to Rosemary’s Baby and Mother! that unsettles the audience and creates a sense of sinister danger.

McVicar peppers complex social commentary throughout the production, with his depiction of soldiers returning from war particularly poignant. His interpretation of Marguerite’s trials and tribulations decries the cruel, unequal treatment of women in society. The depictions of violence against her are confronting and trigger warnings for the last act would be appropriate.

The inclusion of stereotypical depictions of drug use, almost to excuse Faust’s behaviour, and mental asylums alongside cross-dressing seems to come out of left field and, instead of enhancing the story or characters, is abrasive.

It is the performances that make Faust worth watching. Maria Mudryak as Marguerite and Saimir Pirgu as Faust deliver masterclass vocal performances. Their technique is impeccable with every note and passage, no matter how complex, effortlessly leaping over the orchestra with marvellous resonance. Mudryak’s sound is uniquely dense and rich. Pirgu is outstandingly expressive in his delivery.

Anna Dowsley as the loving and pure Siebel offers a genuine and heart-wrenching performance. Luke Gabbedy similarly shows off his acting chops as Valentin, transforming regal, tender brotherly love into rage and scorn as he curses his own sister. Teddy Tahu Rhodes as the withdrawn, omnipotent Méphistophélès isn’t given much to play with but delivers a strong vocal performance in the later acts.

With a wonderfully performed ballet interlude, Faust delivers a no holds barred production that, while at times riding on the coattails of the cast’s performances, is emotionally moving and a treat for the eyes and ears.