After such long confinement His Majesty's grand old theatre opens its doors once again.
Barbara Booth 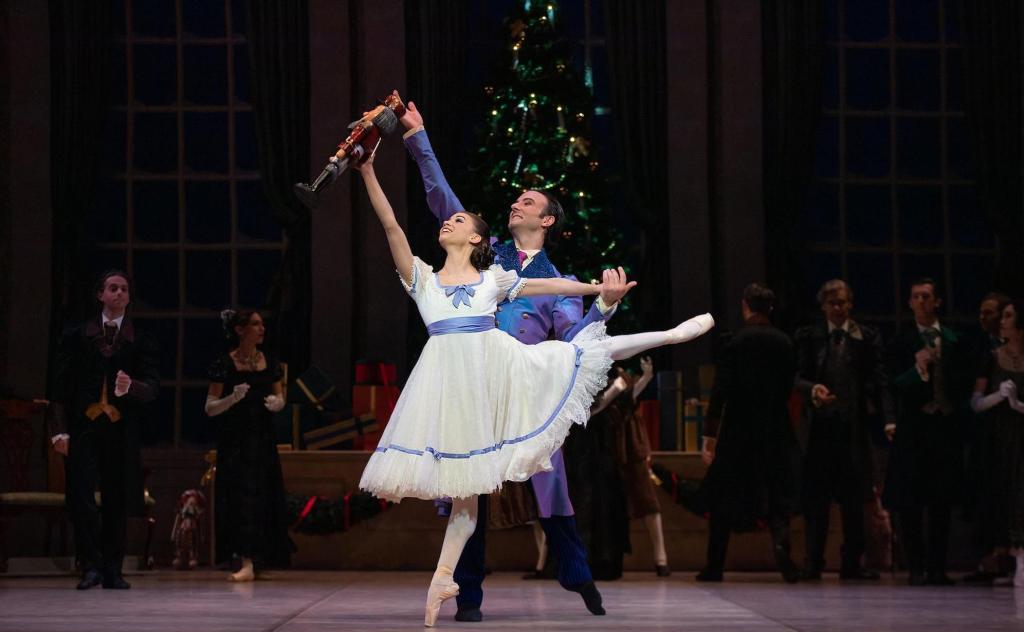 Carina Roberts as Clara and Matthew Lehmann as Uncle Drosselmeyer in The Nutcracker (2020). Photo by Bradbury Photography.

Christmas came early to Perth’s His Majesty’s theatre in Hay St, Perth, Western Australia on Saturday, 21 November, 2020. Currently undergoing refurbishment, the ornate 116-year old building looked magnificent as fake snow wafted down around it through the last of the sun’s rays.

And the crowds were there, not the usual hundred percent, due to COVID-19 restrictions, but 60 percent and, along with excited children in their ‘best’, they were more than grateful that The West Australian Ballet was still with us after the year-long deprivation.

Nothing had changed! The thrill of happy people walking past Uncle Drosselmeyer’s toy shop on a wintery day, the children throwing snowballs, Clara and her brother, Fritz and their parents. The Nutcracker, a story by E.T.A. Hoffmann we’d loved since our own childhoods, even more when it was adapted for the ballet by Alexandre Dumas to accompany the hauntingly beautiful music of Pyotr Ilich Tchaikovsky, was conducted this year by Jessica Gethin. Nothing beats the thrill of a live orchestra’s accompaniment.

Nothing had changed. The children danced as well as the adults at the party as the Christmas tree glowed in the background and Uncle Drosselmeyer enchanted them with his magic wand and delivery of presents, particularly the Nutcracker for Clara. Swathes of mist transformed the toy to the soldier hero gathering his splendid troops to outwit the Mouse King and then accompany Clara to the land of sweets and snowflakes and cartoon characters.

Nothing had changed and I feel sure, for the majority of the audience, seeing the exact repetition of this fairytale, in exactly the same settings with exactly the same costumes will be enough and, maybe, I will be the only one to question whether no change is ‘enough?’.

The Nutcracker ballet has been performed many times in many different countries and many different versions for more than 100 years. At this particular time in history people’s lives have been put on stagnate, stuck with a lot of sameness over which they had no control. Surely some new background settings couldn’t have been that difficult?

The dancers of West Australian Ballet in The Nutcracker (2020). Photo by Bradbury Photography.

Even if Drosselmeyer, performed charmingly by Christian Luck, had had a new cloak that matched his period clothes and gave him a bit more pizzazz, I would have been happy. Likewise, a change from those dark, uninspiring clothes for the dancers at the party?

Oliver Edwardson as Fritz did his best to brighten things up a bit and Asja Petrovski, perfect for the part of Clara, a light and graceful dancer, but needing to feel more comfortable in her communication with her partner and Drosselmeyer.

The snowflakes brought a needed change in their gorgeous costumes and excellent co-ordination with the Snow Queen at their helm. Candice Adea’s solo turns were always measured and timed to perfection and the duets with Julio Blanes seemed effortless.

However, while I may again be the only one, in the performances I remember best of the Sugar Plum Fairy, the dancer was an almost ethereal, delicate creature like the fairies we imagined at the bottom of the garden when we were children, dancing, as though on eggshells, to the sweet, tinkling sounds of the celesta, a mischievous individual and dissimilar from the Snow Queen!

The Spanish trio retained their vibrancy as Claire Voss burst onto the stage with a spirit that had been missing in the first half. Followed by the versatile Jesse Homes as the Russian Candy Cane man and that lively lollypop trio of Carina Roberts, Dayana Hardy Acuna and Keigo Muto,  hands were clapping again… and again. The incredible costumes, particularly the flowers made with over two thousand hand-sewn petals, will always bring gasps of appreciation and are a credit to designer, Charles Cusick Smith.

To see a gender mix of eight children happily demonstrating their new skills on stage will forever be an inspiration to other children to join the ballet, and grandparents will forever experience the joy of seeing The Nutcracker again as they share it with their grandchildren.