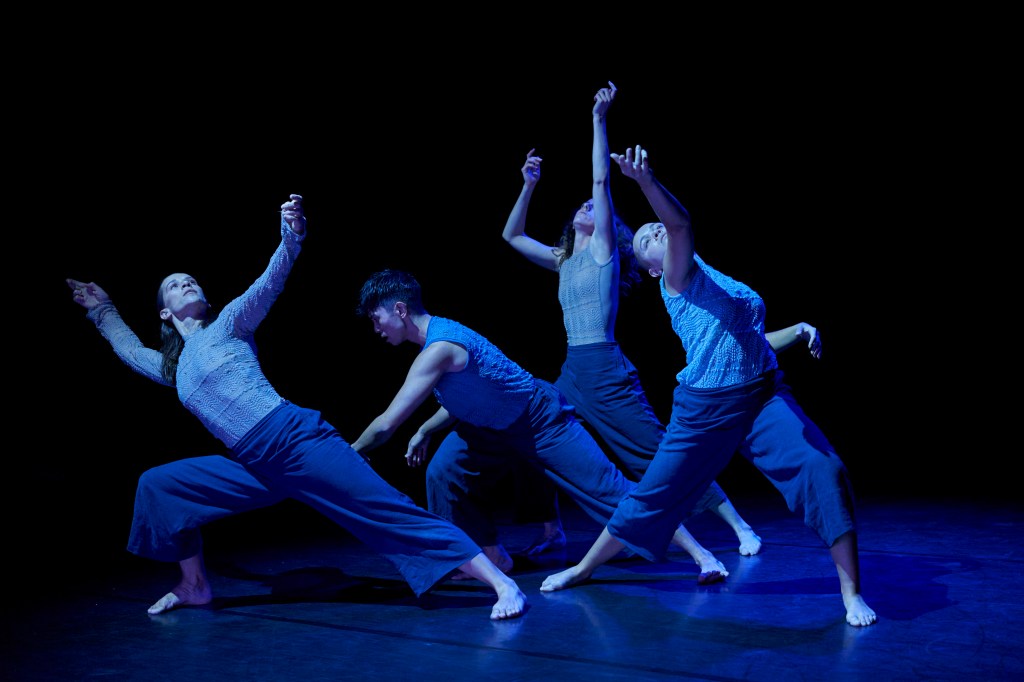 Outside Within ‘is an undoubtedly beautiful collaborative work.’ Photo supplied.

In his new role as Artistic Director at Australian Dance Theatre, Daniel Riley is aiming to explore a uniquely Australian approach to contemporary dance, inspired by First Nations cultures and a connection with the land. Outside Within, Riley’s first major work for ADT, is a collaborative effort with fellow First Nations choreographer Adrianne Semmens. Across three intimate and moving pieces, Riley and Semmens look at the ways knowledge is shared and preserved, and at the connection between identity and place.

Immerse – a reworking of a 2021 piece by Semmens – is an exploration of our relationship with water in all its forms. From creeping across the ground in slow, contorted shapes like deep-water creatures, the dancers shift to more fluid motion: swelling, unfurling, and falling back in wave-like formations. At one point they seem to be catching rainwater in their hands and in the same movement casting it aside, needing constant replenishment. Towards the end, figures moving along the ground are mirrored by those standing above them – perhaps a meditation on water as an instrument for reflection.

Bridging the two longer dance pieces is a screening of Riley’s 2021 film Mulumna – Inside Within. Filmed partly in Museum Victoria’s extensive archives, it contrasts the Western approach to knowledge preservation – minutely catalogued and sealed off from the outside world – with the embodied, active knowledge systems of First Nations peoples. Riley dances along the cold corridors of the archives, uneasy, struggling to retain balance. Picking up a Wiradjuri boomerang, he is transported back to Country with his young son. Now meaning is unlocked, and cultural inheritance can be passed on.

Riley’s new work, The Third, is a fitting follow-up to Mulumna. Building on ideas of embodied wisdom, with particular reference to songlines, this piece features a number of sequences where the dancers move in pairs, heads meeting in a merging of minds. This culminates in white lines being drawn between two of the figures, creating a bond that others try – at first unsuccessfully but then with increasing effectiveness – to break.

Outside Within appears so personal and subtly wrought that one almost feels it might be better appreciated in a more intimate setting than Norwood’s Odeon Theatre. While it is probably not the sort of work that will convert those unfamiliar with or sceptical of modern dance (being neither showy nor filled with acrobatic feats) it is an undoubtedly beautiful collaborative work, with a clear message to share. If Riley continues in this spirit of collective creativity, it looks to be an exciting new chapter for ADT and for the future of local contemporary dance.

Outside Within was performed from 10-13 May at the Odeon in Norwood before going on a regional tour of South Australia.