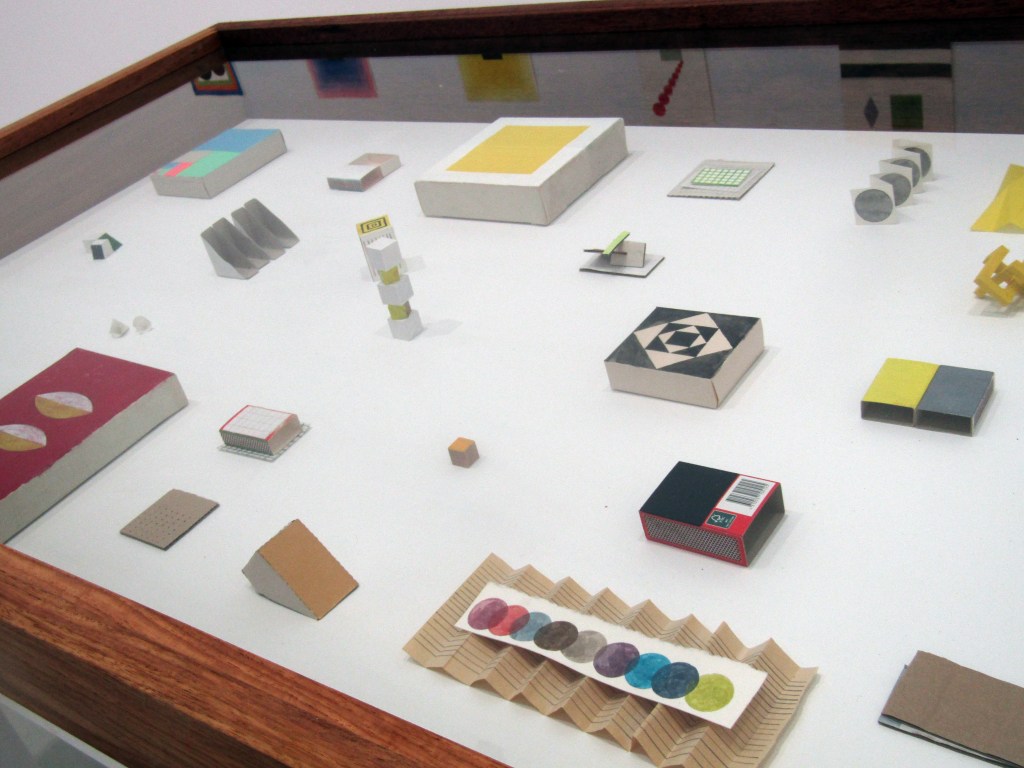 Despite being untitled, the present solo exhibition at Milani Gallery by Eugene Carchesio speaks to a world marred by military conflict and malaise. There is a prevalence of paintings, many geometric in abstraction like the Suprematist compositions pioneered by Kazamir Malevich of the Ukrainian avant-garde movement during the 1910s. The brush work has the emotive subtlety of New York School abstract expressionist Mark Rothko, whose signature colour field style emerged during the 1940s when artists turned to abstraction and expressionism during both world wars.

However, as though to defy definition, Carchesio applies these abstract forms to domestic materials like cardboard packaging and blank music sheets. This engagement of the everyday reflects a Fluxus influence. The movement, which emerged during the 1960s, sought to democratise the arts. Reverence of Carchesio’s practice resides in his ability to negotiate these antithetical styles. This is most evident in his minimalist sculptures incorporating matchboxes. There is a comforting accessibility exuded through his constructions, which have been carefully crafted from household detritus.

The musician and former architectural student is also drawn to containers for their cavities, a binary opposition to which Asian audiences may relate to through the principle of 无语 (wú yǔ), or being and not-being, which is prevalent in the three pillars of Taoism, Confucianism and Buddhism. Carchesio draws symbolism from a Catholic upbringing administered by his Sicilian mother. This manifests in an ethereal pair of cupids taking aim at each other. The composition is among a set of untitled figurative watercolour paintings. The European emergence of this Asian technique took the form of Medieval illuminated manuscripts, which were initially reserved for ecclesiastic purposes. The manner in which the translucent colours interact with the light is what draws Carchesio to the medium.

The crescendo of his exhibition is one of the titled artworks: Horizon 2022. Dozens of tiny meticulously cut-and-pasted card cones have been precisely positioned to create a monumental installation. Carchesio favours the forms because cones both funnel and amplify. In this instance, they emanate a vibrant yellow hue, an effect created by his colouring the inner surfaces with a pen. The artwork appears an optimistic projection for peace.

Carchesio cultivates symbols and forms that transcend the barriers of time, culture and scale. However, the most engaging aspect of his practice is the accessibility he affords audiences through his choice of materials and techniques. Solace can be found in this familiarity and inspiration in its sublime application.