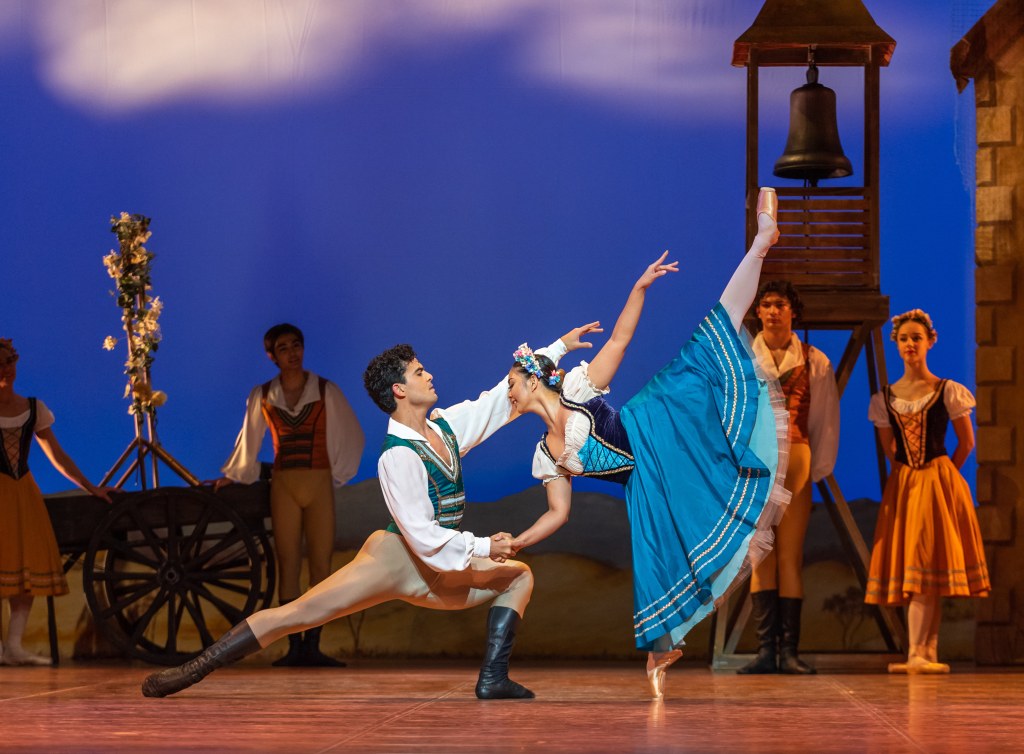 The West Australian Ballet’s Coppélia is visually delightful, accessible entertainment for people of all ages. The production is a brave adaptation of a beloved comic ballet originally choreographed by Arthur Saint-Léon to music by Léo Delibes (1870). Choreographer Greg Horsman, sets the adaptation in the small settlement town of Hahndorf, South Australia, which gently invites audiences to re-consider the work as a cultural expression of 19th-century colonial Australia. Horsman adjusts the plot, incorporating elements of parochial Australia, while skilfully utilising humour to tell the story of a lifelike doll whose presence creates havoc for young lovers, Swanilda and Franz. The choreography gives the company dancers the opportunity to enjoy character roles and entertain the audience through playful pantomime.

The prologue for the ballet adroitly establishes the context for the story. Dr Coppélius’ young daughter emulates the dance of her mechanical doll while her father prepares for their impending sea journey from Germany to Australia. An evocative film projection tells the story of their voyage, during which Coppélius’ daughter dies at sea. Coppélius arrives in Hahndorf, heartbroken. In his grief, he shuts himself away from the townspeople and builds a life-size mechanical doll, Coppélia. Life in the town continues and as the story unfolds, there is celebration after a football match during which Swanilda seeks reassurance that Franz loves her, as his attention has been diverted by sighting Coppélia. During town festivities, reinterpretations of folk and national dances include traditional European dances, as well as the Hahndorf Aussie Rules Football team, the Magpies, in a football scene which elicits considerable amused chuckles from the audience.

Carina Roberts’ Swanilda was an accessible character, and responsive to the audience, who in turn warmed to her dramatic storytelling. Oscar Valdes, who danced the role of Franz, had the chance to shine in Act III. He comfortably executed solo work with strength, confidence, and skill. Swanilda’s friend, Mary, performed by Glenda Garcia Gomez, and Mary’s love interest, Henry, performed effortlessly by Juan Carlos Osma, executed a playful duet which also won audience favour. The skittish character, Liesl, was sweetly danced by Nikki Blain. Christian Luck, cast as Dr Coppélius, embraced the dramatic nature of the role, helping move the story through to an ending which saw Swanilda and Franz happily reunited and Dr Coppélius accepted into the community as they all dance together.

The West Australian Symphony Orchestra’s live performance of Léo Delibes’ exquisite score was deftly conducted by Jessica Gethin. Jon Buswell’s lighting design delicately augmented the mood in each scene. The set design by Hugh Colman incorporated a pub and church, as well Australian landscape elements, such as eucalypts, corrugated iron roofing, and a magpie on Coppélia’s balcony. Noelene Hill rose to the not-so-insignificant challenge of costume design for the production.

As Horsman writes in his choreographer notes, ‘The key to transporting audiences to this period is the detail in the sets, props and costumes. The costumes have been inspired by the fashion in Australia at the time. They are Victorian influenced and very colourful to represent this playful ballet’.

Coppélia is an entertaining theatrical ballet adaptation that includes film projection, elements of storytelling theatre and pantomime. The production skims the surface of the Australian setting with lighthearted touch, favouring audience immersion in live music and dance in sumptuous theatre surrounds. Quirky and humorous, Coppélia enchants and entertains.