Concert review: To Barbra, With Love!

An all-star line up pay tribute to a musical icon.
Vanessa Francesca 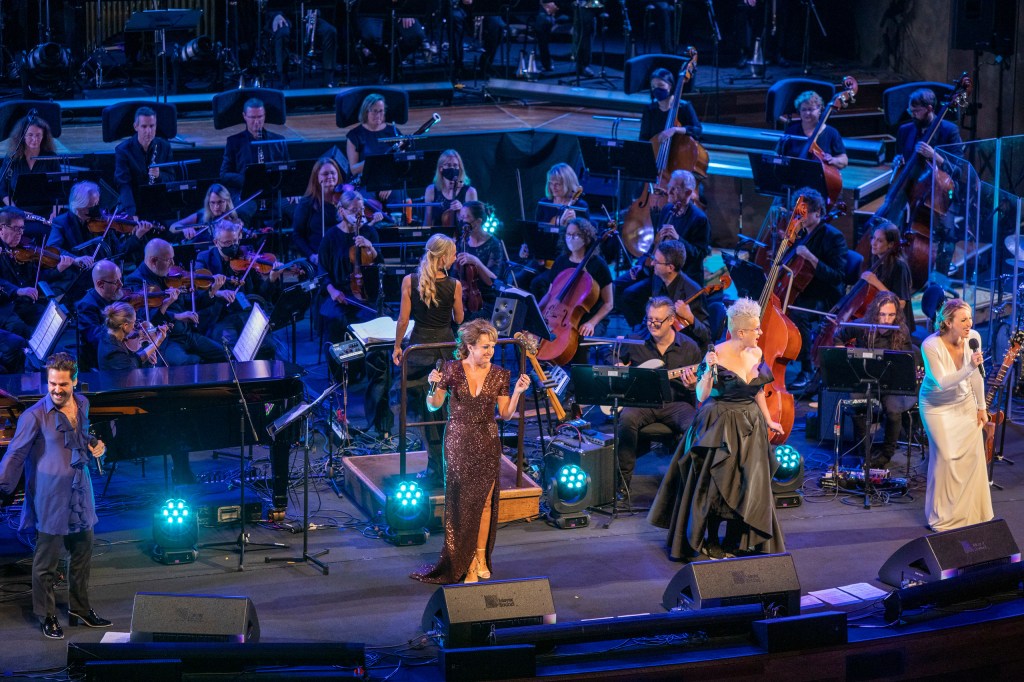 An encore featuring cooperation by all the singers made the most of the disco diva’s period pieces.’ Photo by Nico Keenan.

To Barbra, With Love! is a collaboration between Live Nation, The Melbourne Symphony Orchestra, and MSO presentations that was performed at Hamer Hall in Melbourne but is set to tour nationally. A special event celebrating the 80th birthday of American musical icon Barbra Streisand, this event celebrates her work with a cast of Australian singers, including musical theatre staples Elise McCann, who originated the role of Miss Honey in Matilda: The Musical and prolific musical actor Ryan Gonzalez, who played the role of Frankie Valli in Jersey Boys. Present too, are some welcome surprises from unexpected places that hint at the complexities of Barbra Streisand’s long career.

We were joined by the Australian Broadway star Caroline O’Connor, who was immortalised for my generation in her role of ‘Nini Legs in the Air’ in Moulin Rouge. There was also the inimitable and uncategorisable Brisbane singer Katie Noonan, whose voice ranges from the crisp bell-like tones of operatic singing to the mellow notes of professional jazz. Alongside a spirited performance by the Melbourne Symphony Orchestra led by conductor Vanessa Scammell and Director Cameron Mitchell, this ensemble of Australian talent was a riotous celebration of a woman whose musical legacy is rich, unique, and lasting.

Although perhaps the departure point for Streisand’s career is the point at which her unique skills as a singer and producer overlap with a key dramatic moment in the history of story, song and screen. The highlight of the night belongs to Elise McCann’s rendition of ‘Papa Can You Hear Me?’ and ‘Piece of the Sky’ from the musical version of Yentl. This performance had resonance partly because of McCann’s mastery of the music, composed by Michel Legrand from a story by Isaac Bashevis singer, and partly because of the connection McCann drew between Streisand the feminist and Streisand the innovator, which made for a strong performance. It was interesting though, dramaturgically, and might even have struck a resonance with some Melbourne theatre-going audiences, because of Gary Abrahams, Elise Hearst, Galit Klas and Evelyn Krape’s production of Rebecca Margolis’ adaptation of Yentl from Singers’ original text, an event notable in the range of colours it brought to a production previously set as a particular archetype by Streisand’s intervention.

McCann left no doubt that Streisand’s interpretation of Yentl was iconic, musically and dramatically in the role that Jana Zvendenuik made seem so fresh on the Melbourne stage. But there was plenty to admire in the performances by all the singers of this crowd pleaser. Katie Noonan’s passionate renditions of ‘Cry Me A River’ and later, ‘Somewhere’ (that she introduced with a funny, heartfelt touch) demonstrated why the singer who occupies a crossroad between traditions has been a muse to the popular music duo george as well as the classical composer Elena Kats-Chernin.

Ryan Gonzalez’s ‘How Lucky Can You Get?’ had range of vocal as well as delivery. Finally, Caroline O’Connor’s ‘Send In The Clowns’ was a masterful performance that was received with particular anticipation by the audience and they were joined by no less memorable performances of ‘People’ and ‘Don’t Rain on My Parade.’ An encore featuring cooperation by all the singers made the most of the disco diva’s period pieces, but the overall feeling was of a night of timeless classics in honour of a woman who invented, and reinvented, a category all of her own.

To Barbra, With Love! was performed from 21-23 April 2022 at Arts Centre Melbourne but will be touring to Adelaide on 2-3 December at Festival Theatre.