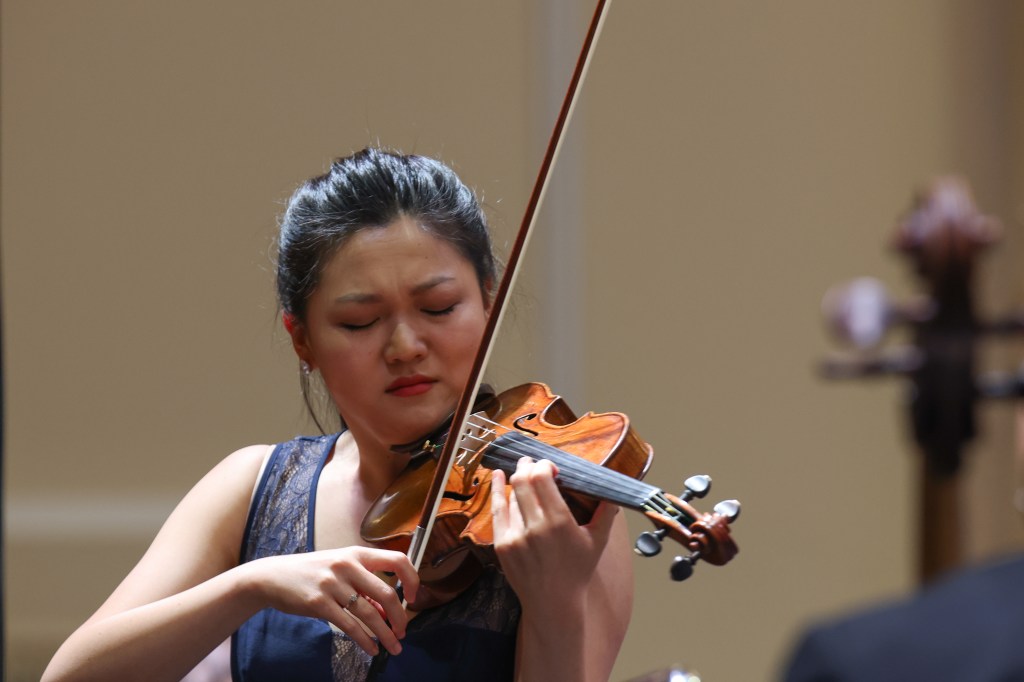 ‘Each note Sun played shimmered in the air like a perfectly-formed icicle.’ Photo supplied.

The Adelaide Symphony Orchestra’s fourth concert in the 2022 Symphony Series was entitled Serenity. The opening work, ‘The Lark Ascending’, by British composer Ralph Vaughan Williams, perfectly embodied this theme, with its bird songs and musical pictures of the idyllic English countryside.

Acclaimed violinist Emily Sun gave perfect voice to the lark as it did indeed ascend and went soaring through the skies above. The Adelaide Symphony Orchestra, under guest conductor Benjamin Northey, offered a gentle counterpoint to the violin, filling in the scenery and bringing the picture to life in gentle, muted colours. Sun thrilled the audience with her musical verve and dazzled them with her precision.

An earthly theme continued with the world premiere performance of ‘Ediacaran Fields’, the fifth instalment in Earth Plays, an orchestral cycle by Australian composer Cathy Milliken. It was very apt to have its world premiere here in South Australia, home to a world-renowned find of fossils from the Ediacaran period – a mere 600-million years or so ago – in the Flinders Ranges, now enshrined in a newly-declared National Park. Milliken came on stage to introduce the piece and then slipped back into the audience to appreciate the moment.

Somewhat unusually for classical music, ‘Ediacaran Fields’ included audience participation. Little hessian bags containing two river stones had been placed randomly on 100 seats in the auditorium ahead of the performance. At the required moments in the music, and led from the stage by two members of the ASO, the audience tapped their stones together, creating a sound surprisingly evocative of water running over a rocky riverbed. This performative element also ensured that each playing of ‘Ediacaran Fields’ was unique, as each audience tapped the stones in their own way, individually and collectively.

‘Ediacaran Fields’ began with the orchestra, and then the audience came in with their stones. Milliken used the seven days of creation as her musical theme, and each built on the one before to represent the growing complexity of life on earth and under the sea. The seven tableaux built to a crashing finale and then gradually dissolved into just the sound of the tapping stones. This was an engaging work and very much a composition of its time.

After the interval, Emily Sun took centre stage again for the exuberant Introduction and Rondo Capriccioso by the French composer and pianist Camille Saint-Saëns. This is regarded as a virtuoso work for the violin and Sun gave a remarkable performance, full of colour and vigour. There was a crystalline clarity to her playing, borne of technical excellence, that was quite remarkable. Each note Sun played shimmered in the air like a perfectly-formed icicle.

And then it was time for the highlight work, the much-loved Pictures at an Exhibition, composed by Modest Mussorgsky as a suite of piano pieces and later orchestrated into its best-known iteration by Maurice Ravel in 1922. Looking around the audience, it was easy to think that this piece was the reason Serenity was a sell-out performance for the ASO.

Pictures was a fine work in all regards and is rightly regarded as one for a confident and vibrant conductor. On this score, Northey did not disappoint, encouraging the orchestra to revel in the different moods of the ten individual elements of Pictures. Each element represents a painting by artist Victor Hartmann from a retrospective exhibition held in Saint Petersburg in 1874 following his death aged just 39. Mussorgsky and Hartmann were friends and Pictures was the composer’s musical tribute to the visual artist.

That said, this was a rather more subdued reading of the piece than is often heard, more considered than grandiose, and with a lightness of touch from Northey. And how moving to hear the final element The Great Gate of Kiev at a time when that city is very much in the news and in our hearts.

Serenity was a delightful program showcasing a diverse, but not too disparate, range of works. And applause to the ASO for its continued commitment to new music and to the works of female composers.