This irreverent mob has to be one of the best touring companies this country has ever produced.
Carol Flavell Neist 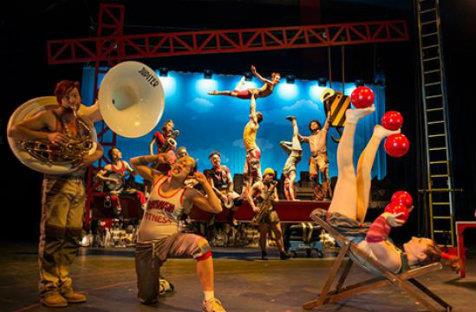 The Victorian company Circus Oz has come a long way in 35 years. Wikipedia tells us that it ‘has performed in twenty six countries across five continents including 4 seasons on 42nd Street in New York, a number of seasons at Queen Elizabeth and Royal Festival Halls in London, a refugee camp in the West Bank, indigenous communities in the Australian desert and a glass opera house in the Brazilian rainforest.’

Circus Oz is noted for siding with the underdog, and I was surprised that there was no obvious political satire and not a mention of boats in this latest production. What we did get was a bright and bubbly, audience-pleasing show that anyone, no matter what their political persuasion, would enjoy.

Just as a swan looks graciously elegant atop the water, while its feet are paddling away desperately underneath, so this touring circus has a dozen highly skilled and confident performers on stage and some 40-odd people involved in backstage, training, wardrobe and so on. That’s not counting incidental support and the team ‘back home’ in Melbourne. It is remarkable, when you think about it, just how many people the entertainment industry actually employs.

The paddlers have done an amazing job in getting this show on the road. The set is complex in that such items as a grand piano, a large girder, a fly tower, several enormous mattresses and all the flying paraphernalia have to be in exactly the right place at the right time. The stage hands are part of the show, and with a little help from the performers, they made sure we got a seamless presentation. Some of the shifts have to have split-second timing, and a failure could put someone’s life at risk. However, paddlers and performers had this show down to the point at which it all appeared effortless. Props appeared in the right place at the right time: lines were strung in exactly the right place and trapezes were swung with accuracy and élan. The show was a masterpiece of organisation, and the 12 performers were able to show us their stuff with the same ease and grace as the swan.

The doughty dozen, seven men and five women, are all extremely versatile: for a start, they come in various shapes, sizes and colours At least half of them play musical instruments, at least half of them are excellent gymnasts, and at least half are fine aerialists. Some are comic actors; some can perform sleight-of-hand tricks that had us gasping in disbelief. There are several excellent jugglers (using hands, feet, head, nose, neck and whatever else could be made to catch a ball or baton) and others whose balancing ability has to be seen to be believed. What’s more, two or three of them can dance. Whatever they do, they do extremely well. So what you get here is versatility of a high order and a full-length show that is spellbinding, funny and full of variety.

One small failing was on the speaking front. Only a few had really good voice projection and diction. Words got lost, sometimes at crucial moments. To be fair, I think some if this might have been a sound problem, but with just a bit of training all these fit young people should be able to project their voices out to the audience without strain. More individuality of character would go down well: what came across most was ‘zany’ from some and ‘camp’ from others. However, when you are working in such a close-knit team, perhaps it’s natural that members take on similar personalities!

Do see Circus Oz if they come to a town near you. It has to be one of the best touring companies this country has produced.