Circus Oz pairs astonishing moments of skill and beauty with progressive politics to create a satisfying spectacle for all ages.
Liam McLoughlin 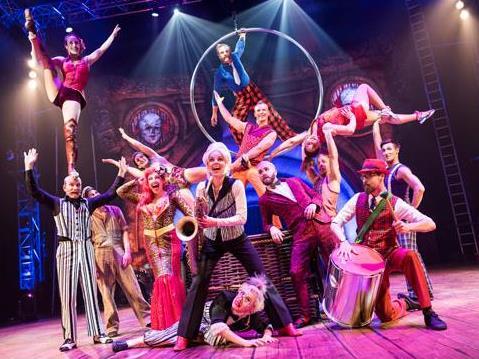 Dale Woodbridge-Brown, MC for the Sydney run of Circus Oz’s But Wait There’s More, opens the show claiming he’s not your conventional triple threat: ‘Singer. Dancer. Actor. I’m none of those. I’m gay. Indigenous. Adopted. It’s a minority soup’. With an Indigenous frontman, a gender-balanced cast, an anti-consumerism message and a call for donations after the show to the Asylum Seeker Resource Centre, Circus Oz is loudly, proudly and admirably progressive. Combine this strong social conscience with supreme athletic and acrobatic ability, a vibrant live band, a good dose of humour and barrels of personality and energy tumbling from a supportive and cohesive community of artists, and you’ve got yourself a wonderful spectacle.

Several parts of the latest offering from Circus Oz are truly magnificent. Discrete scenes are loosely tied together by a satirical commentary on consumerism, but the scenes stand alone as awe-inspiring feats of human strength, skill and beauty. Real life partners April Dawson and Kyle Raftery deliver an exquisite dance routine with a twist. The chemistry, choreography, musical accompaniment and lifts are extraordinary enough, without Raftery performing the entire sequence on a unicycle.

Similarly, Matt Wilson’s balance and strength atop a tower of red kid’s chairs would have been impressive even if the four legs of the bottom chair weren’t precariously perched atop the worst building foundation ever – a pepper grinder, Eiffel tower statue, plastic human head and glass bottle.

Olivia Porter’s frenetic white ball balancing act is not only skilful but also a resonant portrait of anxiety.

The effervescent joy of the ensemble scenes is another great strength. A delightful playfulness infuses the trapeze scene which caps off the first act and the coordination of the pole work towards the end of the second is remarkable.

I was however sharpening my critical pencil during the ‘Lion Song’, deeply concerned that lyrics like ‘A lion is a lion, he’s the biggest kitty kat’ were far too childish. When scores of children were invited to become lions on stage and have the time of their lives, my concerns somehow seemed misguided. Woodbridge-Brown guides the audience through proceedings with confidence and humour. As the kids return to their seats he warns parents ‘Make sure you grab only your kid, don’t just go for the cutest one. That’s not alright.’

While the ‘Lion Song’ is beyond reproach, other aspects are a touch disappointing. Circus Oz aim to ‘make a rollicking night of fun for the broadest possible audience’. Bringing joy to a broad audience is a laudable aim but it can have artistic costs. The big band song of fart noises which opens the second act is perhaps a good example. So too some lines which seem a bit lame or cheap, like ‘Trapeze or not trapeze, that is the question’, or creating something which is ‘easy to erect, goes up fast’. It might also explain the sledgehammer satire on the theme of consumerism. The theme is fitfully addressed with barcode costumes and songs and commentary about getting more stuff. It’s satire which feels more obvious and repetitive than sharp and biting.

Other weaknesses have less to do with appealing to a broad audience and could be resolved without losing the kids. Some scenes end rather aimlessly and the commentary from Woodbridge-Brown and Wilson is hard to make out during the trapeze. One acrobatic scene was also ham-fisted in its treatment of anxiety. Before dangling from a swing by her toes high in the air, Spenser Inwood has lines like ‘I’m sinking, drowning in an ocean of anxiety. It’s too much. This feeling weighs me down. Heavy. Slow. Deep Fatigue. I can’t get enough sleep’. Apart from it being a strange tonal shift after a whimsical acrobatic take on the world of video games, it ignores the wisdom of the ‘show, don’t tell’ epithet. It does however make Olivia Porter’s exhibition of anxiety look even more intelligent.

Yet it feels almost churlish to criticise this show. But Wait There’s More is stuffed full of heart, soul, conscience and personality. It also has more astonishing moments in one show than you’re likely to consume all year.