Peeling back the layers of consent and morality.
Annabel Harz 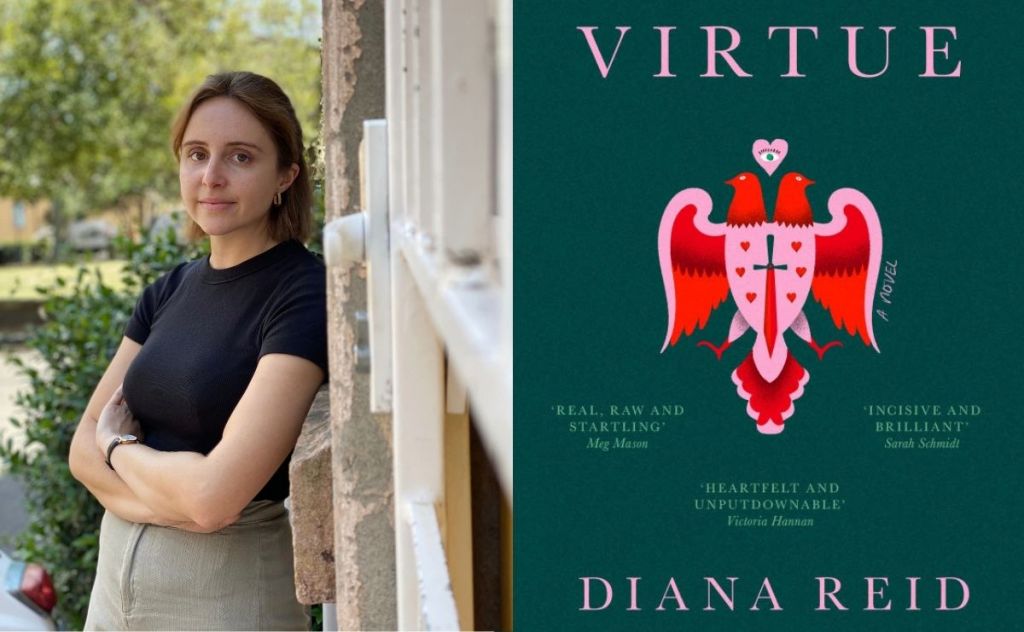 Love & Virtue is an impressive debut novel. The prose crackles fiercely, luring readers in with phrases to mull over and taste before devouring the next delicious sentence. Couple this with slang, where people ‘fang a dart’, and the richness in the eloquent language – containing no extraneous words – is evident.

Diana Reid sends the audience down one track before pivoting on a hairpin bend, continually challenging the reader’s interpretation. The resultant feeling of restlessness alludes to no easy comfort for the well-honed characters, who sparkle through the perfect balance of description and action. Protagonist Michaela and primary antagonist Eve are very different. Eve is ‘both a person and an idea of a person’, which is ‘very important to her’. Meeting at Fairfax College, Eve seems ‘fully formed, like the final version of herself’. In contrast, Michaela opines that ‘although my potential might be my own, its realisation [is] owed very much to’ other people: this ‘deferring authorship of [her] personality to the imagined gaze of others’ exposes Michaela’s lack of self-confidence.

The protagonist is a somewhat unreliable narrator, most notably when she can’t remember details of that first drunken night in O-Week, the source of much of the discussion about morality. The setting provides an ideal context for the crossover between fiction and fact, when women speak out against abuse in university colleges in the hope that it will ‘spark sweeping cultural changes in notoriously conservative institutions’. Love & Virtue powerfully contrasts personal shame with the relentlessness of media interrogation. Female readers in particular will recognise similar situations, empathising with the characters while reflecting on their own experiences or those of a friend.

The settings – single-gender residential colleges and the wider university campus in Sydney – serve as a backdrop for attitudes associated with entitlement. The divide in social class is evident: Michaela has no option but to use her Fairfax scholarship, whereas the ‘boys’ at St Thomas’ College are ‘super entitled. Which makes [them] dangerous’. Vacuous, they hold conversations in which ‘the topics range from wantonly contentious … to contentiously wanton’, unconsciously parading their privilege and arrogance. Through these differing perspectives Reid explores objectification, penetrating social class as well as gender.

The murky line between consent and being taken advantage of is subjected to scrutiny, with implications and consequences building in ever-widening parameters. If the women at Fairfax are unaware that abusive behaviour is ‘a totally fucked way to be treated’, they are also unable to assuage their doubts and relieve guilt, to reconcile past actions.

Micro-aggressions that so many women will recognise – the sexist slurs and attitudes that disempower women – are dropped into the plot as casually as they are present in real life; in the era of #MeToo and Grace Tame, this is particularly vile. Michaela’s reaction to noticing her lecturer ‘gaze … over [her] body’ is to be ‘glad’ she wore her miniskirt. The protagonist does not question the pervasiveness of such actions, nor her reaction.

The reveals in the climax cement the prevalence and normalisation of misogyny in contemporary society. The influence of sexual misdemeanour is contextualised, from the deeply personal to government-sanctioned laws. Ripples of understanding ricochet with the increasing comprehension that ‘the fact that other people might benefit from [someone’s] hurt doesn’t erase it’. Readers will be inspired to revisit earlier scenes to see if they could have found the clues to the reveals – while simultaneously pausing to draw breath, integrating all the ramifications.

Love & Virtue is an important contribution to the growing discourse around consent, a powerful first-hand narrative which examines layers of morality, questioning where and how lines are drawn.