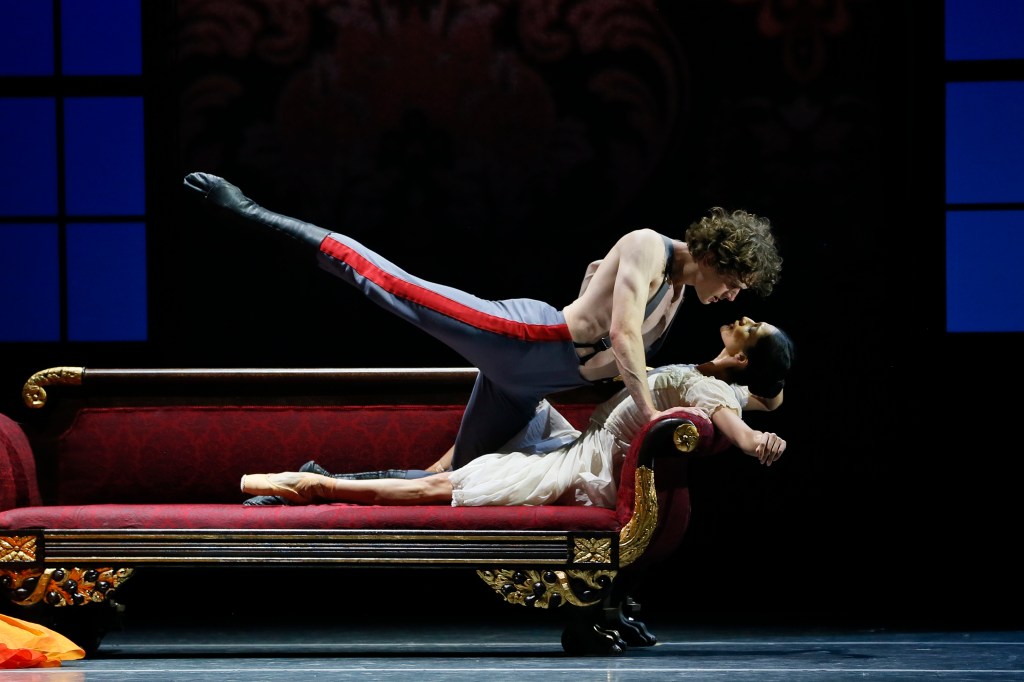 What a delight to experience the Australian premiere of this bold new work for ballet and orchestra. Conceived and created as a co-production between The Australian Ballet and the Joffrey Ballet, this ambitious interpretation of Anna Karenina was first staged in Joffrey’s hometown of Chicago back in 2019. It should have opened at the Sydney Opera House in May last year, but life intervened and so it  was Adelaide that held its debut. The production will play in Melbourne in October this year, COVID permitting.

The ballet is, of course, based on Leo Tolstoy’s novel of the same name which, along with his earlier masterwork War and Peace, ensured his place in literary history. But how do you take something of 800-plus intense pages and tell that story through dance in just two hours? That was the challenge facing acclaimed choreographer Yuri Possokhov, formerly of the Bolshoi Ballet, and award-winning composer Ilya Demutsky. Possokhov and Demutsky have worked together on numerous previous collaborations giving them a shared creative synergy.

From the opening bars of the overture, played by the Adelaide Symphony Orchestra under the baton of Orchestra Victoria’s artistic director Nicolette Fraillon, there is magic in the air.  A gentle haze in the auditorium cleverly blends with the illuminated projections of a smoky railway station, and the drama unfolds.

These projections on the scrim and onto the set give the staging a cinematic quality and make superb use of a deceptively simple set design.  The stage never goes to black, so the few pieces of set that need moving are pushed by hand in view of the audience. This simple device gives the ballet a contemporary feel. The delightful costumes by costume and set designer Tom Pye have a striking aesthetic quality and add immensely to the richness of the storytelling.

There is also a cinematic quality to much of the music, evoking the grand film scores of Hollywood’s golden age of psychological thrillers. And there is a feeling of fusion in the choreography too, with the classical canon overlaid with modernist movements to fully express the emotional journey of the protagonists.

Accomplished Melbourne mezzo-soprano Juel Riggal adds an ethereal feel as she stands side-of-stage and sings soulfully at key moments in the text. These songs are based on Russian folktales and give voice to Anna’s emotions. There are no surtitles in the operatic style, so these songs convey feelings and not the spoken word.

Traditionally seen as a meditation on love through a very Russian lens of class and duty, Possokhov’s Anna Karenina blurs those boundaries. There is passion and frustration, the hand of destiny and the temptations of the metaphysical. Tolstoy purists may argue with the ending but Anna’s tragedy is still at the heart of the story.

The leading ladies, Robyn Hendricks in the title role and Benedicte Bemet as Kitty, are lovely to watch, technically strong and brimming with the full emotionality of their characters. Callum Linnane is engaging as Anna’s lover, Count Vronsky, and  Adam Bull is strong as the cuckolded husband. His lead in the all-male scene set in the Russian parliament is impressive.

Brett Chynoweth brings charm to his role as Kitty’s husband Konstantin Levin and Marcus Morelli shines in his early solo. These accomplished principal dancers are superbly supported by the dancers of the corps de ballet who work well in their big scenes. The standing ovation on opening night was indeed well deserved.

The new Anna Karenina is a gem of a ballet; it is richly textured and looks beautiful. The narrative fairly gallops along and your attention never wanders, even when a telephone rings in the auditorium. And this is not just one for the balletomanes – anyone who loves dance, film or musical theatre will find something to appreciate in this exciting production. But if you don’t know the story, do buy the richly illustrated program or you may become a little lost in the plot.