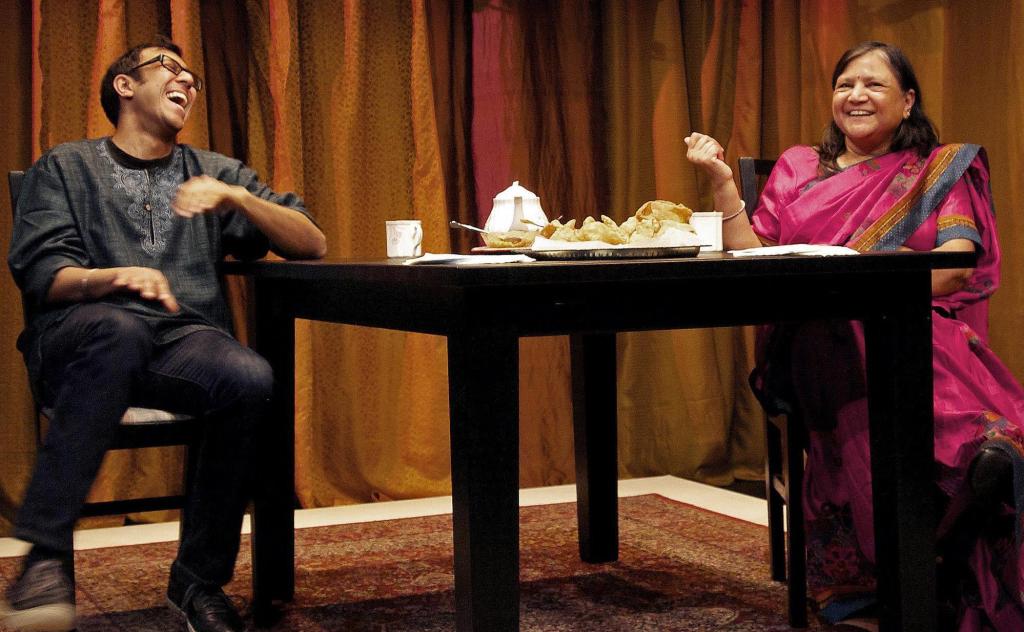 Ravi and Asha Jain in A Brimful of Asha. Image: Erin Brubacher.

You know when you’ve been invited to a friend’s family dinner, and your friend’s mum starts telling you things – funny, embarrassing, personal things – about your friend that maybe she shouldn’t? And she brings up a family argument, and tries to enlist you as an ally so she can win the argument… And then the friend and the mum start talking over one another to tell you their side of the story, but you don’t know who to believe because they’re both putting so much spin on it that anything’s possible… And you see how much they’re enjoying the banter… And you can really feel the love between them… And it’s kind of awkward, and kind of hilarious, and kind of magical… yeah, that.

Watching A Brimful of Asha is like sitting at the Jain family table. The tone is set from the moment you walk into the theatre and you’re greeted by real-life mother and son Ravi and Asha Jain. Both warm and welcoming, their gracious hospitality includes an offer of food, and you really feel like a guest in their home.

But, as with all families, there’s more to the story than warm samosas. We soon learn that Ravi has a problem. His mother and father want him married. Now. And they’ll do almost anything to make it happen. Having grown up in India, their own marriage arranged by extended family, they don’t see what the big deal is. But Ravi, born and raised in Canada, is far from convinced.

This familial showdown is the gleefully uncomplicated premise for A Brimful of Asha, with the audience taking the role of the sometimes-uncomfortable-but-always-entertained guest.

Asha combines an unaffected stage presence and a wicked sense of comic timing to explain (in the way only mothers can) why she’s right and Ravi is wrong. It’s a hilarious formula which Asha fully exploits without being overbearing or contrived. Ravi is a charming storyteller with an easy presence and a dazzling smile. It’s hard not to like him as he teeters between good-naturedly going along with his parents’ wishes and haplessly asserting his own. For all their quarrels, they’re peas in a pod.

A delightful show, performed with great wit and warmth, A Brimful of Asha is guaranteed to make you love your super-annoying parents just that little bit more.