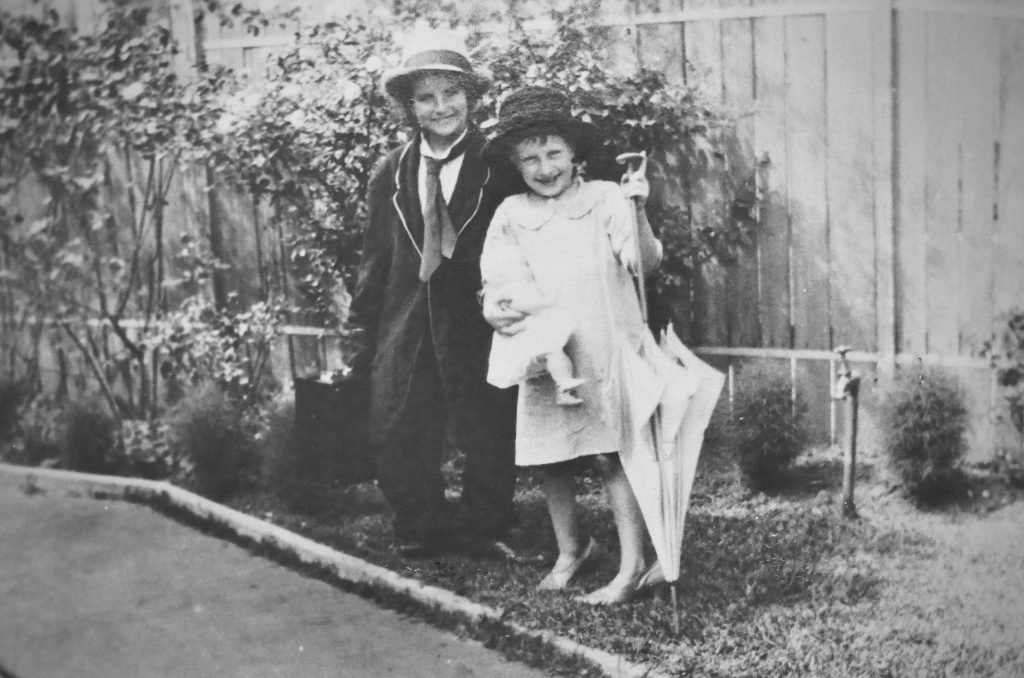 This photo of Warwick (right) and Jonathan’s grandmother Winifred playing dress-ups in 1928 hung on his mother’s bedroom wall for as long as Jonathan can remember. Image courtesy the author.

If there’s an aspect of my book The Boy in the Dress that’s going to nettle a reader, it’s my question over the possible queerness of the man at its centre: my ancestor Warwick Meale.

Warwick was mysteriously murdered in 1944 when he was 20 years old and I grew up thinking that Warwick was gay. The source of this belief is complicated. I latched onto a childhood photograph of Warwick wearing a dress and my mother recalled a fragmentary family rumour about his sexuality.

The scenario surrounding the murder also had all the trappings of the wave of gay hate killings that swept through Sydney 30 years later: a shadowy public murder site, an unidentified killer and groups of young drunk men.

My book is as much about my desire to learn about my possible gay ancestor as it is about discovering the truth behind Warwick’s murder. Despite my decade long investigation, I couldn’t find any conclusive evidence about Warwick’s sexuality or sexual behaviour, straight or otherwise. The detectives themselves remarkably posed the question over Warwick’s sexuality and a handful of possible leads looked hopeful but nothing that could stand up in court.

There’s a meme that floats around the internet about our tendency to straight-wash history. Two women who lived together, wrote love letters and asked to be buried in the same tomb? They were close companions, says the history teacher. Alexander the Great, Leonardo Da Vinci, Michelangelo, Gandhi; people are reluctant to even raise the question over available evidence or hear the gaydar blips through time. I often wonder if the explanation behind this discomfort is a misguided assumption that acknowledging someone’s homosexuality is somehow defamatory or tarnishes their memory. Perhaps it needs to be reiterated here: being queer isn’t a bad thing.

Read: Reclaiming Australian history one gay at a time

Ideas of sexuality are defined by time and place and we must avoid transplanting our current understandings onto historical times. One example is from the early 20th Century, when men who practised the ‘female role’ of gay sex, or bottoms, were ‘inverts’, but the heterosexual status of the other participant, the top, was untarnished. That said, same-sex desire can still be found by many different names and expressions throughout history.

Being anything but heterosexual has been illegal in many cultures and for the majority of Western history. Trailblazing activists from the 1950s helped queer people come out of the shadows but we existed many centuries before then. Diaries, letters and photos are excellent ways of discovering the truth about private lives from earlier periods but a diary, letter or photo could get you thrown into jail. Queer historians today tirelessly search for traces of those who were brave enough to leave them behind and then preserve them in excellent places like the Australian Queer Archives (AQuA).

Diversity of all stripes has been policed for decades, so there isn’t a shortage of criminal records of queer people who were persecuted for being themselves. Queer historians and enthusiasts know to look for terms like ‘pervert’ and other homophobic slurs if we want to find our community in a nation’s archives. There’s plenty of evidence of Oscar Wilde and Alan Turing’s sexuality, for example, because they went to jail for it.

Warwick served in WWII and was murdered so there were enough archival sources to write a book. The armed forces kept meticulous records of their resources and his violent and shocking murder was covered in the papers. But what trace would a closeted kid who didn’t tell anyone leave? Should we assume he was straight or can we leave room for the possibility that no one knew or no one was brave enough to tell the detectives or army officials?

Some historians and public figures have gone out of their way to erase LGBTQI+ people for the history books. In 1982, Bruce Ruxton, then head of the Victorian Returned Serviceman’s League was quoted saying ‘I don’t know where all these gays and poofters have come from, I don’t remember a single one from World War Two’. But there is plenty of evidence to the contrary.

Queer history is hard. Really hard. The historical relationship between gender, sexuality, identity, psychology, culture and crime has been a rocky ride. But if we don’t tackle these questions, we’re at risk of continuing the erasure of a persecuted minority.

It may make a journalist, academic or lawyer uncomfortable, but family rumours and other fragments left behind, in this domain, are actually worth taking seriously. A letter with possible homosexual undertones? A photo of a cocktail party and all the men are suspiciously well dressed? Someone who never married and worked in the arts? It’s not strictly science but an open mind is an essential component of conducting queer historical research.

My Mum was never afraid to ask questions that went against the grain. She believed that if they were left unsaid, so much would be forgotten forever. I would love nothing more than to ask Warwick about his sexuality and put the question to rest once and for all. But in a way, it doesn’t matter either way. It’s the question alone that has opened me up to a world of queer forebears and ignited a passion for queer history. I hope my book expands the possibilities in which we’re willing to see the world. There’s no need for panic.

The Boy in the Dress is out now.

Jonathan Butler is a writer living in Naarm/Melbourne. His debut book, The Boy in the Dress, was published by Affirm Press in early 2022 and his work has appeared in the Guardian and Meanjin.