The guitar industry’s hidden environmental problem, and the people trying to fix it

Making timber instruments in climate crisis, Professor Chris Gibson looks at the guitar industry, and those who are trying to address its problems.
The Conversation 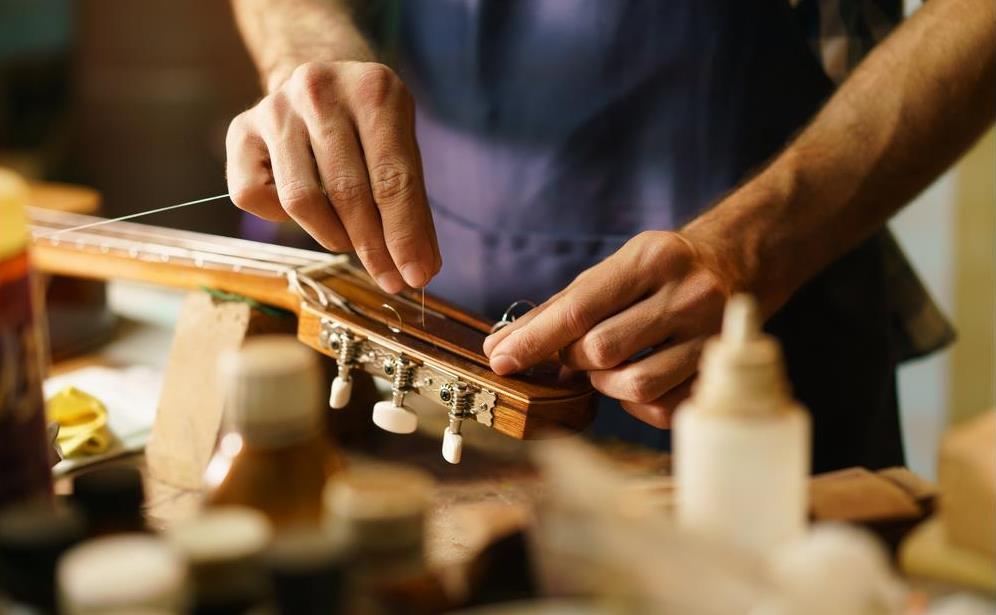 Musicians are often concerned about environmental problems, but entangled in them through the materials used in their instruments. The guitar industry, which uses rare woods from old-growth trees, has been a canary in the coal mine – struggling with scandals over illegal logging, resource scarcity and new environmental regulations related to trade in endangered species of trees.

We spent six years on the road tracing guitar-making across five continents, looking at the timber used,
known in the industry as tonewoods for their acoustic qualities, and the industry’s environmental dilemmas. Our goal was to start with the finished guitar and trace it to its origin places, people and plants.

We first visited guitar factories in Australia, the United States, Japan and China. There we observed materials and manufacturing techniques. From factories, we visited the sawmills that supply them. And then we journeyed further, to forests, witnessing the trees from which guitars are made.

Our task proved more complicated than imagined. At Martin Guitars alone, based in the US, wood comes from countries on six continents and 30 different vendors.

And the timber supply chains on which the guitar industry relies have been secretive. Many sources of wood are from places with historical legacies of environmental conflict, colonial violence and dispossession: spruces from the Pacific Northwest; rosewoods from Brazil, Madagascar and India; mahogany from Fiji and Central America.

Read: Artists, Activism and the Anthropocene: What does it really mean for change?

We learnt about the guitar’s environmental footprint, while appreciating the skills and experiences of behind-the-scenes people, and the capacities of the forests and trees to adapt. And we saw how Australian guitar-makers, such as Maton and Cole Clark, are leading the way in embracing sustainable options, salvaging recycled wood, and sourcing native species from timber suppliers in Victoria, Tasmania and Queensland.

At Cole Clark’s Melbourne factory, CEO Miles Jackson explains the unlikely story behind salvaging California Redwood from Victoria for use in guitar-making.

How are guitars made?

Around 2.6 million guitars are produced annually, constituting a US$1 billion industry.

Unlike the timber used in construction or mass produced furniture –
plantation species selected for fast growth and quick returns on investment –
guitars use rare woods from old-growth trees. This is because the slices of wood used on guitars are quartersawn: cut perpendicular to the tree’s growth rings to ensure stability and sound wave projection. The slices have to be wide enough to become the front face, backs or sides of the instrument, hence large diameter logs are needed.

Industrial sawmilling in Washington state, USA. Guitar timbers do not come from such sawmills.

From carefully cut timber, guitar parts are then carved (whether by hand or machine), sanded and assembled. The soundboard (the top) is most critical. The guitar is musical because the strings are pulled extremely tight.

With their solid bodies, electric guitars can withstand tension better than acoustics. On acoustic guitars, the soundboard must be strong, but also light, and reverberate responsively, its stiffness harnessed for tonal qualities.

At Pacific Rim Tonewoods north of Seattle, a Sitka spruce log is prepared for splitting and quartersawing (cut radially) into thin, soundboard pieces.

They had the strength to be cut thinly and yet not collapse under extreme string tension, with straight and parallel grains that, in the words of guitar makers William Cumpiano and Jonathan Natelson, ‘impart a natural symmetry to the instrument, both visually and acoustically.’

For necks, guitar-makers use mahogany (Swietenia macrophylla) or maple (Acer species); for fretboards and bridges, ebony (Diospyros species) or rosewoods (Dalbergia species); and for acoustic guitar backs and sides, rosewoods and mahogany.

Since the inter-war Hawaiian music craze, koa (Acacia koa) has featured on acoustics, electrics and ukuleles.

At the C.F Martin & Co. factory in Nazareth, Pennsylvania, internal braces are shaved underneath the soundboard. Such braces provide the instrument with structural reinforcement, but also influence tone.

When we visited the Fender factory in California in 2018, Mike Born, head of wood technology explained:

We were fortunate that the old Fender designs used very easy-to-get American woods. Leo Fender was a very economical kind of guy looking to make inexpensive instruments, and developed them around woods that weren’t used for other things. Swamp ash is a good example: it was a throwaway product from furniture wood.

Other woods used in guitar making have more fraught histories and sustainability problems. Sitka spruce (Picea sitchensis), used on guitar soundboards, comes from trees at least 400 years old, but these are increasingly scarce. Ebony is threatened in its African habitat, with tightening restrictions on its use.

Habitat destruction for agriculture and urbanisation led to Brazilian rosewood –
once considered the ‘gold standard’ for guitars –
being effectively banned from use since 1992. Guitar companies replaced it with similar species from other places, but they too were over-harvested.

Scandals have engulfed the industry since the Gibson Guitar factories in Nashville and Memphis were raided by US Fish and Wildlife marshals (in 2009 and again in 2011) over allegations of illegally sourcing and improperly verifying Madagascan ebony and rosewood.

Many acoustic guitar players insist on ‘traditional’ timbers such as rosewood.

Attachments to ‘traditional’ instrument woods have prevented heritage brands from switching to more sustainable options. As guitar historian Dick Boak explained, convincing guitarists to switch to instruments made from sustainable materials is difficult: ‘musicians, who represent some of the most savvy, ecologically minded people around, are resistant to anything about changing the tone of their guitars.’

But attitudes are shifting. Musicians are increasingly concerned about the provenance and environmental impact of their instruments, encouraging guitar brands to improve transparency and rethink their ecological entanglements.

Read: 5 ways the arts takes on the climate crisis

One necessity will be to embrace a more diverse range of alternative timbers. These will include more plentiful plantation species, salvaged trees and urban forestry.

On this, Australian brands Maton and Cole Clark are among those leading the way. Decades ago, Maton pioneered the use of Australian native species. In recent times, it and Cole Clark have worked with specialist guitar timber suppliers Kirby Fine Timbers in Queensland, Otways Tonewoods in Victoria and Tasmanian Tonewoods to established bunya pine (Araucaria Bidwillii) as a credible, quality alternative for soundboards, Blackwood (Acacia melanoxylon) for backs and sides, and Queensland maple (Flindersia brayleyana) for necks.

Tonewood specialist David Kirby, based on the Sunshine Coast, has been pivotal in supplying bunya pine to the guitar industry, harvested in limited quantities from legacy plantings dating to the 1920s.

Meanwhile, guitar-makers have salvaged timbers from urban trees. In 2018, Cole Clark’s head of wood technology, Karl Krauss, heard of a municipal council near Melbourne removing sycamore-maple trees (Acer pseudoplatanus) seen as a fire hazard. He recalled their historical use in Renaissance instruments and salvaged them for a limited run of guitars.

Around the world, relationships between sawmills and forest resource managers are also shifting. Indigenous communities are asserting custodianship of trees. Commercial relationships are being forged between these communities, specialist companies supplying guitar tonewoods and guitar firms. There is considerable potential for working with Indigenous and ecological values rather than in spite of them.

Taking matters into their own hands, guitar timber people are also planting trees for future sustainable instrument-making on their properties, and in partnership on cattle ranches and Indigenous-owned and managed lands. These efforts are guided by an ethic of care for trees, forests, communities and guitars.

The goal is to ensure wood for future guitar-making well beyond individual lifetimes. As Born emphasised at Fender’s factory: ‘We don’t have a lot of choice in what was planted generations ago but we certainly do for the future.’

On the slopes of Maui’s Haleakalā volcano, land managers are replanting koa trees.

On Maui’s volcanic slopes land managers are working with the US-firm Taylor Guitars and Pacific Rim Tonewoods (a US specialist wood supplier) to regrow koa forests.

Blue Quandong trees growing on old cattle ranches are being used by Maton.

Although these plantings are not large by forestry’s standards, once a certain density and diversity is achieved, they ‘take care of themselves’, in Kirby’s words, providing enough wood for small harvests annually without degrading ecological values. Still, access to suitable land for growing trees and skilled labour to care for them will determine future success.

Earlier in their careers, the guitar timber people we interviewed did not intend to become forest stewards –
although all profess a life-long love for plants. They have assumed stewardship roles after personal experiences of industrial forestry’s inability to sustainably manage forests to supply high quality timbers from centuries old trees.

The guitar industry has breached the factory gates, extending its activities and influence upstream, into forests. As Steve McMinn from Pacific Rim Tonewoods put it,

the world’s primary forests are nearly mined out. If you want wood for a specific purpose, you need to grow it.

Sustainable guitars in a changing climate

The most significant uncertainty facing the sustainability of guitar timbers is climate change. Global warming has already altered the geographic distribution of trees, insects and pathogens, posing severe threats to forests.

As we were on the road, insect pathogens surviving unprecedented warmer winters in the Rockies attacked and killed millions of Engelmann spruce trees (Picea engelmannii). The emerald ash borer (Agrilus planipennis) has killed millions of American ash –
of Fender Telecaster fame. Environmental scientist Jared Beeton is now working with guitar companies to experiment with using the affected spruce for guitar-making.

In Queensland, David Kirby admits his planted trees may not survive:

It could be a massive screw up of everything I’ve done in my life. But at the end of the day, what if I don’t do it? If everybody planted trees for future generations, of course, that would help stop climate change. I can’t be the one to say I’m not going to plant trees because they might not survive.

Cities may prove vital future habitats for guitar trees too. Fender’s Mike Born outlined a new initiative between Fender, the US Forest Service and the Baseball Hall of Fame, to encourage tree replanting schemes in inner cities. Like Telecasters, baseball bats are made from American ash.

As the emerald ash borer annihilates trees across the continent, the two niche industries share the same problem of securing future resource supply. The idea is to replant a variety of urban street trees to disperse the genetic and geographic base of vulnerable species.

‘We have a chance now’, Born explained, ‘to replant old street trees’. Instead of gearing management of forest resources towards short-term profit, ‘we could think a century down the road.’

Are there trees that at the end of their life cycles can have a future life? What should we be planting for the future? It’s a worldwide discussion we need to have.

The Guitar: Tracing the Grain Back to the Tree, is published by The University of Chicago Press.