Electrical fault identified as cause of La Mama blaze

Arson has been ruled out as the cause of the fire which gutted the heritage-listed Carlton theatre on Saturday morning.
Richard Watts
[This is archived content and may not display in the originally intended format.] 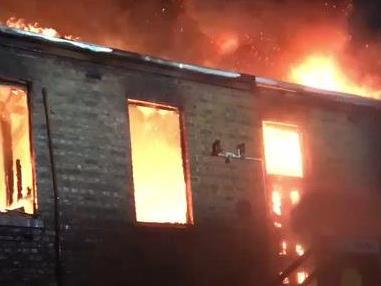 An electrical fault has been identified as the cause of a fire which gutted Carlton’s historic La Mama Theatre on Saturday.

Speaking with ABC broadcaster Jon Faine on Monday morning, La Mama’s Artistic Director, Liz Jones, said ‘it was an enormous relief’ to learn that the fire was not started deliberately.

By the time the fire was brought under control the theatre was completely gutted. Only the brick walls remain standing.

The process now will be one of restoration rather than demolition, Jones continued. ‘Basically the gables have got to come down because they’re very unsupported, but once they come to the box structure, and you’ll know that La Mama is very square … and that of course braces itself and hopefully they can brace that. They’re dismantling it brick by brick, very carefully, and storing all the bricks downstairs so they can be reused.’

Luckily, La Mama is insured, and the majority of the theatre’s archives – which were previously stored on site – have been held by Melbourne University since 2017, when a book celebrating La Mama’s 50th anniversary was published.

Shout outs to Fiona Wiseman, our preservation coordination for having moved all our archives to the @UMelbArchives last year #lamama50

The weekend’s performances of the current La Mama production, Bully Virus, were staged at the nearby Kathleen Syme Library and Community Centre, located a few blocks from the theatre.

A new venue for the remaining performances is still being sought and is expected to be announced shortly, according to director Kate Herbert.

Bully Virus, the show displaced by awful La Mama fire, carries on. No costumes, lights, props but we have music. This cast cd work in a wet paper bag! Will have new venue for this week, Wed to Sun. @LaMamaTheatre @ABCArts @theage @heraldsun @australian @australianstage @ArtsHub https://t.co/rE96Zu7TtU

Other solutions are being sought for the many other productions scheduled to be staged at La Mama in the coming months; temporary accommodation for the theatre’s staff is also being investigated.

Victoria’s Minister for Creative Industries, Martin Foley, told ArtsHub: ‘Melbourne’s arts community is extremely close-knit, this fire has brought out the best in people – offering support to make sure La Mama not only has a past but a strong future.

‘La Mama is the heart and soul of our independent theatre scene – and one of the great incubators and champions of local creative talent.

‘We’re working closely with Liz and La Mama to make sure the theatre not only has a past but a strong future too,’ he concluded.

ArtsHub understands that Creative Victoria is working hand in hand with La Mama to ensure the company can continue operating as close to normal as possible – including finding new venues for their diverse 2018 program.

The government had previously committed $225,000 in funding per year until 2020 for La Mama; that funding is secure regardless of any shows that may need to be cancelled or postponed in the wake of the fire.

Creative Victoria is also looking at providing counselling and support services to staff who need it, ArtsHub was advised.