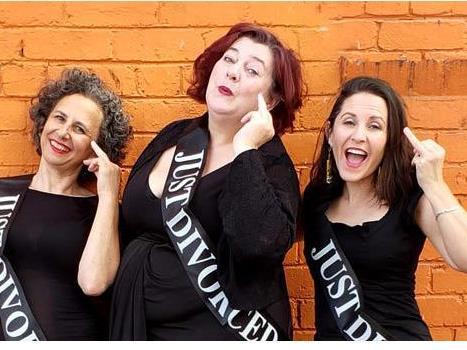 In the marriage stakes, which filly will stay in the race? Justine Sless, Nicky Barry, and Lucy Best are three Melbourne-based stand-up performers who have between them clocked up over 75 years of marriage. Now that they’re all divorced they’ve crafted a very funny show out of their combined experiences. Playing with the horse racing metaphor, the three initially take the stage in wedding dresses, introduced by a race track voice-over. Marriage vows are here rewritten to include some of the undesirable and unspoken elements of the long-term relationship – a funny start to a show that gets funnier and funnier.

One woman at a time sheds her wedding dress from behind a sheet held up by the other two and emerges post-divorce to shine as her liberated self, maybe with a few interruptions. The structure of the show allows each comic to perform a solo spot on the theme, and the show progresses from the general to the particular, hitting some poignant notes along the way but never lingering on them.

The strengths of Unbridled lies in the simple honesty of the stories, in each comedian’s willingness to be vulnerable, and in sheer comic panache. Sless is in her element with a tightly scripted performance which works well; in my view, she’s hit an individual comic peak in this show. Barry brings her usual relaxed and (seemingly) spontaneous ‘having a laugh over a drink’ comedic style and Best is her ‘tastefully outrageous’ self. I won’t give away any of the one-liners, they’re too good and need to be enjoyed in context. A couple of transitions are marked by a recording of a punk rock song by Best.

The real theme here is the women’s resilience and agency, as opposed to how they’ve been let down emotionally and otherwise by their respective ex-husbands. For all its lightheartedness there’s an essential tension to the proceedings: the commentary could easily get dark, but the performers are in full control of their material. ‘I didn’t know where you were going,’ was one audience member’s observation post-show.

Unbridled does touch on some sobering realities, such as the financial disadvantage generally experienced by women leaving long-term relationships. Given how vicious separations and divorces so often become, the balance of light and shade is handled with aplomb. What you have here are three women who have picked themselves up from adversity; it mightn’t have been easy, but here they are. And it’s damn relatable, whether you’ve been married or divorced or what-have-you.

There’s a sing-along at the end, another Best song but this time a cappella. The audience joined in, and although nothing was lost, this finale doesn’t quite come off – the song would be much improved with an accompanying soundtrack to bring it up to the level of her recorded song; let’s hope she makes this happen in time for Unbridled’s next season.

Unbridled does the right thing and leaves you wanting more, much more.