Theatre reviews: The Photo Box and The Nightline, Adelaide Festival

Unique stories are brought to vivid life in these distinctive and fascinating productions.
Richard Watts 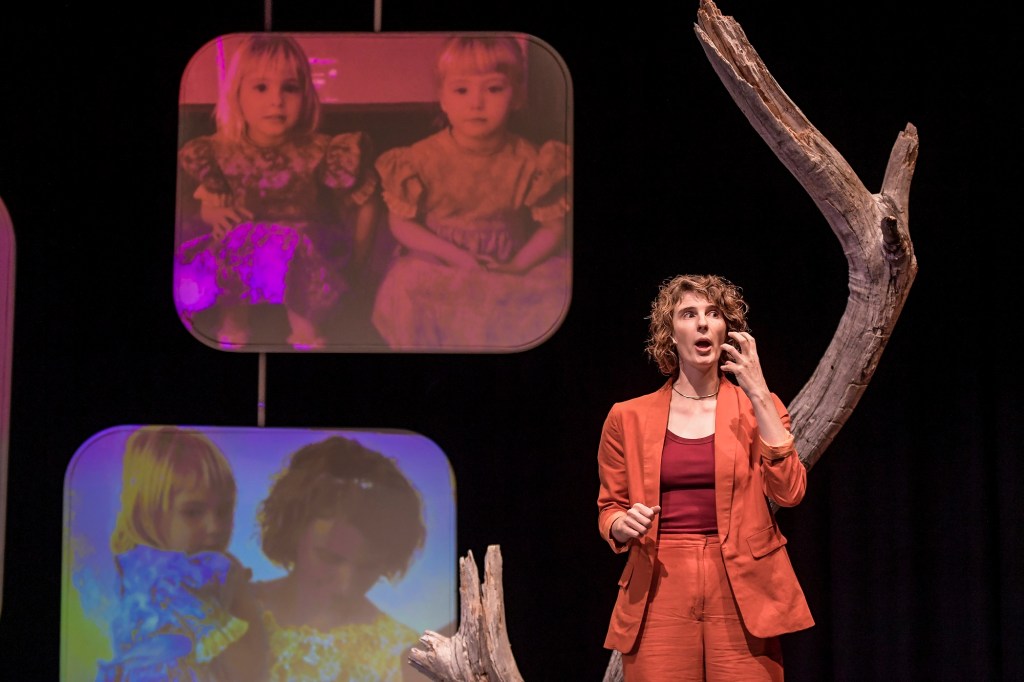 After two years of pandemic disruption, anxiety and isolation, art offers us solace and hope. These two strikingly assured Adelaide Festival productions, while differing significantly in terms of tone and execution, nonetheless share something in common at a fundamental level: they remind us of the importance of connection and community in times of darkness and disarray.

Direct address and verbatim theatre (based upon intimate observations of strangers and others) have long been a part of Adelaide artist Emma Beech’s creative practice. In The Photo Box she turns her powers of observation upon herself, drawing upon a series of childhood photographs and the memories they evoke to craft a rich, warm, and utterly engaging portrait of herself and her family.

Beech’s droll accounts of the country town she grew up in and the quirks and foibles of her extended family are judiciously observed. So too are her stories of heartbreak and misadventure, with a sequence set in a hospital’s neonatal unit especially poignant and compelling. Moments of truth-telling see Beech unflinchingly analysing herself; elsewhere she surprises with a heartening take on a joyously non-toxic masculinity. Her stage presence is delightful, while the overall staging of the production – aided by the careful eye of director Mish Grigor and a range of skilled collaborators – is charmingly imaginative.

At times we see the world solely through Beech’s eyes, at other moments filtered through the eyes of her Danish boyfriend, with his reactions to her family’s eccentricities and traditions especially memorable. A piscine presence – foreshadowed in a singular way – adds a moment of surreal yet assured physicality, while a discussion about the ethics of Beech’s art adds another fascinating layer atop the proceedings.

The magic of The Photo Box comes from the careful accretion of detail and the cumulative effect of Beech’s stories. With a simple phrase or a concise image – aided by Shalom Almond’s carefully shot images – she charms and disarms, pulling the rug out from under her audience in the most winsome of ways.

Like The Photo Box, Roslyn Oades’ The Nightline is an exquisite piece of storytelling, though in this instance originating from a multiplicity of perspectives – the sleep-deprived views of shift-workers, insomniacs and the incurably restless.

Oades’ practice has long focused upon audio-driven and verbatim performance. Here she skilfully weaves together the accounts of hundreds of individuals who, over the preceding months, have called a late-night telephone number between midnight and 6am and anonymously recorded their messages for whomsoever might be listening.

A struggling university student expresses her fears about letting her family down. Late-night revellers giggle and slur. A nurse who has not spoken about her sister’s suicide for months tells us her dead sibling’s name. An elderly man recalls a childhood misadventure. An elderly woman sweetly wishes us goodnight.

The susurrus of their comments and confessions unspool from the handset of an old-fashioned rotary telephone, dozens of which are arrayed across the dimply room, into which we are guided by a stern and largely silent concierge. By plugging and unplugging a telephone jack, each audience member curates their own journey through the sleepless hours before dawn, while Bob Scott’s superlative sound design binds the work together, blending moments of heartbreak and terror with hilarity and charm.

The addition of evocative lighting cues choreographed to coincide with certain shared stories and sounds ensures that our experience of listening to The Nightline is a communal one, rather than completely atomised, further enhancing the power of the work, while Oades’ exacting curation ensures a focused and compelling experience.

By turns eerie, delightful and deeply moving, The Nightline is a national portrait of Australia at night; a striking reminder that while many of us are sleeping, others are wide awake and keen to share their thoughts – intrusive or otherwise – with the world. All we have to do is listen.