A doubles marital game of sex, lies and wilful self-deceit.
Thuy On 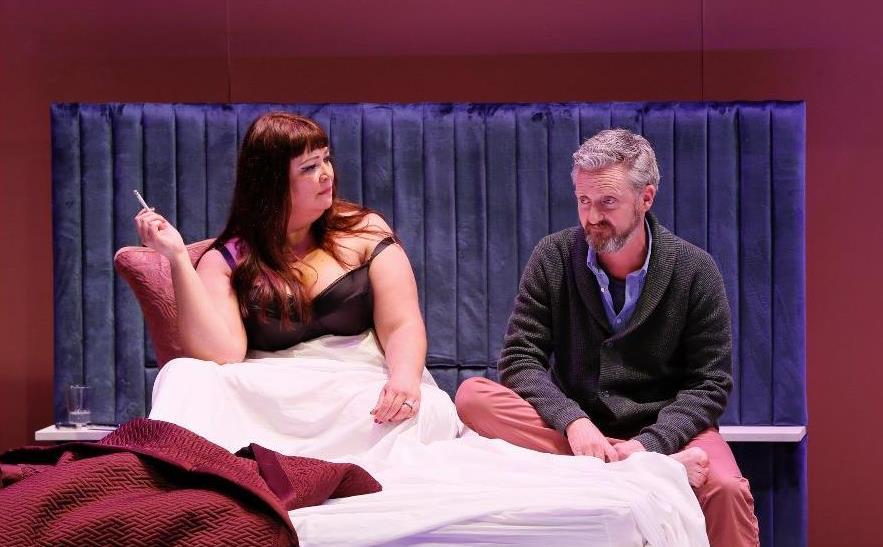 Being compared to the likes of Oscar Wilde, Noël Coward and Molière seems an unreasonably high expectation for French playwright Florian Zeller to live up to but he did impress during his last Melbourne Theatre Company (MTC) show, back in 2017 with The Father. Can he do the same with The Truth? Can this social comedy be glittered with a high boost of wit and bon mots and still work as affecting drama?

Set in Paris and Bordeaux, Michel (Curry) is married to Laurence (Banas); Michel’s best friend, Paul (LaBonté) is married to Alice (Milosevic). Everything seems to be ticking along satisfactorily in their respective unions. However, Michel and Alice are having an affair. That’s one thing that’s undisputed in a play where everything else is subject to interpretation, depending on who you believe.

Presented in English by translator Christopher Hampton, The Truth explores the slipperiness of conjugal vows and long-term marriage boredom and the benefits and repercussions of being creative with the facts. Michel and Alice meet in random hotels for a bit of fun but despite the duration of their fling (somewhere between six months and a year) their engagement with each other seems a purely sexual one. However,  Alice wants more. Maybe an entire weekend away instead of these opportunistic one-night trysts?

Curry as Michel is obnoxious and self-serving in his desire to keep his 20-year old relationship with his wife, as well as his mistress and his best friend. For him, they are to be placed in separate compartments. He seems impervious to the twin damage of cheating on his partner and cuckolding his  mate. Michel is a pathological liar by necessity.

But it seems that Laurence and Paul are suspicious and Michel is not just a terrible liar but self-delusional. He’s probably not that great a tennis player either.

The Truth sets itself up to be a satirical expose of  sex and lies but this is no Les Liaisons dangereuse (which incidentally was also the work of Hampton as screenwriter). The script here is repetitive and dull rather than sparkling, and the acting more in line with caricature than realism. Everything seems to be overplayed: a farce with a lack of subtlety and a lack of trust in the audience to figure things out. Running at 90 minutes sans interval it felt like a stretch too long.

The set by Marg Howell is sleek and elegant enough but really, you could be anywhere. There’s no attempt to put a Parisian or even a Bordeaux spin on it.

Seeing feckless, hypocritical Michel get some kind of comeuppance towards the end was almost worth the wait but audience beware: all four characters are unreliable narrators. As the web of deceit spooling from everyone becomes more tangled, the quartet do their best to entertain. Curry though is too heavy-handed whereas the others strive for a more even tone. All are let down by dialogue that’s pedestrian rather than Wildean in repartee or wit. There’s none of Molière’s sophistication here either, or Coward. Maybe there was something lost in translation.