A masterful interactive tale of the trials and joys of fatherhood.
Tinashe Jakwa 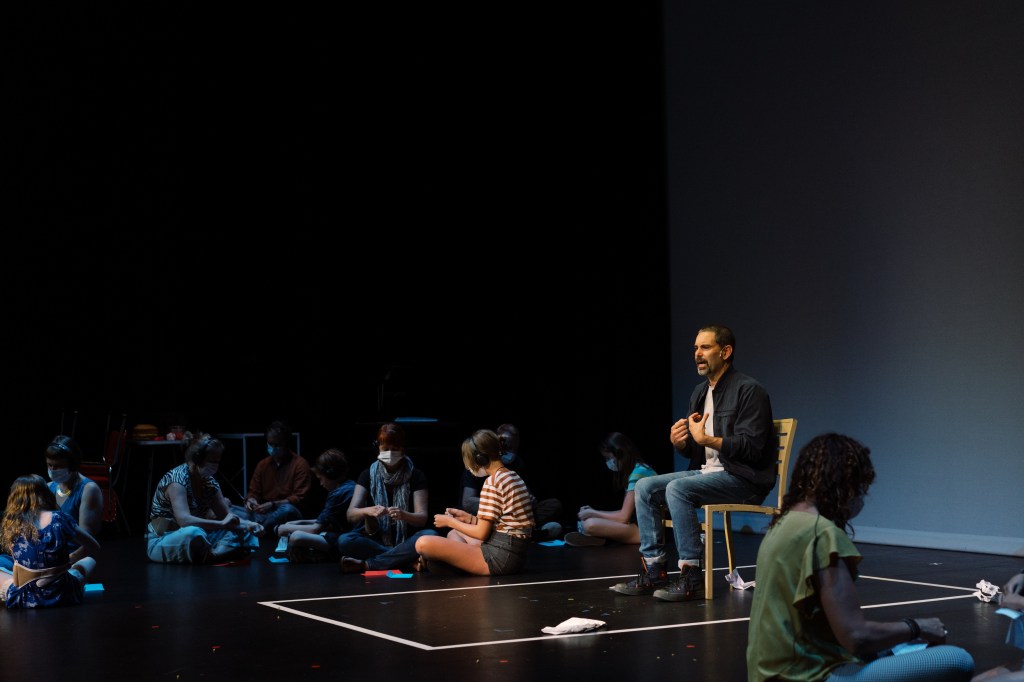 ‘Mortley’s gripping performance and delivery bring the soul of the work to life.’ Photo by Ben Yew.

As traditional gender norms are challenged and celebrations of fathers and their roles in our lives abound, The Smallest Stage by Kim Crotty offers honest and sobering insight into the human trials and tribulations that complicate fatherhood. This interactive, multimedia, semi-autobiographical work explores Crotty’s efforts, while in Dartmoor prison, to maintain and rekindle his relationship with his children. Crotty did so through storytelling and the art of illustration after being sentenced to two years imprisonment for growing and selling marijuana.

Here lies a love story that neither masks nor explains away a father’s failings. His story is a superb illustration of how we are not defined by our shortcomings. Through this work, Crotty models what it means to practice transparency and accountability with the children in our lives. From misogyny and family violence, Crotty leaves no stone unturned. He does this respectfully and with great sensitivity to the needs of young theatregoers.

The set is simple – a small, white rectangle in the middle of the large performance space at Perth’s Studio Underground. One man, Ben Mortley, embodies Crotty’s life accompanied by 20 volunteers who have no prior experience of the performance. The volunteers – 10 children, each accompanied by a parent – receive instructions on what to do and how to act through headsets. As they experience the show for the first time, they serve as stagehands, moving props onstage to re-enact moments in Crotty’s life.

Mortley’s gripping performance and delivery bring the soul of the work to life. The audience is not called upon to absolve Crotty of his failings as a father or as a man. Crotty voluntarily places himself in the mercy seat and, through Mortley, offers himself as a sacrifice, hopeful that this act of atonement will bring him closer to his children. The Smallest Stage highlights the ways in which life’s most difficult trials are instrumental in setting our feet on a level path, one where we can be honest with the people in our lives, experiencing gratitude and rejoicing in the love we too often take for granted.

For volunteers to wholeheartedly place their trust in a show’s creators and willingly receive instruction further highlights the beauty of this work. Essentially, parents and guardians accepted Crotty’s invitation to embrace vulnerability. They accompanied him on a perilous journey that likely revealed their own shortcomings as parents. They sat and moved with the discomfort of the work as they embraced their children, confronted with their collective and individual demons, looked toward love and tenderness, and learnt that they too are not defined by their human failings.

The Smallest Stage is a masterful work, with full credit to the entire cast and crew – volunteers included. Here, there is sincerity, love, and tenderness in abundance. The show is appropriately slow-paced and has a great deal to offer for audiences young and old, and from all walks of life. Theatregoers would do well to purchase a ticket next time The Smallest Stage is in town.

The Smallest Stage was performed as part of Perth Festival from 23 – 27 February 2022.