A monologue about climate change and extreme disruptions in temperature.
Ned Hirst 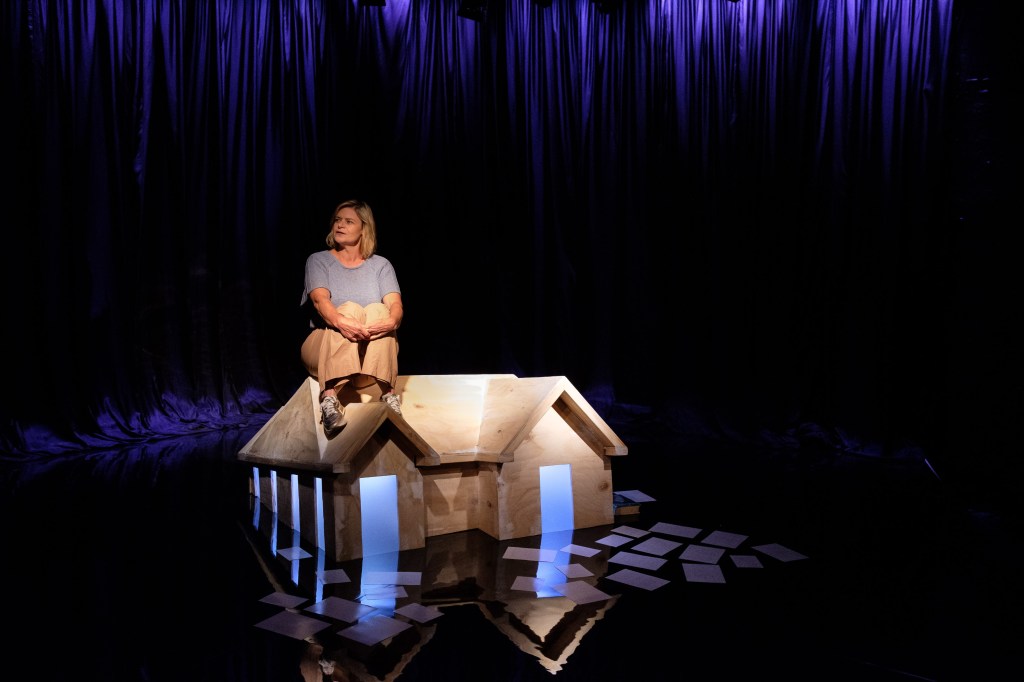 ‘It is a celebration of winter and cold as well as a warning about climate change.’ Photo by Clare Hawley.

A small wooden house protrudes from the floor at an angle, as if partly submerged.  This constitutes the entire set for Noëlle Janaczewska’s The End of Winter but over the course of the play it proves a very effective design. In evoking both rising sea levels as well as the form of an iceberg, it perfectly complements Janaczewska’s themes. Lit up from within, its mood seems to change with the restless mood of the work itself, sometimes sombre but also sometimes rather playful; at times a symbol of impending climate catastrophe, at other times resembling a cubbyhouse. The emotional turbulence of the work is well supported by Kate Gaul’s direction, Becky Russell’s lighting and especially Nate Edmondson’s score. Some of the strings towards the end of the play were particularly effective, like the mournful yearning of distant animals.

To call this a play is perhaps to give a misleading impression. It is really an extended monologue, the text for which might have worked effectively as a novella or an essay. The narrator, played by Jane Phegan, variously tells stories, myths and recites facts about winter (and cold in general). Its point of departure is Sydney during the bushfires of the 2019-2020 summer. Horrified by the oppressive smoke and heat and, perhaps even more acutely, by the fear that climate change will mean the loss of winter entirely, the narrator embarks on her own search for cold places.

This, together with stories about her mother dying in England, constitutes the plot but it is not told in a linear fashion, nor is the focus necessarily on events. There are lengthy discursions into writing about winter, the geography of cold places and Antarctic exploration.  Described in the abstract, it might be hard to see how this all holds together as a piece of theatre but it does.

The success of the work depends in a large part on Phegan’s performance, which consistently achieves the right proportion of whimsy and melancholy to suit the mood. Her voice, taken by itself, would give Janaczewska’s words an extra dimension but combined with the set, lighting and music, it becomes something richer and deeper. It is a celebration of winter and cold as well as a warning about climate change. It is also, most movingly, a reflection on the nature of loss itself.

The End of Winter will be performed until 12 February 2022