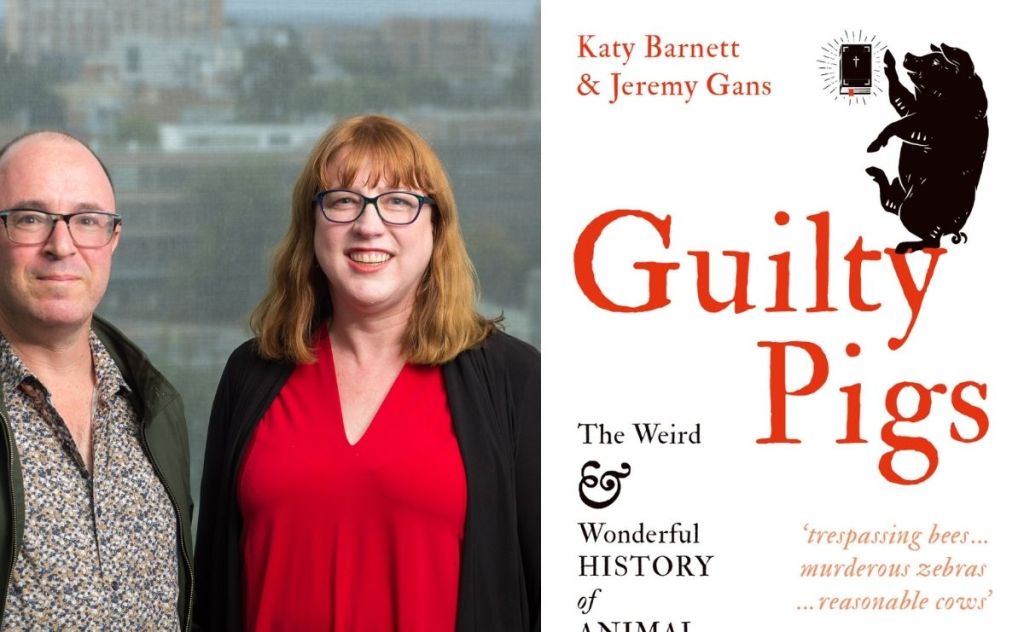 ‘The book is broken into seven core chapters, exploring the law as it relates to owning animals, controlling, blaming, understanding, harming and protecting animals.’ Photo supplied.

If you’ve ever wondered whether the law is an ass, look no further than Guilty Pigs. This detailed book explores a wide range of ways in which the law and animals intersect, from the ancient Irish Bechbretha (or ‘bee law’), to medieval murder trials for pigs and wolves, to 16th Century French winegrowers seeking punishment for green weevils, to legal wranglings about the use of police dogs in evidence and searches, to recent court case discussions about animals’ right to the copyright of their images.

Charting a historical journey from biblical and ancient Roman times to medieval courts, through colonial Australia and into the modern day, Guilty Pigs provides a wealth of information on the antecedents and precedents of today’s laws in Australia and in other parts of the (largely) European and Western world. Every page is full of interesting facts and legal statements, and for those who’ve never thought about animals and their place in the law, Guilty Pigs will make you wonder why not.

Written by animal law experts Katy Barnett and Jeremy Gans, Guilty Pigs is far from a legal tome filled with jargon and longwinded sentences. While the authors do include quotes from legislation, judges and lawyers across the millennia, they also interpret and explain these occasionally obscure quotes. The book is also filled with examples that elucidate the laws, with each section generally starting with a surprising (sometimes distressing) example that illustrates a legal principle. Along the way, readers will learn about torts, criminal law, private law, trusts, common law and more – and how these aspects of the modern judicial system came about.

The book is broken into seven core chapters, exploring the law as it relates to owning animals, controlling, blaming, understanding, harming and protecting animals. One thing that stands out is how much we humans have changed how we think about and treat them. The final chapter looks at ‘…the prospects for a partial change of approach, putting concerns for animals either ahead of, or at least equal to, concerns for humans.’

Guilty Pigs demonstrates just how inhuman we humans can be – and have been. From the public (criminal) hangings of pigs or elephants to the cruel treatment of animals blamed alongside people condemned in witch trials, to recent revelations of cruelty in the greyhound industry, the law has often treated animals in a way that we are only now, in the 21st century, challenging and changing.

As you’d expect, these laws don’t just speak to our relationship with and views of animals; they also reinforce and embed discriminatory treatment of slaves, children, women and homosexual people.

As they explore a wide range of examples from across the ancient and modern world, the authors often reflect on the fact that we humans can’t seem to make up our minds about animals, their ability to decide for themselves, whether they are wild or domesticated, whether they can be controlled (and therefore blamed), and who should pay for damage, injury or death caused by animals. Sometimes the answer depends on the era, sometimes on the country in which the ‘crime’ occurred, sometimes on the sentiment and anger felt by the people or the victim impacted. What becomes clear is that ‘…human laws about animals are almost always motivated by human concerns, and specifically concerns for humans.’

As well as using examples to explain legal principles and historical practices, the authors also provide in-depth analysis of recent cases that demonstrate how the law has changed as our understanding of animal behaviour has changed and how our understanding of human behaviour and intention affects how the law is applied. One example is the Lindy Chamberlain case, which included testimony about dingo behaviour that was later shown to be inaccurate. For anyone with a passing interest in law and its varied applications, this book is an enlightening read.

It is also, at times, a distressing read. Some of the examples include death and injury to people, children and animals. Before the fifth chapter, ‘Harming Animals’ gets underway, the authors warn readers that some may want to skip that section. These stories are a tiny proportion of ways in which humans have been – and are – inhumane towards animals. And the law is often not on the side of the animals, although the authors explain legal avenues are available for prosecuting cruelty towards animals and protecting animals.

Our relationship to animals, and therefore our beliefs and laws have changed over the centuries, so it’s refreshing to read in the final chapter that the law is continuing to change the way it sees animals. The final chapter, ‘Law’s Animals’, could only have been written in modern times. In the end, the authors talk about their desire to ‘look for many ways to coexist with other animals, big and small. That includes all the laws, big and small… addressed in this book and which we hope will eventually spread humanity’s mantle to all of the world’s animals.’ It’s tempting to wonder if Barnett and Gans will write a follow-up note in years to come when animals take another step forward into equality under the law.