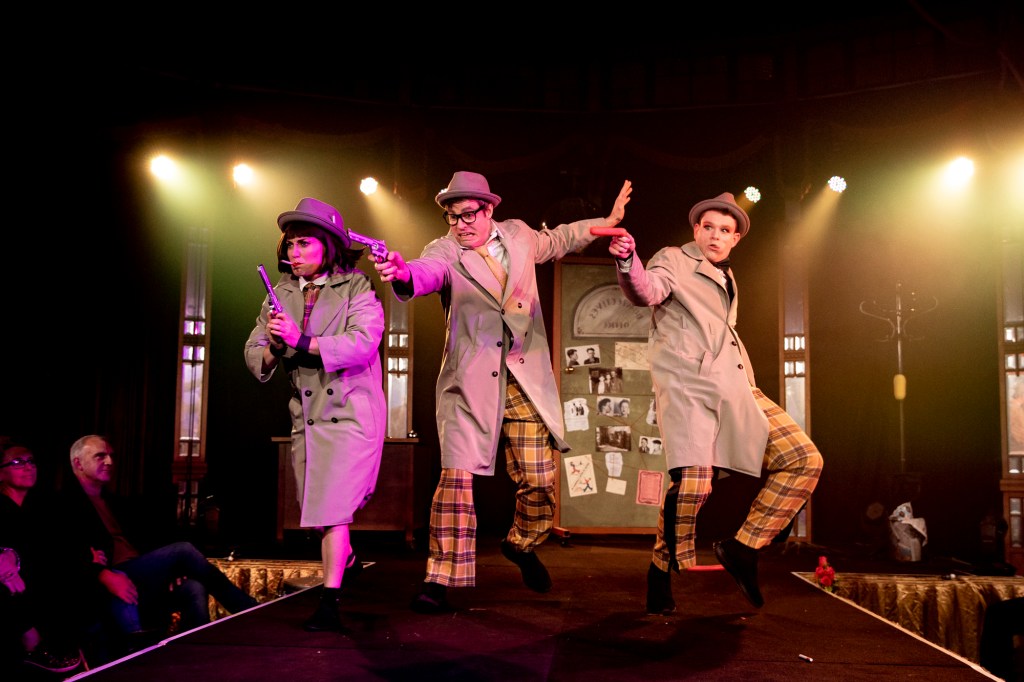 ‘The performers look like they’re having fun, and easily achieve their aim of making sure the audience has fun too.’ Photo supplied

The creative minds behind Dummies Corp’s latest ensemble circus show have certainly found abundant inspiration in its film noir setting. There are tricks with trench coats, fedora hats, and cigarettes, juggling routines involving balled up newspapers and office desks at the detectives’ headquarters, nightclub singers moving on puppet strings, and acrobatic fight sequences. And, of course, all the atmospheric trappings, from eerie music, to fake blood and dark underworld haunts. The performers carry it off with plenty of physical comedy, a few dirty jokes, and a touch of burlesque flair, all in an intimate setting with limited space and props. It’s high-energy, easy entertainment from these reliable Fringe favourites.

Beginning with the impressive rope-climbing sequence that opens the show, the acrobatic routines are for the most part compelling and well-executed. The detectives climb on top of each other, fling themselves around and perform balancing acts to frequent and deserved applause. Not all of the juggling numbers go quite as smoothly as planned, but the performers have enough stage presence and good humour to keep the audience on their side. Overall, they have a satisfying range of tricks in their repertoire, with the talents of each member showcased equally. The three main acrobats form an engaging trio with complementary skills and personas, while puppeteer David Splatt brings various side characters to life.

While the show is structured around a murder plot, the focus is not so much on keeping the audience guessing or maintaining any element of mystery, as it is on hitting familiar detective story beats: a visit from the dead man’s beautiful widow, interference from a bumbling policeman, a high-speed car chase, a confrontation with the culprit we suspected all along. Some of the slapstick-heavy filler sections between the more ambitious stunts grow a little tiring at times, but the show does manage a few welcome surprises too, including a burlesque segment and a delicious twist ending.

For the casual Fringe-goer, it’s an undeniably enjoyable way to get your hit of comedy, circus, burlesque, theatre, partial nudity, over-the-top characters, and high spirits, all in one 70-minute sitting. The performers look like they’re having fun, and easily achieve their aim of making sure the audience has fun too. If it’s light-hearted entertainment you’re after, The Détectives in Cirque Noir won’t disappoint.

Tickets: $30-40
The Détectives in Cirque Noir will be performed until 20 March 2022 as part of Adelaide Fringe