The Brothers are back and this time there's a mighty big screen highlighting their antics.
Christina Donoghue 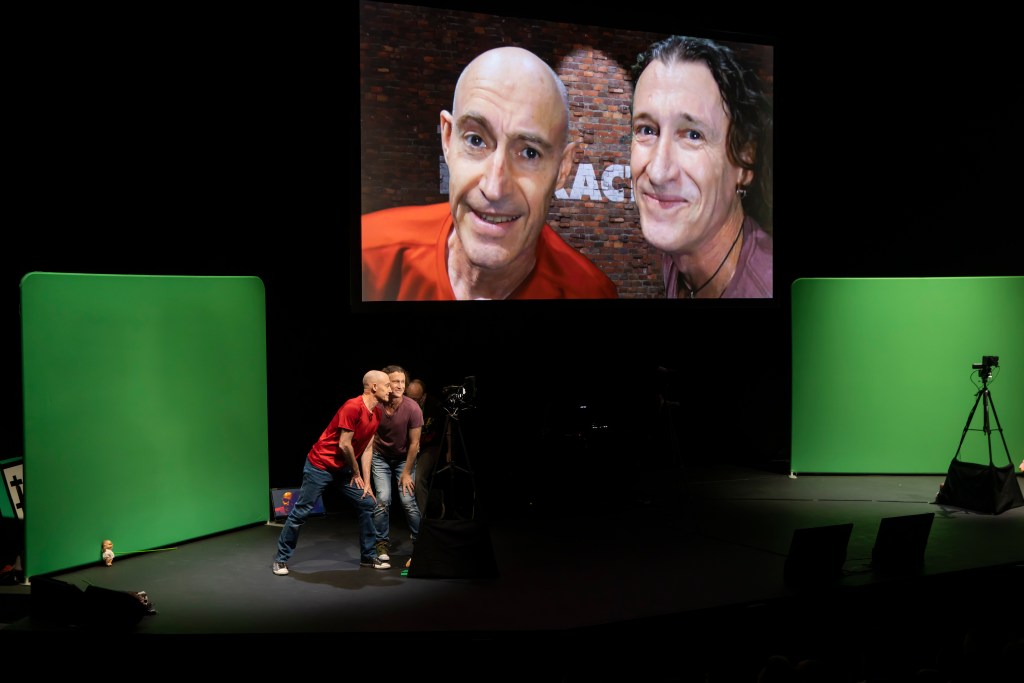 ‘The Distraction was a good humoured and genuinely funny evening which showed that childish play never loses its charm.’ Photo by Anna Kucera.

Watching three grown men play green screen for an hour and a half in theory sounds as entertaining as watching all the TikTok videos your kids have been saving up for you, back-to-back, for the same duration as two full-length feature films. But here we are, watching a green screen show, enjoying the riotous multi-layered comedy. The Umbilical Brothers’ show, The Distraction, winner of the Adelaide Fringe Festival’s Best Comedy 2021, has been brought to the Playhouse Theatre in Sydney Opera House.

The Distraction comprises two on-stage green screens, one very large digital screen, countless props, action figures on sticks, costume changes, disembodied baby dolls, several video cameras, and an array of new and confused characters. Rather than being a product of the energetic duo, this show is clearly the brainchild of a new and supercharged trio with the genius addition of co-creator and video technician extraordinaire Doug Bayne.

Bayne plays the editing suite on his laptop with the swag (and dance moves) of a cool, nerdy DJ at a music festival in London; he is the video magician who sews the whole series of CG worlds and Umbilical Bros action together live on stage in a pacey, comic, and imperfect symphony.

David Collins and Shane Dundas as comic duo The Umbilical Brothers became a national sensation when they appeared on Hey Hey It’s Saturday performing their irreverent combo of mime and orally-generated sound effects. From a crazy idea by two acting students on the stage of a national TV show, they have taken their act and run with it, and run, and run and 20 years later they are still running – literally. Now internationally celebrated, the physical brand of comedy that gave them a point of difference from other comic acts at the time has weathered well, and is still entertaining audiences new and old, which is easily verified by the number of families that brought all four generations of family to the theatre.

This particular Umbilical Brothers’ evolution has used our current addiction to screens, stuck out its tongue at our tiny hand-held screens, and challenged us to watch their really big screen. Not the two green screens to either side of the stage, just the really big digital screen in the middle, which of course is impossible and as impractical as the frantic changes and prop antics are impossible not to watch, although it presents a challenge in multitasking to audience members.

The Distraction was a good humoured and genuinely funny evening which showed that childish play never loses its charm. There were countless technical glitches, audience ‘volunteers’ who all revelled in their moment on the screen by upstaging the main act, and moments of spontaneity, confusion and uncontrolled laughter on stage. All of it added to the warm and casual experience that is an Umbilical Brothers show.

Although thematically The Distraction is timely and thoughtful in terms of the larger discussion around the attention economy and screen-time, what was most pronounced about the show was its unguarded joy, silly playfulness, and the chorus of gut laughs it generated from the audience.

The Distraction will be performed until 27 February 2022