Theatre review: Putting it Together

A joyous tribute to Sondheim’s memory via his 1992 musical revue.
Suzannah Conway 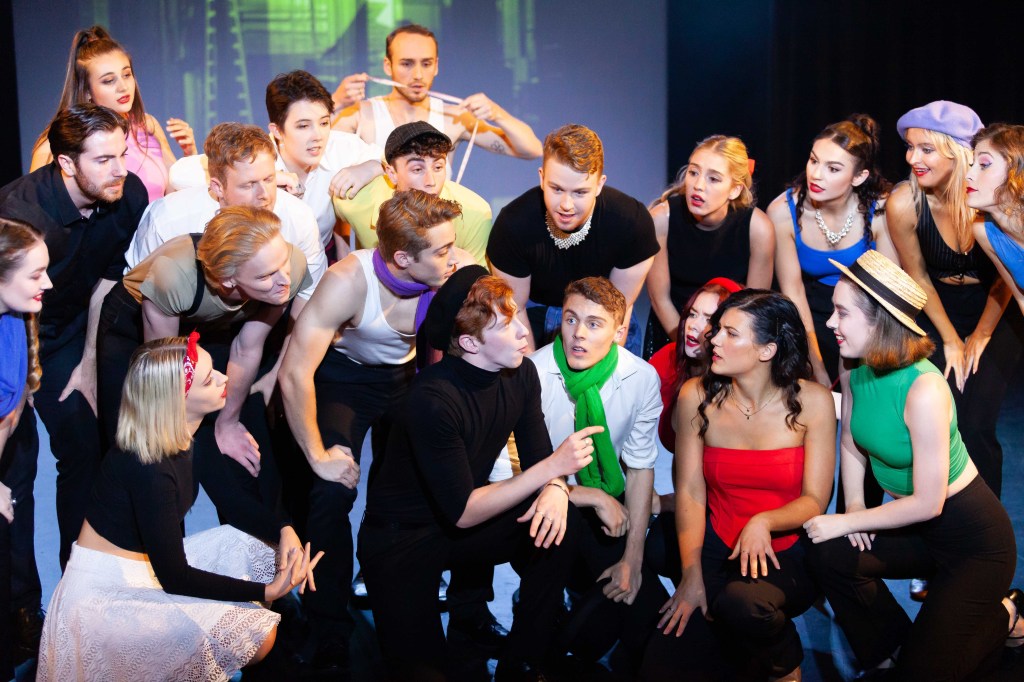 ‘While this was clearly a challenging work for the QCGU Musical Theatre students, they rose to the occasion very well.’ Photo supplied.

The celebrated composer and lyricist, Stephen Sondheim, passed away aged 91 in November last year. Lights on both Broadway and in the West End of London were dimmed, artists paid tribute to him in post-performance eulogies and he received ovations from all musical quarters. A giant of musical theatre from the 1950s through to his death, he was credited with revitalising the artform; a genius whose innovative approach to melding words and music created shows of extraordinary power and sensibility.

First staged in New York in 1992, Putting it Together is a compilation of songs created by Sondheim as a musical revue for five singers, including songs from Follies, Company, Into the Woods, A Little Night Music, A Funny Thing Happened on the Way to the Forum, Sweeney Todd, Assassins, Dick Tracy, Merrily we Roll Along and Sunday in the Park with George. Director Elise Greig has cleverly adapted the work to celebrate Sondheim’s life and work in order to suit an ensemble of 23 emerging performers from the musical theatre course at Queensland Conservatorium Griffith University, introducing the songs while threading a dramatic link between them.

Based on the conceit of a show within a show, the students ‘put together’ a production of Putting It Together, adding the allure that it will be seen by a Big Broadway producer. Questioning the content and interpretation of the songs and how to present them imaginatively was a nice touch – it is what one might expect from those studying musical theatre, especially those who were not even born when Sondheim wrote his most famous musicals.

This was a clever re-imagining of the revue and, for the most part, worked extremely well, demonstrating the talents of this highly-motivated group of young artists. They were assisted by excellent and clear direction from Greig, who coaxed strong dramatic performances from her cast, with each given a character in their own right. There was Jack (Jack Ingram) who was the director and instigator of the students’ production, anxious to get the piece ready but forced to listen to others’ ideas; Katie (Katie Loxston) ready to challenge Jack in her opening tribute to Sondheim with much support from others in the cast, and Captain Rohan (Rohan Treanor) who took on the task of creating and making a suitable tribute to the great man out of Lego pieces.

Greig also showed how powerful and skilled the students were in their ensemble work together, creating some terrific stage pictures across the many songs on a basically empty stage with piano. This was helped by a solid lighting design from Keith Clark. Atmospheric back projections, mostly with sepia photos and images of New York, set the scenes with some stunning costuming that included a wedding scene, glamorous evening and lunch parties, the Wolf and Little Red Riding Hood, a house scene with maid and servant, as well as a recreation of the Seurat painting from Sunday in the Park with George. All beautifully presented.

Where the students excelled within their triple-threat discipline of song, dance and acting was in the solo dance numbers and the many excellent ensemble choreographed songs. Choreographer John Clarke gave us a wonderful palette of dance numbers and created complex and powerful dance routines that were of an exceptionally high standard. The students responded enthusiastically and with great technical skill and attention to detail. Stand outs included the male chorus in ‘Lovely’ (A Funny Thing Happened on the Way to the Forum) and the female chorus from ‘Every Day a Little Death’ (A Little Night Music) while big ensemble numbers such as ‘Rich and Happy’ (Merrily we Roll Along), ‘Back in Business’ (Dick Tracy) and the finale ‘Being Alive’ (Company) were first rate.

Sondheim’s lyrical language includes a patter song technique that often requires amazingly fast individual singing, as well as dexterity with the stichomythic lines (lines alternating between singers). This is difficult enough for professional artists but for emerging artists, it is certainly a huge ask. In the circumstances, the class of 23 did extremely well, rising to the challenge with a fortitude and bravado that was well appreciated by the audience. They worked extremely hard to overcome any vocal weaknesses but some songs were just too challenging, both technically and in terms of understanding the double-entendre concepts. The latter included the sarcastic wit of Sondheim in ‘Could I leave You?’ (Follies) and the delicious, dark humour of ‘Hello, Little Girl’ (Into the Woods).

However, all credit to Tiffany Payne for her raunchy attempt at the celebrated ‘Sooner or Later’ (Dick Tracy), Jacqui Dwyer and Audrey Rose for a splendid rendition of ‘Country House’ (Follies) and Jacqui Dwyer’s punchy ‘Ladies that Lunch’ and Audrey Rose’s poignant ‘Marry Me a Little’ (Company). And Brooke Szych made an impressive stab at the all-too-fast lyrics in the delightful ‘Not Getting Married’ (Company) ably supported by Gabriel Tiller and Genevieve Dawkins.

Musical Director Heidi Loveland, who also played piano on the show, kept a tight rein on proceedings, ably supporting the students throughout the performance.

While this was clearly a challenging work for the QCGU Musical Theatre students, they rose to the occasion very well, were completely focused, and gave of their best to produce a joyous and fun show celebrating Sondheim’s life. This will have been a terrific learning experience for them all.