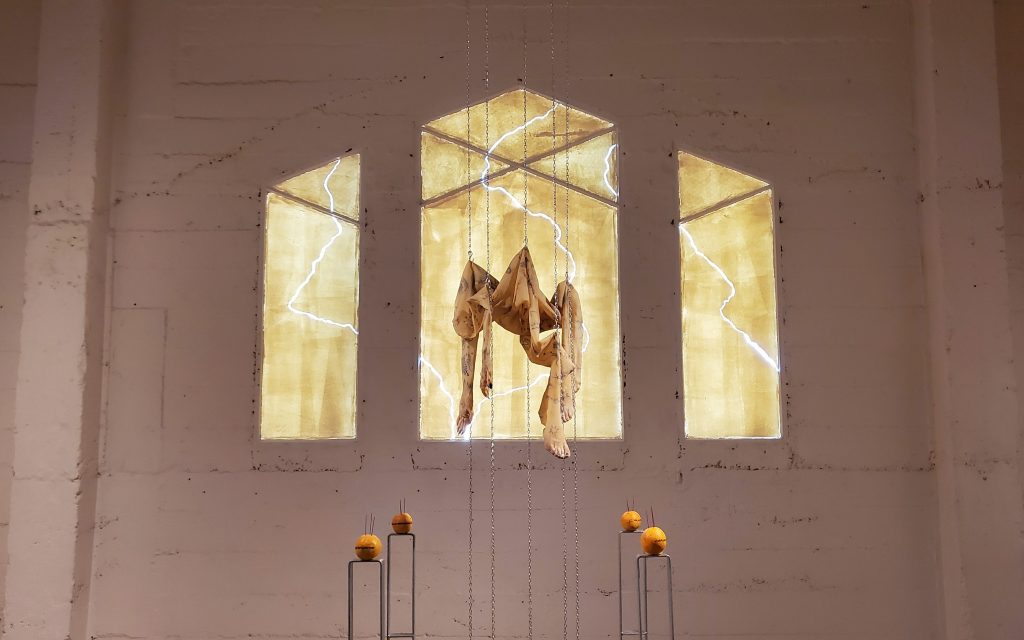 Em Finucane, The Body as a Space we Inhabit, 2019, installation view at Incinerator Gallery. Photo: ArtsHub.

Aeon Resurrection begins the moment you ascend the stairs at Incinerator Gallery. One can almost imagine having a game console in hand, carefully guiding the avatar towards what looks like a post-apocalyptic wasteland, brought back to life with the infinite run of cracked display screens and the low hum of unattended motors.

But the show is louder than a few chirping crickets. From Justin Shoulder’s hypnotic AEON†: EP1 (2020) to the mind-bending video (2022) by Huntrezz Janos, vibrating audio tracks set the tempo for the exhibition – one which sends the senses tingling from the moment you step in.

Winding through barricades, discarded bricks and steel fence panels, Em Finucane’s The Body as a Space we Inhabit (2019) hangs from the ceiling like a cult sacrifice.

But rather than bone-chilling, the ballpoint doodled skin suit with ultramarine nails is more like a costume of identity than the death of a body, signalling the fluidity of our shifting personas.

Beneath it, sticks of incense stand like antennas communicating to an interrestrial world, with etchings on plump oranges that softly echo ‘please listen to me’ and ‘tell the spirits’. These are phrases drawn from the artist’s mother’s instructions on Cantonese rituals that should be performed before moving into a house.

Nicholas Aloisio-Shearer’s tapestries from the series Reject Modernity, Embrace Tradition (an online catchphrase encapsulating a blend of mockery and nostalgia) manipulates imagery of the Western art historical canon with ‘regressive, online cultures’. Such examples include a sinister goblin gazing below on the exhibition space, red-eyed frogs and most notably (cringers beware) a dick dinosaur, expertly mounted on top of two protruding bronze tongues.

This interstellar battle between traditions and modernity, the digital and physical space (and selves) persist throughout Aeon Resurrection.

Huntrezz Janos’ video and face filters (both 2022) transverse between augmented and physical realities. The projected installation provides a portal into the possibilities of re-worlding, drawing upon the artist’s interest in activism and ludology – the study of video games and its potential to dismantle status quo.

Further exploring foreignness through cultural iconography, Diego Ramírez’s neon lair considers how vampires signal the ‘other’ and ties into ‘the Catholic psyche that colonises Mexico’.

The poetics of titles such as i want 2 die in Mexican soil, so please don’t kill me yet (2022) and when you arrive i am the dog that loves a cat (2022) ties in with a sense of longing for the motherland but also the fear and anxiety of being perceived as foreign.

Aeon Resurrection is a show that embodies the collective psyche of participating artists, each offering something of their own towards this infinite rebirth of cultures, identities and spatial dimensions.