Based on the Hitchcock film, this seamless production really wants you to enjoy yourself.
Ned Hirst 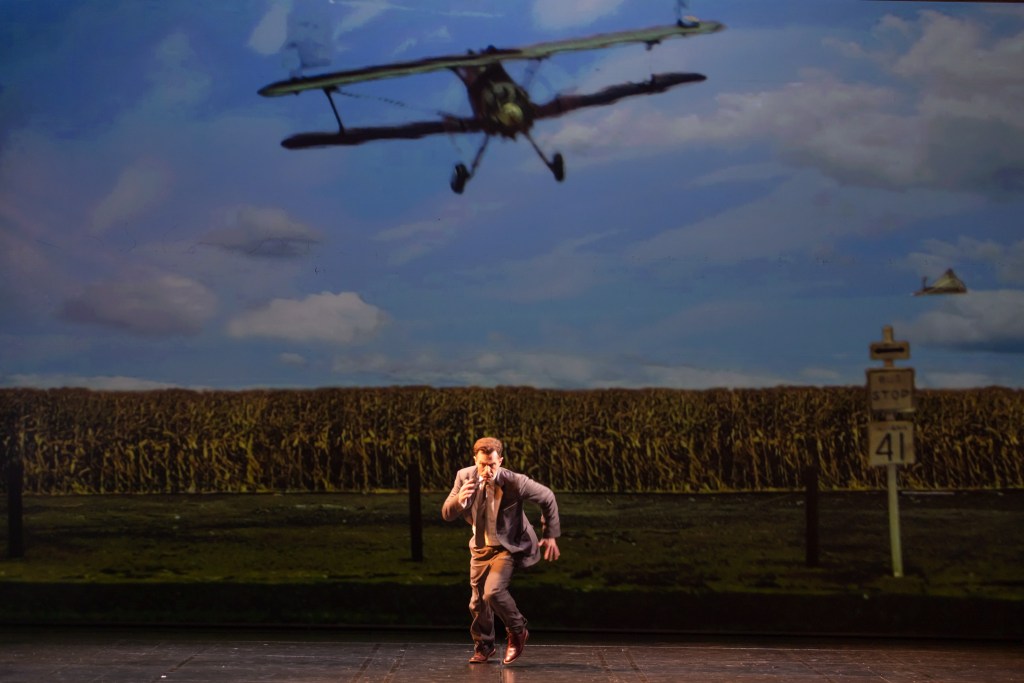 A scene from the 2022 Sydney production of North by Northwest. Photo: Daniel Boud.

The opening scenes of North By Northwest, based (of course) on the classic Hitchcock film, plunge the audience straight into the midst of Cold War intrigue. It is 1958 in New York City and we are on the way to the theatre when suddenly our protagonist, advertising man Roger O. Thornhill, finds himself abducted, then framed for a serious crime, then on the run to Chicago.

The story moves at breakneck speed and, in case you haven’t seen the film, I won’t spoil anything here except to say that the film features famously large set pieces involving a crop-dusting aeroplane and Mount Rushmore (not, I hasten to add, at the same time).

In that respect, it is a difficult film to adapt for the stage, but Carolyn Burns has done a great job. The production wants you to be in on the joke of just how ambitious a project it is and plays its clever use of cameras and bluescreen for laughs.

The fact that it does so with seamless ease does not distract from the fact that the production looks fantastic. The set is simple, but the few moving pieces are slick, polished, and perfectly complement the (equally slick) story.

The cast are uniformly terrific. David Campbell as Thornhill is a magnetic presence, which is just as well because he is on stage almost constantly throughout. His accent is very impressive (think John Mulaney with some posher vowels, perhaps a touch of trans-Atlantic era Katherine Hepburn) as are the accents of the entire cast.

Amber McMahon is the perfect Hitchockian femme fatale in her role as Eve Kendall, and the ensemble cast play multiple parts with aplomb. Fans of The Games and Newstopia (such as myself) will particularly enjoy Nicholas Bell’s cameo as George Washington’s face as it appears carved into Mount Rushmore.

Director Simon Phillips has done an excellent job in balancing the suspense and comedy of this adaptation.  The humour never detracts from the genuine thrills of the story, and equally the jokes stop you from feeling that it is ever taking itself too seriously; the play just wants you to enjoy yourself. And it is hard not to.