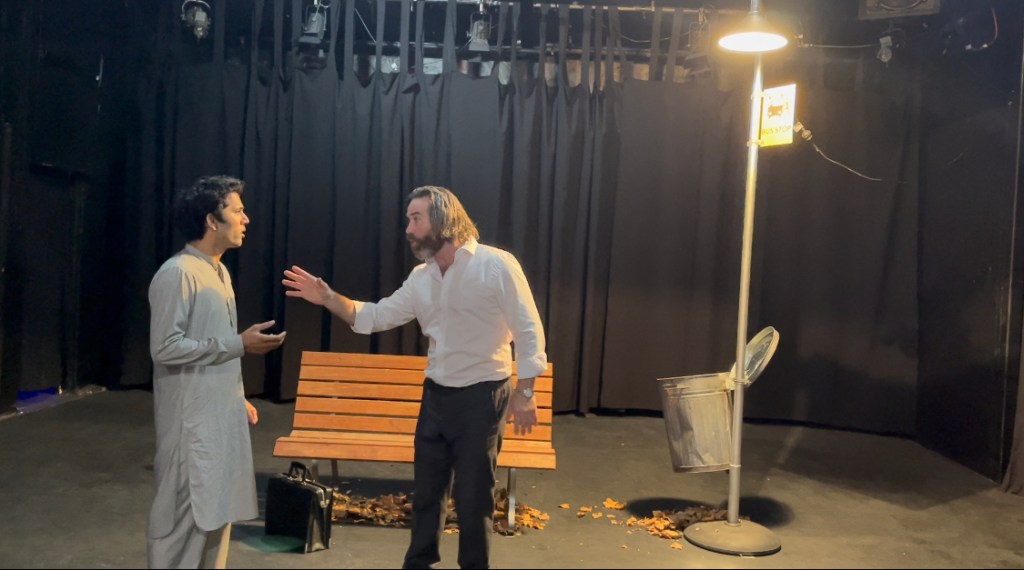 The play ‘holds a stark mirror to the racism that pervades our culture.’ Photo supplied.

It could be set today. Two figures meet at a bus stop late at night: Norm, a belligerently jovial middle-aged white man, and Ahmed, a Pakistani student, cautious and intelligent. Norm, as he confesses, is lonely and wants to chat – to build a bond of ‘understanding’ and ‘friendship’.

After Norm claims that Ahmed has offended him by attempting to walk away, Ahmed reluctantly agrees to stay and answer a few questions and is soon trapped in an interaction that fills everyone watching with an increasing sense of dread.

Still disturbingly recognisable and relevant, Norm & Ahmed was written in 1968, when the country was in the middle of dismantling its White Australia policy. Now a classic of Australian theatre, it launched playwright Alex Buzo as a pioneer of New Wave drama (and sparked controversy when its famously shocking ending landed several actors in court for use of obscenity).

Joh Hartog’s latest production, starring Brendan Cooney and CeeJay Singh, is a welcome opportunity to revisit a significant piece of history that still has the power to challenge us today.

Hartog has retained the original 1960s setting (including references to Norm’s past as a WWII veteran), which allows us to understand the play in the context of its political moment. The costume and set design, however, has been kept largely neutral and non-specific, reminding us of the timelessness of the play’s themes.

In his plain white shirt and trousers, Cooney’s Norm, though a little rumpled, does not present as being particularly dangerous or cunning. It’s a choice that complements Buzo’s conception of Norm as something of an Australian everyman – fanatical about sport, enjoys a Sunday roast and pottering in his garden – and makes the revelation of the depths of his wretchedness and prejudice all the more confronting.

Singh’s Ahmed is youthful and eager to please; we feel his vulnerability from the moment he steps into the scene. Together they make for an engaging duo, jointly drawing out the tension until it snaps in a startling conclusion.

Norm & Ahmed is viscerally uncomfortable to watch. It holds a stark mirror to the racism that pervades our culture, but also more generally to the ways our society fosters disenfranchisement and inequality. Norm, for all his defensiveness and insistence on the superiority of the Australian way of life, is filled with anger at his own situation: haunted by war, lacking a strong community, working a low-wage job, and stuck on the wrong side of an insurmountable class divide.

Norm & Ahmed provides a shock to the system, dragging back into the spotlight things we prefer to keep hidden away.