An inspirational and heartfelt story about a life-changing journey told through the medium of comedy.
Suzannah Conway 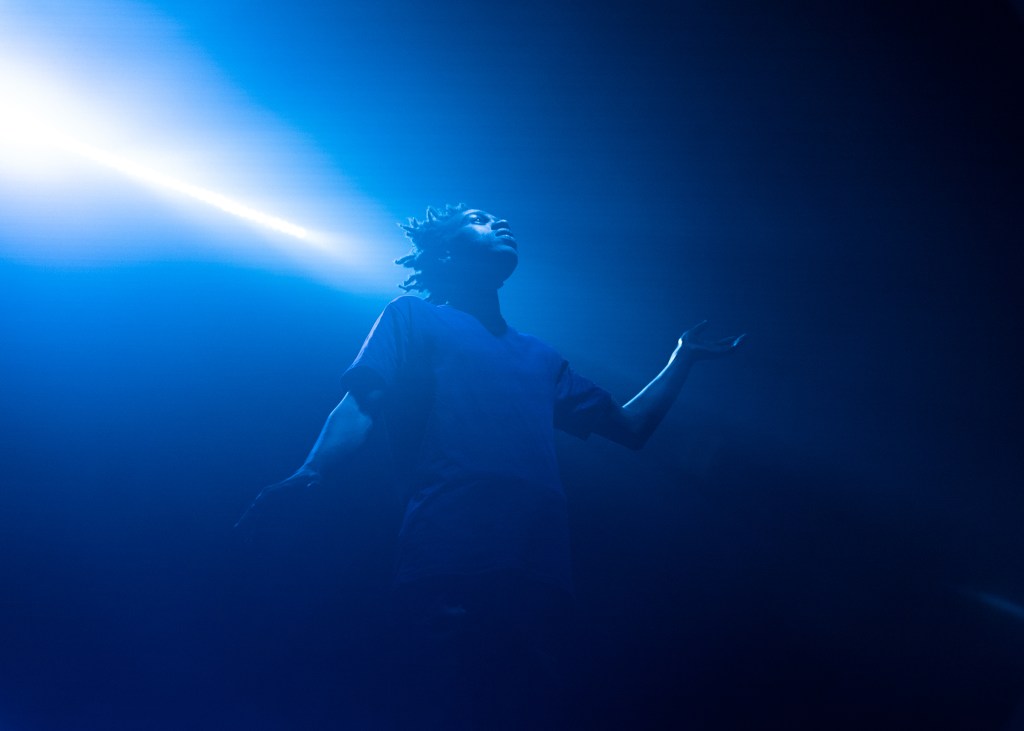 Oliver Twist ‘certainly has all the makings of a fine comedian and actor if Jali is indicative of his art.’ Photo by Tom Gilligan.

‘Jali’ is a West African noun for an historian, storyteller, praise singer, poet or musician, an all-encompassing word that aptly describes the role that actor and comedian, Oliver Twist, inhabits in this most enjoyable and infectious one-act play. We learn early on that Oliver is his first name but that he changed his African surname to Twist on arrival in Australia, a somewhat tongue-in-cheek response to the Dickens’ character, but which seems to have helped define him as a comedian.

As the humour unfolds in JALI, he seems often to be driven by a bizarre sense of perversity, portraying elements of his life in a most entertaining way, despite its obvious horrors. A charismatic performer, he brings his turbulent yet captivating life-story vividly to life in this 60-minute monologue, where a glorious mix of both tragedy and comedy make it both heartfelt and real.

Twist came to Australia with his family as part of a refugee intake, arriving in Ipswich in 2014. But his journey started long before that when he was just 4 years of age. As his father was a Hutu and his mother a Tutsi, the family had no choice but to leave Rwanda following the 1994 genocide. They left with nothing on a long and arduous bus ride.

Twist spent most of his early childhood in Malawi, initially living in a refugee camp and then later in the city, where his parents owned and ran a small store. Not feeling safe in their new homeland when riots broke out, the family tried unsuccessfully to move to Canada but eventually resettled in Australia. Here at 18 years of age, Twist was able to find his voice as a storyteller, exploring his past through a series of anecdotes and his own particular brand of humour.

JALI was first presented in 2021 as part of the Griffith Lookout program, established to support some of Sydney’s most promising independent theatre artists. Twist wrote and directed it, as well as being the sole performer, but has made some changes for this revival.

Morgan Moroney has created a new set design with a series of platforms and steps that are used interchangeably, as well as a central step down to below stage level representing a Rwandan lake, perhaps Twist’s spiritual home, to which the character returns at several junctions during the play. Moroney has also lit the production, creating an atmospheric mood of mostly shadows, lighting Twist in spotlights on the various platforms.

There are wonderful red earthy colours in the Rwandan and African scenes that change to blue-tinges in the refugee camp and beyond. Daniel Denholm has composed a new score with some impressive modern African music that is utilised effectively in the blackouts between scenes. He has also recorded various soundscapes including lapping water, dance music and rifle noises to assist the mood.

There are no props and no costume changes and the production flows effortlessly with Twist at the centre, telling his story through a number of short scenes portraying the various periods of his life.

The play is not chronological but jumps around a lot to different periods, keeping the audience’s interest while also offering a nice rhythm between the tragic elements of his life, alongside humorous interludes with sharp, witty comments. The latter includes looking after his father’s shop in Malawi, with a vivid picture painted of the child doing homework at the counter while also selling phone credit.

Twist also asks indignantly why he was never chosen as Judas for the school nativity play.  And when the family is finally about to leave to come to Australia, there is the absurdity of his mother questioning whether she should give up her special tubes of hair colour at customs in exchange for taking a flight to freedom. Such moments are widely scattered throughout the work, bringing relief to the serious issues of sheltering from gunfire or having rifles pointed at you in the middle of the night.

It is the humour underlying these serious events that really makes this play work so well, with its clever script that never over-explains, but rather is understated while at the same time remaining easy for the audience to link the dots.

Twist does not do all the work for us and the play is better for it.  A perfect balance is achieved through his shining personality and wonderful self-deprecating humour, which never becomes maudlin or indulgent. He is also a master of lovely descriptive passages particularly of Rwanda, the symbolic lake and its ethereal spiritual qualities, alongside a section where he picks mulberries, and the family’s wonderful if simple Christmas together in Malawi, before the frightening riots.

The passage where the family lies on the floor holding hands for hours while his father waits by the door with a machete, is all too frighteningly real.

Additionally, what we glean strongly is Twist’s commitment and love of family that has bound them all so strongly together through adversity, and also his disappointment when he encounters feelings of racism and not being welcomed. This comes through in the family’s rejection by Canadian immigration, an encounter late at night in a Sydney alley and especially on his first day in Australia, in Ipswich, when he goes for a walk in broad daylight and is targeted as a threat.

This is a remarkable, heart-breaking story that is well-crafted and sensitively performed by Oliver Twist, who is an excellent storyteller. Most of us can only attempt to imagine what he has encountered and lived through. The horrors must have been all too real for a young child, but Twist has managed to rise above his traumas and interpret them in a way that a modern Australian audience can relate to. He certainly has all the makings of a fine comedian and actor if JALI is indicative of his art.