A truly exceptional production that is winsome, lyrical and at times even transcendent.
Suzie Gibson 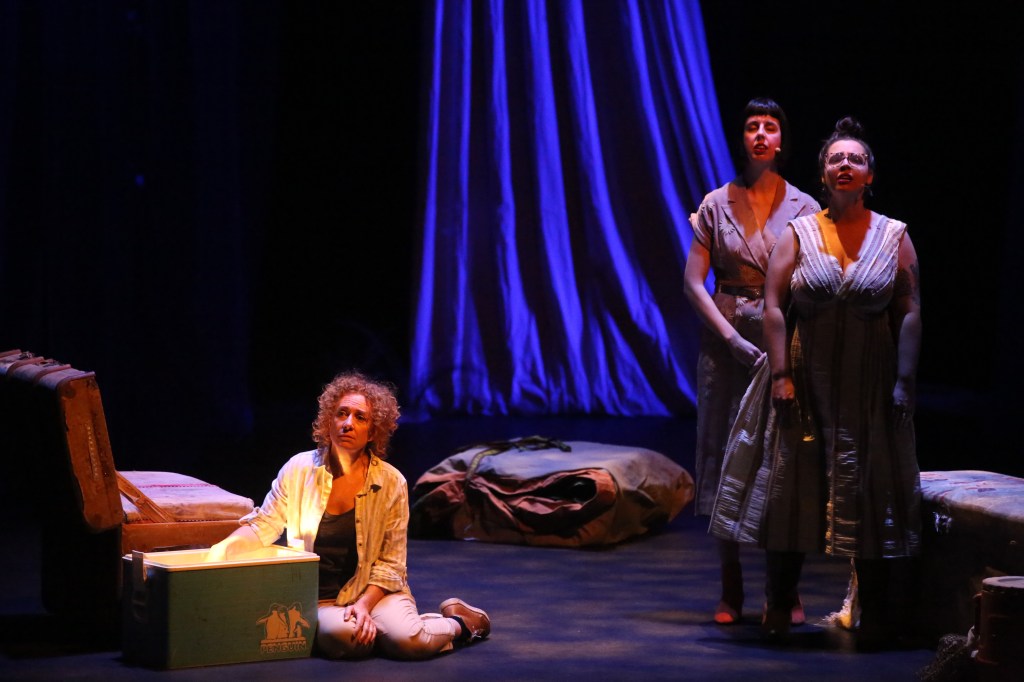 This team of regional creatives are independently accomplished artists whose skills have been harnessed by the Lingua Franca theatrical company as well as Bathurst’s Local Stages. The result of this collaborationhas resulted in a production that is winsome, lyrical and at times even transcendent.

Much of this can be attributed to the resplendent sounds of Abby Smith and Sophie Jones’s musical accompaniment. Smith and Jones’s harmonies provide acoustic beauty and soulful asides that give this production a great deal of heart. The concept of a heart, or of losing one’s heart, is central to this drama as this thematic oscillates around the very nature of our existence, especially if it is bereft of heart.

The moody atmosphere of director Deusien’s production is quickly established; audiences are immediately spellbound by a semi-darkened stage from which the spectral voices of Smith and Jones emanate, an otherworldly choir ushering us into a sphere that is gritty and harsh.

As the warm lighting illuminates the opening scene we are introduced to the petite figure of actor Kate Smith. However, Smith’s delicate physicality is starkly contrasted by her powerful command of language as she informs her audience that she has lost her heart and thus must journey across Australia in search of it. Such a beginning asks audiences to accept the impossible for how can one literally live, let alone travel, without a heart?

The magic realism of this play’s premise is counterbalanced by a set design that is very much anchored in reality. The stage is sparse and yet every object is meaningful – an antique suitcase, an old esky, fragments of sun-bleached grass and an animal’s skull. These things conjure Australia’s unforgiving landscape and climate, evoking the looming threat of global warming.

The pared back set design is matched by the simplicity of Smith’s costuming that includes a basic singlet, earth-toned trousers, a checked shirt, and desert boots. The heroine of this narrative is no glamorous coquette, femme fatale or innocent gamine, rather a no-nonsense, self-possessed woman who is prepared to do almost anything to restore her missing heart.

This notion of a lost heart that leads to a physical and psychological odyssey is evocative of many powerful literary narratives, most of which have been male-centric. For instance, Joseph Conrad’s famed Heart of Darkness dramatises Captain Charles Marlow’s physical and imaginative exploration of a wilderness, while Kenneth Cook’s equally astonishing novel Wake in Fright (successfully adapted into the 1971 film of the same name) depicts another sojourning male character who is traumatised by the supposed dead heart of a nation (this time, Australia’s outback). Unlike so many narratives that centralise such male protagonists, Highway of Lost Hearts places a woman at the centre of its story and in so doing provides a fresh perspective upon the experience of travel both as a physical and psychological phenomenon.

But there is not just one lost heart in this play, there are many. These include the past and continuing disenfranchisement of Australia’s First Peoples, refugees, migrants and other marginalised groups and individuals, such as the anonymous poverty-stricken who reside in far-flung townships or in the cities’ dead centres. There is thus a palpable social conscience that underpins this drama, with Kate Smith’s epic monologue doing justice to these important issues. Moreover, Smith’s unique ability to conjure the invisible, to inhabit various mind-states, and to recount adventures that are at times extremely funny and disarming. The protagonist’s heart might be lost but it is not broken.

The grief, loss and humour of this play is transformed into a memorable and resplendent experience that is achieved through the relationship between monologist Smith and two female musicians, who in unison bring an enchanting dimension to a narrative that makes one ponder matters of the heart that go beyond the world of the play.

This outstanding production is not to be missed.