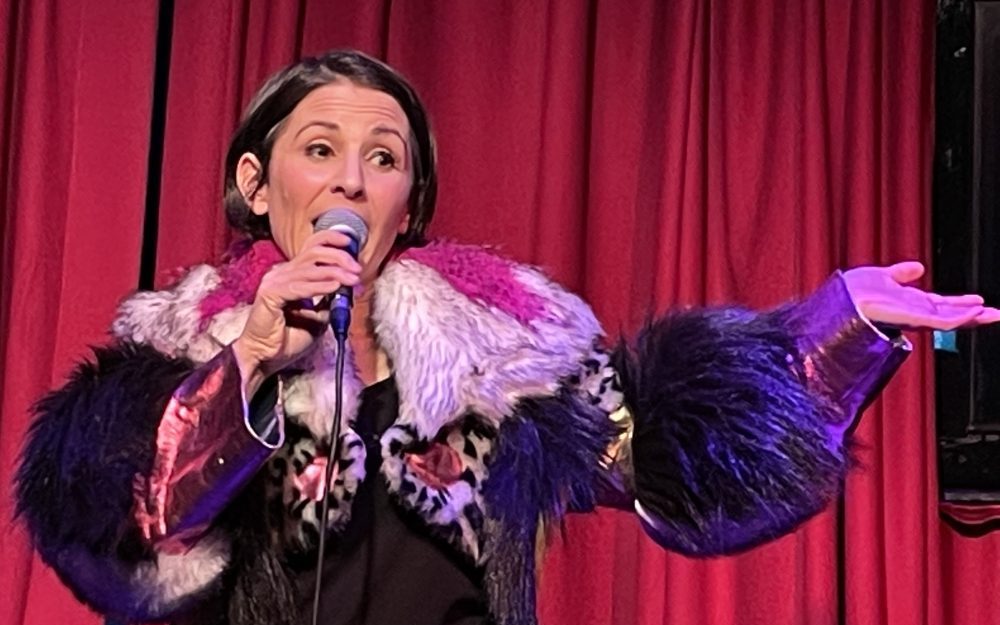 Best regales the audience with ‘many trashy stories from her hedonistic youth.’ Photo by Neil Lorimer.

Lucy Best’s one woman show, Disgraceful, is a prototype for over-sharing. It is a charming comedic autobiography about going too far, with too much sex, too much swearing and way too many drugs. In fact, it was hard to keep track of how many times the words ‘sex’ and ‘drugs’ were uttered.

The Melbourne-based British writer, producer and performer’s show was cancelled in 2021 due to the pandemic but it is back, and Best says she has since developed it further.

The Butterfly Club is a fitting venue: dark, a little bit quirky, a little bit dingy. In fact, it could easily be imagined as one of the locations for one of Best’s many trashy stories from her hedonistic youth.

Nirvana’s Smells Like Teen Spirit pumps from the speakers as the audience takes their seats. Best bursts onto stage wearing classic 90’s gear – black jeans, flannelette shirt, and Converse – and proceeds to mosh around the tiny stage.

The guitar and drums subside, and colourful lights appear and dart across Best’s face. She stares in wonder at her own hands, and gazes off into the middle distance. She is tripping on acid. The audience is jerked out of this memory as Best introduces the show, and promptly explains that she is not actually tripping on acid. Audience participation is established upfront with everyone invited to yell out ‘disgraceful’ whenever the ominous voice of Best’s mother appears to override one of her many tales of living life to its fullest.

Best weaves together a narrative of her life with anecdotes of her childhood in London to her current life as a mum of teenagers in Melbourne. All the stories are underwritten by the theme of being disgraceful, whether being rude to nice elderly people as a child, getting expelled from a posh English boarding school as a teenager, or taking drugs as an adult while her own children were away with their father. There were a few minor timing and delivery imperfections that could be put down to opening night glitches.

At numerous times during the hour-long performance, she contemplates: ‘do I have my shit together? ‘But beneath these stories of debauchery there is another narrative, that of a young woman trying to fit in and find her place in the world. There is a vulnerability and self-consciousness in Best’s storytelling that is both relatable and admirable. Further to this, she talks freely of her own mental health struggles which have caused self-doubt and harsh self-judgement. She incorporates the conflicting elements of her being with warmness, grace and sharp humour.

The show finishes off with a bang. Best busts out a classic show tune style song about her embracing her past and all of herself – the good and the bad –  ‘I turned out alright.’ She dons an over-the-top faux fur coat too, which she says her mother would loathe, in perhaps a bit of an up-yours to all the voices that told her she was too much. She did indeed, turn out alright.

Disgraceful will be performed until 4 June 2022