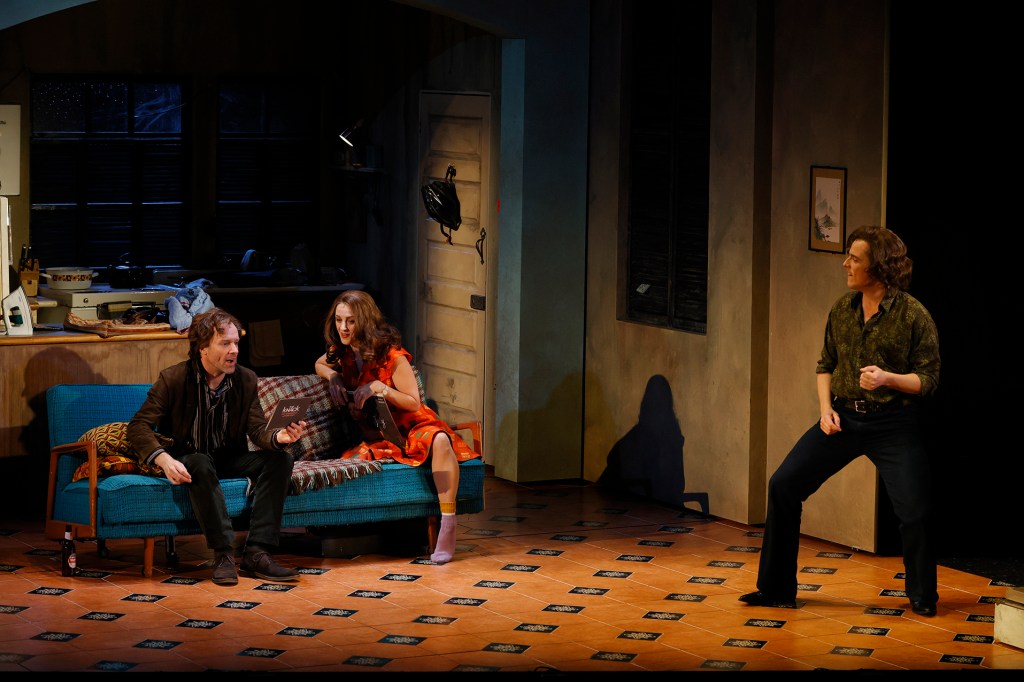 ‘Once you accept the story you’re dealing with isn’t about love or revenge or tragedy or drama but it is, in fact, just about jazz … there is a lot to enjoy.’ Photo: Jeff Busby.

It’s wonderful to live in a city with a theatre company still developing new work, in the post-COVID downturn that is seeing theatrical communities in smaller cities restage old works or court full houses with sure fire crowd pleasers.

To stage new work post-COVID is a risk, although the MTC have taken that risk based on some safe assumptions. Firstly, Come Rain Or Come Shine is an adaptation of a successful short story, based on an unforgettable jazz standard of the same name. Secondly, it’s been brought to us from three of the most experienced hit-makers in contemporary theatre: acclaimed librettist Carolyn Burns, MTC directorial staple Simon Phillips, and former Split Enz member Tim Finn – the team that won a Helpmann for their adaptation of Ladies In Black.

This show, their most recent work, fails to replicate the success of that earlier sibling. But it does raise some interesting questions about why there might be more reasons to create a work of live performance than simply pleasing critics whose expectations are perhaps the least flexible of any audience members.

The play itself follows three characters from uni days to the present. One is an impoverished teacher and the other two work for big corporations. When the teacher comes to stay with the bankers, it’s an occasion for deep farce: the teacher must look as bad as possible, so that the banker might look good and save his marriage. In order to look as pathetic as possible, the banker has one request of his teacher friend: don’t talk about music.

It’s a good farce even if it doesn’t always hit all the right notes. The story behind MTC’s Come Rain Or Come Shine is even more interesting, and has occasioned some great narrative journalism from Michael Dwyer at The Age.

It starts with a short story by the Nobel Prize winner Kazuo Ishiguro, about three university friends who are bound together. But it’s a classic triangle in the sense that both of the men, Ray and Charlie, love Emily but only Ray and Emily share a passion for jazz.

Basing a story on a shared love or fandom is an astute basis for a commercial adaptation, and it’s perhaps for this reason that MGM had already tied up the rights to Ishiguro’s short story. In a thrilling David and Goliath twist, when Burns, Philips and Finn wrote to Ishiguro with the anecdote that the three of them are similar to the play’s own three protagonists, and would like to adapt the story into a musical, their plea worked. They got the rights to adapt the story.

Come Rain Or Come Shine is not a great musical. There are grace notes – of unrequited love, and lay philosophy of modern life – that never develop into fully-realised themes. Reviewing is basically a narrative form and the most apparent element of the performance for us – the story – is the production’s biggest flaw.

It’s a essentially a tale about three friends who share something in common, trying to stay true to that thing despite obstacles, even when their obstacles are their own character flaws. The trio are no longer as close as they once were, now that their careers have driven them apart and their love of – or contempt for – jazz is what keeps them together. The show is a satire on the notion of middle class success. The story’s two main characters are high-fliers while the butt of their jokes is an impoverished teacher. This conceit feels like a pre-Brexit plot and may be a casualty of working from adapted material that’s a bit behind the times.

Once you accept the story you’re dealing with isn’t about love or revenge or tragedy or drama but it is, in fact, just about jazz (plus a bit with a dog) there is a lot to enjoy – and it’s not even all about jazz. Dale Ferguson’s set enables all the misdirection and playfulness communicated by the score. Sophie Woodward has produced beautiful but understated costumes, including an outfit that transitions from the kind of full skirt that’s most effective when dancing to a pencil skirt – which may be one of the most eloquent things a costume can say about the passage of the years.

And while the music itself isn’t Sondheim, it’s worth remembering that even Sondheim wasn’t always Sondheim: I vividly remember sitting trapped in a performance of Passions that I remember feeling mired me in intolerable story and would never let me go. At least in Come Rain or Come Shine the music is very good, an adequate complement to a farcical story that aims only to please.

If you love the Great American Songbook, you will be dazzled by a medley the script calls ‘tennis elbow foot.’ If you don’t love jazz, it’s still a very enjoyable evening at the theatre. Provided you don’t want anything from the theatre but to see a play that is what it is and has a great origin story.