A comedy of manners about race and higher education.
Vanessa Francesca 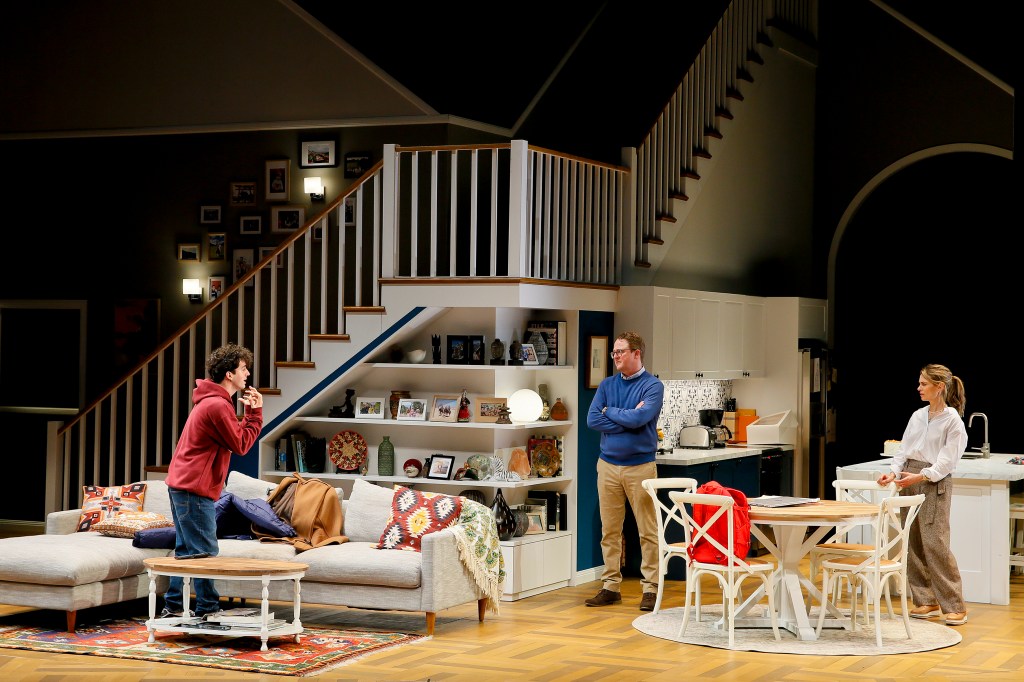 For those of us who remember spending lockdowns glued to the news while America’s fraught history of race wrote itself out in one more urgent chapter, it’s pleasurable to note the MTC’s latest production is an American family drama about race. Admissions features strong performances by Kat Stewart as Sherri Rosen-Mason, the admissions maven of an elite and elitist New England prep school that is now, by force of her will, only 80% white. The story is a follow up to Joshua Harmon’s breakout success, Bad Jews, and both Melbourne productions of these plays were directed by South African directorial sensation Gary Abrahams.

It’s an unusually resonant story, with echoes of the American college admissions scandal as well as the George Floyd moment. Rosen-Mason is the kind of parent you can imagine picketing that #BlackLivesMatter. You can also imagine her frantically bribing an outside admissions consultant to lie about the uniqueness of her kid. And it’s to this story’s advantage that the audience gets to watch her do variations of both these things. To explain how this play manages to have it both ways, to occupy the moral high ground to the exclusion of others more deserving, and to show the shameless cynicism, competition and manipulation inherent in maintaining the competitive advantage in a capitalist society, you only need to understand one thing: It’s a play about white people and what these white people think their children deserve.

But it’s worth taking a step back and looking at the play’s whole narrative to figure out why a compelling premise, compelling performances, and a script so sure of itself you expect to hear it’s bribed an admissions officer at Yale, is less than the sum of its parts.

The catalytic event for the play is when Rosen-Mason’s son, William McKenna (an actor fresh from his role in Harry Potter and The Cursed Child) comes home from school to reveal that his best friend, an African-American, got into Yale, while he did not. For those of us who have a career path in mind, not being able to take that first step on the journey can feel like heartbreak. It is to Harmon’s comic advantage that he turns a moment of personal introspection into the linchpin monologue of a comedy of manners about race. But is everybody laughing?

As McKenna’s character spouts that he might get so stressed out working out why Spanish actors like Penelope Cruz are people of colour but Italian actors like Sophia Loren aren’t, the audience laughs and claps so much you might think it escaped their notice that both actresses were so amazingly privileged as to render any discussion of relative victimhood moot. By the time the monologue reaches its climax and its Jewish protagonist laments that he might just burst out in a big ol’ ‘Seig Heil!’ It suddenly doesn’t seem that funny. Mainly because everybody who’s laughing is, well, very white.

The lack of diversity of an MTC audience on opening night isn’t necessarily the fault of the theatre company. But it does raise questions about the authorial decisions of a play whose two most compelling black characters only ever appear in reportage. As Rosen-Mason experiences tension in a friendship because her white husband has a better job than an equally qualified black one, we think: well how do we know? And as the husband, ably played by Simon Maiden, upbraids his son for dashing his parents’ hopes for his future, and reveals himself to be a bore and a shit, it’s hard not to ask: for how much longer will the human race be more interested in stories about white people being bores and shits than people of colour making the most out of the meagre opportunities being offered to them?

Which is not to say that Admissions doesn’t deliver the goods in terms of perfect timing, profound irony, and biting satire. It does do that. But the effect is primarily to reassure the audience about their existing pieties, not to forge new ones. Is it reasonable to ask a play to be a blueprint for how to change the world? Maybe, maybe not. But that is exactly what criticism asks of art, for art to provide whatever answer feels the most authentic.

Admissions is a punchy, thought-provoking play that puts the spotlight on its audience to ask how the examined life can be more like the one we claim to idealise.

Admissions will be performed until 9 April 2022