A breezy opera that spirals into romantic tragedy, Werther is one of opera's most performed productions and it returns to Sydney with international talent.
Gina Fairley 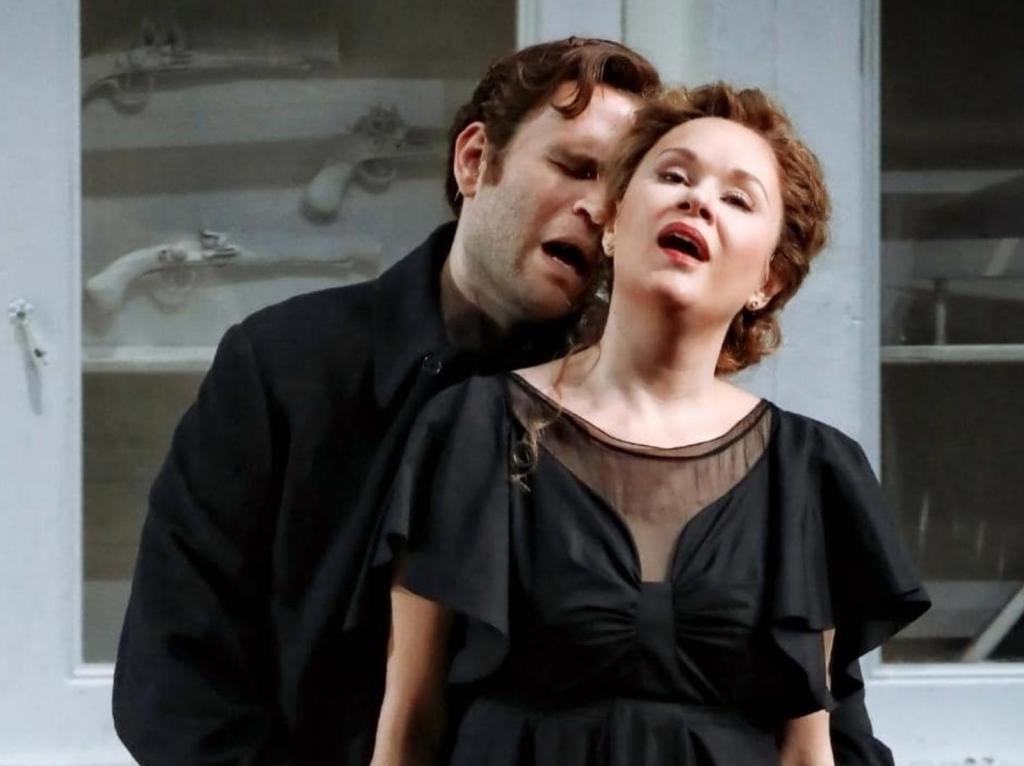 There is a sunny, breezy quality to Act I of Massenet’s Werther that makes this opera well placed for the summer repertoire. The curtain raises to an inner courtyard where a family lunches and lingers, carefree and careless of the passing of time.

It has a contemporary feel and the music is incredibly beautiful – as is the simplicity of Michael Yeargan’s sets, which use transparent scrims to view wheat fields beyond and the nightly parade of couples – a passagiata of carefree strolling on a summer evening. It has an elegant modern look and feel which is continued through this Opera’s four Acts.

However, like all good romantic tragedies, such pastoral ideal spiral into devastation in Act III and Act IV as the lives of the main characters are shattered: a love-sick Werther takes his own life as the subject of his affections, Charlotte, is betrothed to, and then marries, another man.

Based on Goethe’s popular novel, The Sorrows of Young Werther (1740), Massenet worked on this opera for two years. Notes on the opera state that the novel was ‘so popular in its day that men began wearing the poet’s signature outfit of yellow pants [and] bright blue coat’ and is said to have to ‘spawned a generation of “sensitive new aged guys”’.

The Sorrows of Young Werther attempted to be “contemporary”, with a radical reassigning of masculine emotion. Viewing the opera today, it comes across as anything but contemporary in its emotional complexity.

Werther as a poetic dreamer is a little hard to relate to in our aggressive, fast-past 2019, as is Charlotte’s selfless sacrifice and sense of duty about marrying Albert (her mother’s request on her deathbed), in times when women are celebrated for their independence.

However, in a desire to keep it current, director Elijah Moshinsky – whose 1989 production is re-staged here 20 years on – stipulated that each time his production was performed the costume consultant was to source contemporary fashion to maintain a freshness and currency. That role fell to Sabina Myers, a recent NIDA graduate.

Co-director Constantine Costi has been described as having a ‘light touch’ on this revival, and I would have to agree. Whereas conductor Carlo Montanaro was all gusto in delivering Massenet’s luscious score, from the pastoral flourishes of Act I’s rural setting to the passion of Act IV dying scene – it is the music that is the real gem of this opera.

American tenor Michael Fabiano did a fantastic job in his debut as Werther. He returns to Sydney after his success last year in Lucia di Lammermoor. Werther is a role that one can see he will grow into well, settling into the brooding character and shifting emotional libretto.

Fabiano is renowned for his intense, character-driven performances and has been described as “opera’s risk-taking tenor” by the New York Times. His theatrical sensitivity and drama for Werther was nicely communicated in this Sydney production, and by Act III his performance was ratcheted into full gear to capture our sympathy for his demise, his powerful voice delivering with appropriate power, warmth and clarity.

Russian mezzo-soprano Elena Maximova was perfect in the role of Charlotte, building her performance to a vivid and passionate conclusion. Theatrically she captured the pain of being caught between duty and love – especially her delivery of the melancholic Letter Aria in Act III where she moved from the “big sister” duty of mothering sibblings to a mature woman wrestling with her feelings. This fine grain understanding came naturally for Maximove, who has performed Charlotte for a number of years.

Holding the stage well with such a seasoned mezzo, soprano Stacey Alleaume as Charlotte’s younger sister Sophie, was agile, animated and sparkling, both vocally and dramatically. I loved her energy on stage.

Luke Gabbedy as Albert, Charlotte’s fiancé-cum-husband, in comparison felt stiff, and while he could punch out Massenet’s baritone demands, he did little to grab the hearts of the audience. He was perhaps a little too upright.

Richard Anderson as Charlotte’s father (Le Bailli) added that comfortable maturity to the narrative, delivering but not overwhelming. Nicholas Jones and Andrew Moran, playing his drinking buddies, Schmidt and Johann, rounded out the tableaux.

Werther remains one of the top 60 works performed around the world, and yet this is not a story of free love and bohemian abandon that punters can relate to today. At times it lacks momentum.

But there is clearly a reason for such popularity. The music is commanding and yet lyrical; the story while at times feeling slow ticks the romantic tragedy box. Simply, this is not a tough opera to enjoy.

While I am not going to walk away and don my yellow and blue like those sensitive lads in Goethe’s time, the enjoyment of Werther is genuine and shared by many.