Who needs fireworks when you can have snow on Sydney Harbour? La Boheme’s Parisian setting adds a surreal edge to this year’s Handa Opera.
Gina Fairley 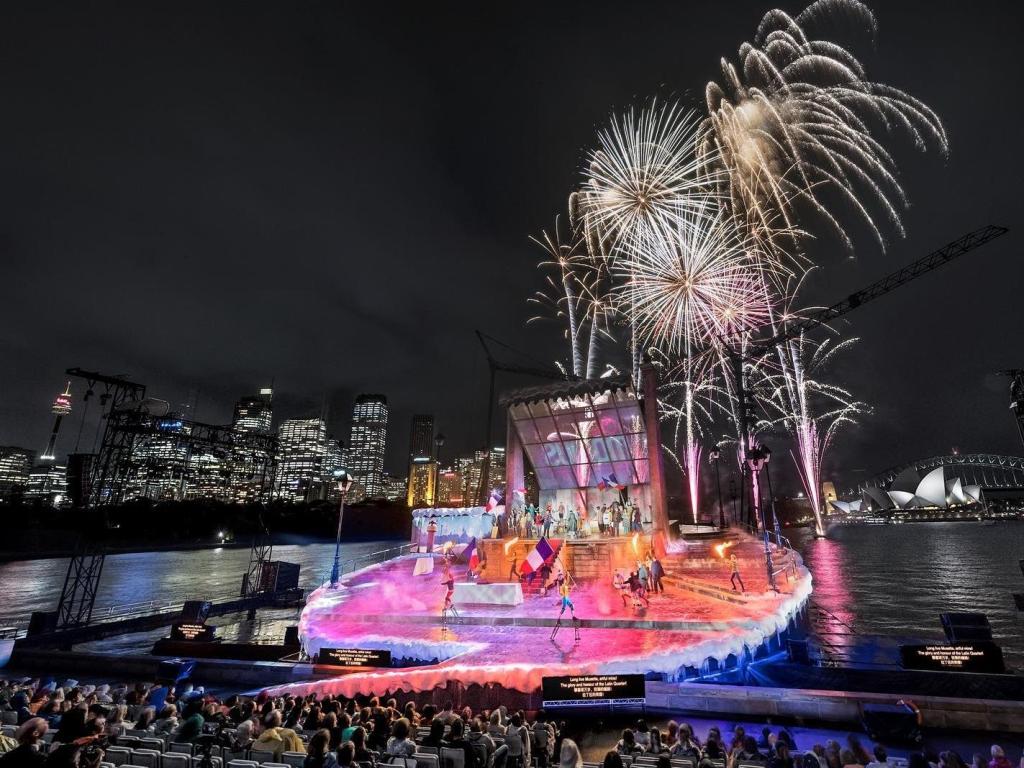 Handa Opera on Sydney Harbour has become one of those annual events you wait for, not dissimilar to the Royal Easter Show, the Melbourne Cup or New Year fireworks. Collectively, they add up to something that is unique to Australia.

Sitting on bleaches, with Luna Park sparkling in the background, ferries crossing the harbour and the city soaring behind the stage in all its grandeur, Handa Opera on Sydney Harbour reminds us that opera is an event all can enjoy. As Opera Australia’s Artistic Director Lyndon Terracini reminded the crowd on opening night, this is the company’s primary source of first-time opera ticket buyers. So does it deliver?

Opera Australia did not disappoint with its choice of La Bohème, Puccini’s iconic operatic blockbuster. But unlike a blockbuster – which takes its name from the crowds that snake around the block – the bleaches felt a little thin for this opening night, perhaps dismissing the production with the brush, “I’ve seen it before”. It is their loss.

Having been a regular at the harbour event for the past five years, it would seem that a number of technical difficulties that have plagued past productions have been ironed out.

The sound quality, which has persistently struggled with amplification in a windy outdoor environment, was nailed by Tony David Cray and his audio team; the set was reduced and less gimmicky, which overcame clunky transitions and poor sight lines of the past, while perhaps a little less “wow” – that was left to the singing this year.

The only flaw was a short-lived one and beyond OA’s control – that of former US President Barack Obama’s security detail, a helicopter that annoyingly buzzed like a giant mosquito overhead while the celebrity President attended a function at the Art Gallery of NSW down the road.

What was faultless was the singing. The lead roles of Mimi and Ruldolfo were sung by Romanian soprano Iulia Maria Dan – in her Australian debut – and Korean tenor Ho-Yoon Chung. They were superbly matched vocally and their energy and rapport on stage delivered expectations of the tragic love story.

Their early attraction upon meeting was sensitively sung by Chung as he takes Mimi’s cold hand, Che gelida manina (What a cold little hand) and tells her of his life as a poet. She responds with Sì, mi chiamano Mimì (Yes, they call me Mimì) describing her life as an embroiderer. Their Act 1 duet, O soave fanciulla (Oh lovely girl), sealing their love and setting the tone for this production.

Australian Soprano Julie Lea Goodwin as the sultry, testy Musetta and Samuel Dundas as the painter Marcello equally had great chemistry on stage – both dramatically and vocally strong – while supporting performers Richard Anderson as Colline the philosopher, Christopher Hillier as the musician Schaunard, and John Bolton Wood as the landlord Benoit created the rounded experience that holds a production together.

La Bohème is an intimate production, with small clusters on stage at any one time. While its popularity and operatic hits make it a good choice, to deliver that intimacy in an outdoor arena is a tough call. The quality of the voices held audiences, and is a credit to the cast working in a difficult environment.

Dan Porter’s set was less spectacular this year, perhaps learning from his rickety tower in Turandot (2016). For a start, the setting was less flamboyant. Director Andy Morton chose to hit history’s fast forward button, taking the original 1840s setting for La Bohème into May 1968 – its bohemian student uprising that stopped Paris’ Latin Quarter and was considered a cultural, economic and social turning point in France’s history.

Conceptually it worked, however it was a little hard to draw the connection in the first Act with few visual triggers. The main prompts occurred at interval, when burning cars were lowered by cranes onto stage, along with protest placard, riot debris and the distant drone of sirens.

Marco Devetak’s video designs added further context with a montage of newspaper clippings projected on the roof-top windows of Ruldolfo’s studio apartment. However, they came across as amateurish, somewhat clunky, their animations tinged with a trite quality.

The costumes under Porter were on point with their sixties chic adding the necessary punch of colour to this washed out set. And for this production the fantastic Opera Australia dancers – which do an incredible job in extending the opera experience – were replaced with carnival performers, someone on stilts, a monocycle, and acrobats.

A Handa production is never complete without fireworks; audiences got those at interval as usual, their cheesy connection with the passionate expression of the young lovers. A new addition this year was snow – or more like a blizzard – showering down on the audience in their bleachers. Some punters prepared for inclement weather even popped up an umbrella or two. I did wonder about OH&S though.

Brian Castles-Onion, who has conducted each of the Handa Opera past seven events, again delivered under difficult circumstance while bunkered under stage. A nice touch was bringing the orchestra onstage with curtain call.

La Bohème is the seventh edition of Handa Opera on Sydney Harbour and is as rounded and resolved as time would expect in this venue. But unlike many events that are plagued with the “seven year itch”, this Harbour spectacle continues to please. High time you get yourself along to one if you haven’t already.