The original Maestro 10 Concert by the Queensland Symphony Orchestra (QSO) in 2020 had been scheduled for this weekend.
Suzannah Conway 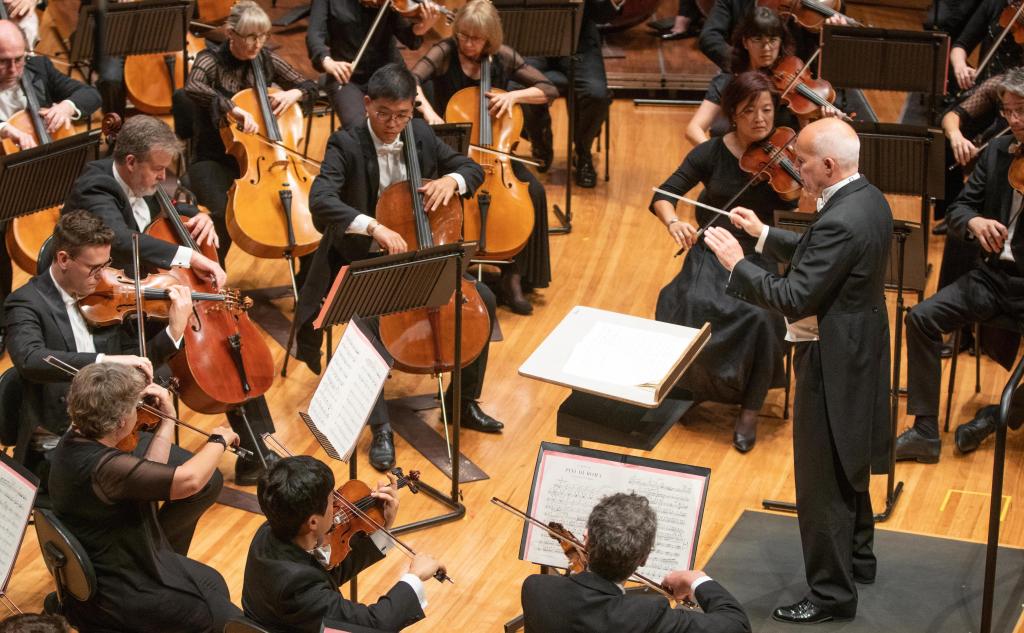 Given the restrictions of COVID-19, and the lack of in-house concerts for some months, unfortunately this performance of Beethoven’s Emperor became only the third and final concert for the orchestra this year. But it was an excellent finale.

There were changes to the planned program and personnel, though celebrating his 250th anniversary year, Beethoven’s famous piano concerto remained supplemented with Respighi’s glorious Pines of Rome. A welcome addition was the return to the podium of Conductor Laureate, Johannes Fritzsch, with the lesser-known but no less illustrious Australian pianist, Daniel de Borah, doing the honours in the Beethoven.

Beethoven’s Piano Concerto No.5 in E flat, called ‘The Emperor’, is perhaps the first concerto to truly test the quality and expansiveness of the modern piano. Encompassing a six-octave range, the newly-designed keyboard allowed Beethoven to explore the versatility and brilliance of the instrument in this concerto. In so doing he presented a major virtuosic challenge to any pianist with an almost non-stop range of cadenzas, arpeggios and flourishes to impress the listener.

The opening fast Allegro movement had barely got underway before the piano launched into a virtuosic cadenza, with some exhilarating flourishes from de Borah and loud emphatic chords from the orchestra, leading into the main vivacious theme. It was an exciting and powerful introduction.

Both pianist and orchestra interacted well during the first and second expositions, with some vigorous thematic exchanges, offering a complex secondary theme of dominant and tonic chords which were very well played. The finesses of the high strings, with some fine arpeggios from the pianist, were complemented by the woodwind and horns adding texture and depth.

The solo piano’s third theme introduced a more plaintive and languorous feel before a fierce display of high trills and a series of breathtaking runs up and down the keyboard brought the movement to a climatic conclusion.

The Adagio: un poco mosso offered a complete change of pace; the slow, almost ethereal nocturne was measured and beautifully paced. De Borah played the long slow passages pianissimo with delicacy and a sensitive attention to detail, hanging onto soft notes while displaying impressive trills. The muted strings and sensuous woodwind offered a fine accompaniment to the piano, as did the final chilling and plaintive call of the bassoon.

There was a well-placed transition from the piano leading into the Rondo: Allegro, a fiery and spirited third movement. Initially led by the piano, the theme bounced from orchestra to piano with alacrity, engaging individual instruments and offering a jaunty, almost dance-like theme amid the various cadenzas and pianistic flourishes which led to a powerful finale.

Pianist, Daniel de Borah, was technically impressive, proficient at managing the various virtuosic leaps and flourishes with great skill, adding depth and power to the cadenzas. There was an excitement and passion in his fast movements, working playfully and accurately with the orchestra in the musical exchanges back and forth. His ability to coax and control the slow, soft passages of the Adagio was first-rate. He was supported throughout by Maestro Fritzsch whose clear authority and direction of the orchestra was excellent.

For an encore, De Borah offered the Bach arranged Siloti Organ Prelude in G minor, a hauntingly evocative piece which was both solemn and dramatic. This demonstrated yet more of his pianistic skills to great effect, being well received by the audience.

Pianist, Daniel de Borah, was technically impressive, proficient at managing the various virtuosic leaps and flourishes with great skill, adding depth and power to the cadenzas.

Respighi’s Pines of Rome is one of his best-loved works, a four-movement symphonic poem, depicting pine trees in four separate locations and at different times of the day in Rome. The work is full of descriptive musical colours, offering excellent opportunities for individual players in solo parts, hence its attractiveness to musicians as well as audiences. The QSO clearly relished this work and played beautifully, under the clear direction of Maestro Fritzsch whose interpretation and emotional intelligence gave a very fine reading indeed.

Set in the Villa Borghese, the allegretto vivace movement got off to a lively start with lush strings, tinkling percussion and harp, alongside forthright wind and trumpets, setting the scene for children playing, dancing and shrieking. The abrupt ending to this joyful music contrasted sharply with the dark, sombre Catacombs of the lento movement. Here the horns and trumpets took precedence with both the organ and a mournful trumpet playing a finely balanced Sanctus hymn, assisted by a poignant contribution from the Cor Anglais.

The moonlight nocturne of the Janiculum pines of the third lento movement was stately and languorous, with the added beauty of bird song. Brian Catchlove’s atmospheric clarinet, portraying the nightingale’s song, was sensitively played and provided a perfect foil to the real nightingale recorded for the movement’s ending.

In the final tempo di marcia movement, Pines of the Appian Way, Respighiused extensive woodwind, percussion and brass, including flugelhorns, to represent the marching armies of Rome at dawn. A terrific composition, the orchestra went all out to make a powerful statement with increasing crescendos throughout.

Maestro Fritzsch was in his element commanding his orchestral forces including organ and the trumpets positioned high in the organ loft. He brought the triumphant whole to an immensely satisfying end to a truncated 2020 QSO season.