A degustation of some of the shiniest shows from the 60-strong program; soupcons of performance from various cabaret traditions.
Liza Dezfouli 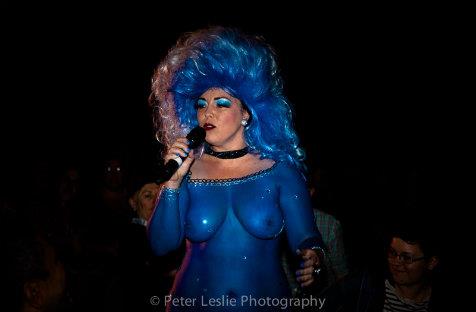 The Melbourne Cabaret Festival 2013 is all grown-up. The opening night gala at the splendid Palais Theatre was a degustation of some of the shiniest shows from the 60-strong program, presenting soupcons of performances from a festival spanning a massive variety of cabaret traditions. This year’s festival sees 150 artistes present performances ranging in style from old school big-song Broadway style glamour and sophistication, to gaspingly subversive gender-bending rudeness; as a sampler plate of the Cabaret Festival, the Gala night did Melbourne proud.

Fem Belling, no mean talent herself, hosted the night clad in an array of stunning, genuine 1920’s gowns. Her rendition of ‘Stormy Weather’, from her show about diva Blossom Dearie, was rich and moody. For the classic martini night’s style of piano and song, go no further than Australian smoothy Bradley McCaw, who won last year’s Best Newcomer award at the festival. His own songs are poignant, and rich in lyrical detail. David Pomeranz, whose show Chaplin – A Life. In Concert promises to be moving and intriguing, offered up a few of his greatest successes from a life-long career, including a unique staccato approach to acoustic guitar. Adam Guttel is a Tony award winner singer/songwriter who delivered a sample of Sondheim-esque songs from musicals he’s currently composing. Also in the grown-up, classic vein we heard jazz harpist/chanteuse Tara Minton.

The more subversive acts of the festival include Trevor Ashley and Rhonda Burchmore, who presented a couple of tunes from Little Orphan trAshley – proving that Ashley is as hilarious as ever. Spanky is an underground crowd favourite with fierce vocal strength, a performer with obvious Rocky Horror parentage who performed songs from his drag show, Dead Bitches.

Outrageous New York artiste, Joey Arias, who paid tribute to Billie Holiday and the Beatles, is mysteriously and gothically androgynous, a daughter of Diamanda Galas, with a voice of smoke and menace. The luscious Yana Alana, toute nue et toute bleue, was almost too much for the gentleman in the seat next to me. She did her own, very funny, songs and if you enjoy travelling beyond Zone Comfort for a night, she’s your gal.

The great Mary Wilson, founder of The Supremes, rounded off the night with songs from her show honouring Lena Horne, Stormy Weather– the Lena Horne Project. Hearing Wilson tell of how she met Horne in the 1960s was just delightful. She sang the ‘The Man I Love’ and a moving magical version of ‘Yesterday, When I Was Young’. At 69, Wilson delivers the true diva experience and if, to begin with, her voice didn’t have quite the power it once did, she warmed up quickly to deliver all the range, nuance and beauty you could hope for.

It’s not only me whose secret cabaret performer alter ego longs to belt out some classics after a few drinks. Huge and vicariousness thrills are to be had, though, by seeing real talent on stage – the strength of this festival is its incredible variety, and you have two whole weeks in which to treat yourself to a show.