Third iteration of ACCA’s Macfarlane commissions stages a monumental show with a record-breaking number of artists who reinterpret an age-old medium.
Celina Lei 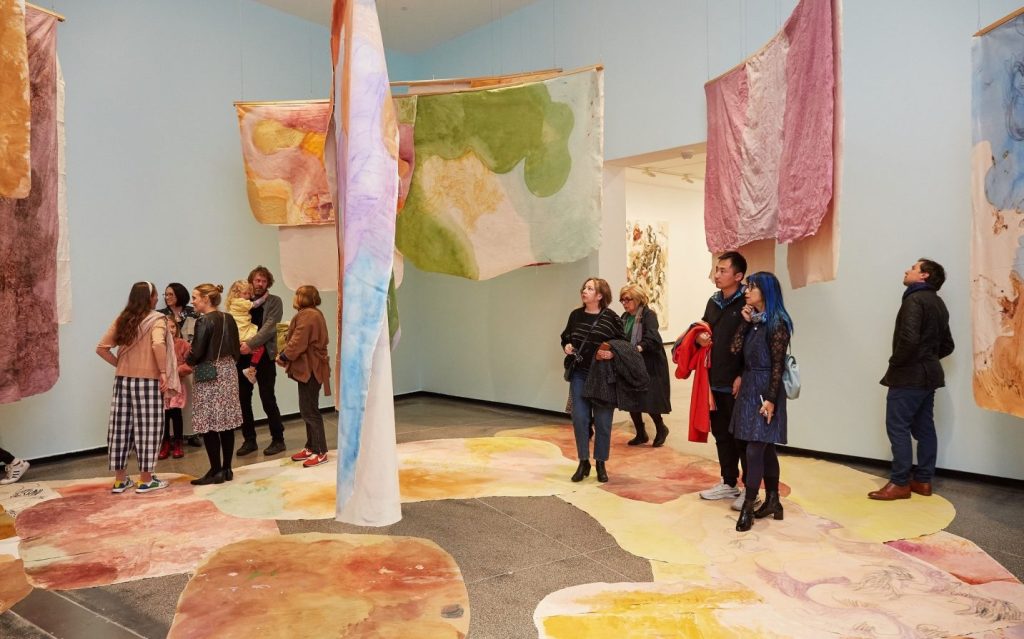 The Macfarlane Commissions first launched in 2018 with The Theatre is Lying, then the biennial exhibition delivered Overlapping Magisteria in 2000. Combined, the two exhibitions commissioned 10 artworks. In this year’s iteration, the show features a bumper eight artists, some with the biggest pieces from their careers, specifically made for the Australian Centre for Contemporary Art (ACCA).

‘We were interested in looking at the ways in which painting is not necessarily confined to the easel or studio – it actually intersects with everyday life and the world at large,’ explained Max Delany, ACCA’s Artistic Director and CEO.

Titled Like a Wheel That Turns: The 2022 Macfarlane Commissions it takes its cue from a quote by artist Marlene Dumas on the ability of the painting to transverse multiple timeframes.

Delany continued: ‘Many of these works speak to the present but also the past; they speak to their country, to ancestors, family histories, world cultural histories and diasporas.’

A clear example are Gian Manik’s paintings in the second gallery, which combined skilfulness in the medium alongside intimate memories, war imagery and internet gay pornography.

The series of eight paintings are almost cinematographic. The work Pain hones in on the details of a horse’s eye (a reference to the Dutch masters and Manik’s maternal heritage) and another presents Fabergé pansies through two lenses, one with the petals opened to reveal AI-generated faces.

Manik’s works present an interplay between ‘authentic’ genre painting and fixated identities and conflicts in our present day that challenge the medium.

Another work which plays on identity and the idea of an artist’s self-portrait is Jason Phu’s everyone is dead, except for me. everything is futile, and i am tired. i wait in my little house, for the winter to take me, an installation built from the ground up with an array of memorabilia, every-day objects and obsessive collections.

Here Phu presents himself as an old, dying artist in a little hut, where birds chirp, snoring is heard and the digital display of a fireplace runs simultaneously with a rotating fan. The work might signal an artist’s demise, but ironically – and intentionally – it presents endless entertainment for the viewer.

Painting as a (physical) construct

Another aspect that Like a Wheel that Turns explores is the intersection between painting and other disciplines, such as literature and architecture.

At the gallery entrance, two of Esther Stewart’s architecturally scaled awnings are presented overhead. Sized to the windows in the artist’s apartment – from living room to bathroom – the works sit at a quirky intersection between the intimate and the industrial, simultaneously bringing the outside in and the inside out.

It plays into the very fabrics of ACCA and its contextualisation in the Melbourne art scene. And when the show ends, and the work is painted over, it too will become part of ACCA’s history and physical make up.

Also playing with spatial experiences is Jahnne Pasco-White’s Embodied watery entanglements, a jungle of canvases draping from the ceiling and sprawling across the floor. Natural dyes and recycled materials form tactile panels that segment the space but without the usual harshness of a solid barrier.

Described as ‘a collective body of painting’, the works – pigmented with organic matter such as fruit peels, tumeric and coffee grinds – seem to form their own logic and ecology, one which the artist lets develop rather than control.

Attached to one of the hangings are two pages of the artist’s notes where her thought process is laid bare, extending an invitation for viewers to embrace their own interpretations. The opening line reads: ‘Painting is the language of form and space that reminds that I am made of the same stuff as the world.’

Cultural histories and diasporas also run through many works in the show, including those by Phu and Manik, but also prominently in the practices of JD Reforma and Nadia Hernández.

Quotes, memes, and collected snippets of overheard conversations are stenciled in a vibrant orange-red on coconut husks in Reforma’s Fibre optics; an intranet of virtue, the fruit itself laden with cultural meaning.

Delany explained: ‘Coconuts have really strong cultural signifiers in history but also our modern-day culture, if you think about their association with beauty and wellness – but simultaneously they are exoticised and stereotyped.’

This is especially interesting with Reforma’s experience working in arts communication and marketing, as these phrases function simultaneously like slogans, puzzles or clues. Together they provoke reflection on seemingly casual everyday phrases that are now laid bare and contested.

The phrases that Hernández adopts, in contrast, speaks to family history and shared wisdoms. The textile work, De nuestra felicidad, spells out ‘we are the owners of our own happiness’, a word of encouragement from the artist’s mother.

Born in Venezuela, Hernández’s works also resonates with history, modernism, concrete and neo-concrete art and poetry as well as the political climate of the country.

Apart from the main gallery, continuity throughout the exhibition is created almost through an overflow – one of Hernández’s sculptural works lead the way into the room dominated by Manik, and two more of Stewart’s awnings (slightly awkwardly) sit next to senior Pitjantjatjara artist and ngangkari (traditional healer) Betty Muffler’s three-by-five-metre painting, Ngangkari Ngura (Healing Country)

With five of the artists taking up a single gallery, the question is whether this year’s Macfarlane exhibition becomes too overloaded, almost brimming with content wherever the head is turned.

There’s a need for viewers to take a slow, contemplative and immersive approach, to be absorbed by the minutiae of this show.