Relating to the autonomy of scientific and religious realms, this exhibition presents myriad forms of encounter with the world and contemporary art.
Karl Sagrabb 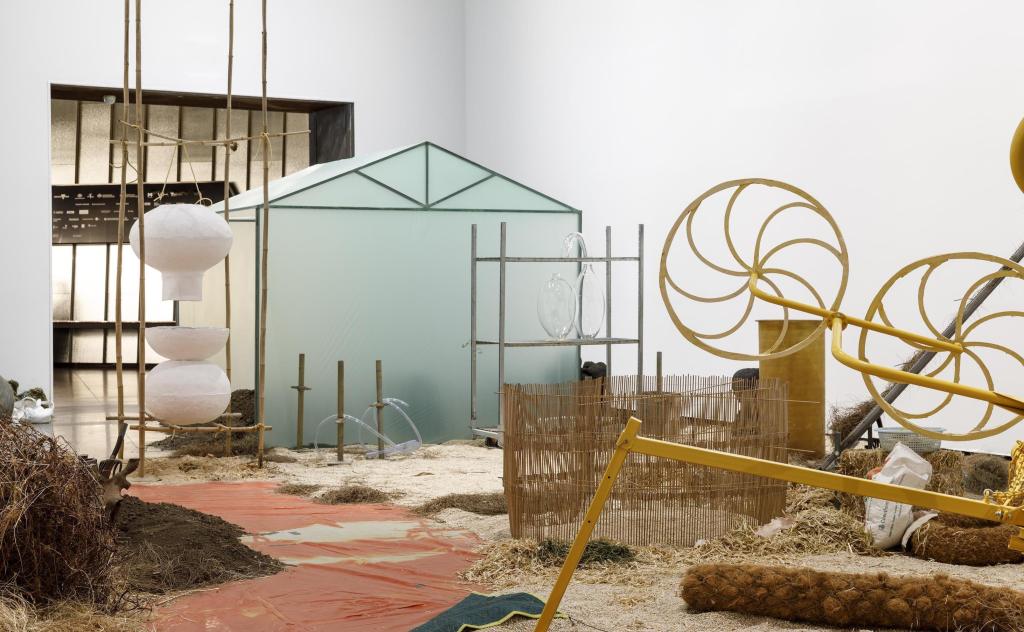 Overlapping Magisteria: The 2020 Macfarlane Commissions at the Australian Centre for Contemporary Art (ACCA) is a phenomenological exhibition, conveying the embodied experience of phenomena.

With a title drawn from Stephen Jay Gould’s phrase, ‘non-overlapping magisteria,’ relating to the autonomy of scientific and religious realms, this exhibition presents myriad forms of encounter with the world and contemporary art. It is perhaps the perfect exhibition to see following the 111 day lockdown in Melbourne and the consequent disembodied digital existence most Melbournians inhabited.

‘A phenomenological exhibition, conveying the embodied experience of phenomena.’

Approaching the two entryways in the industrial structural design of ACCA’s building, viewers come across pink plasticine placed between the grooves of the large steel panels of the building’s structure. This is Sam Petersen’s work, I’m Still Feeling It (2020), and it conveys a sense of the indomitable yet mutable nature of life itself, seeping through and into the seemingly impermeable structure. For Petersen, plasticine represents a kinetic method of communicating and feeling, representing and registering the body of the artist and others.

Read: Exhibition Review: Dark Moon Rising and For the Sake of Love

Further enhancing this exhibition’s approach to the ideas of the body in space is Mimosa Echard’s Closed Eyelids (2020). Like Petersen, Echard utilises pink in the works because of its historical association with the body and sexuality.

Closed Eyelids comprises of several collage paintings that resemble membranes, speaking to the film that has existed between all of us over the last year of the pandemic. Within these collage paintings, personal and cultural artefacts are ‘enbalmed.’ Strings of pearls, rings, and medicine capsules are all captured within the film of the membrane. Coupled with soft floor furnishings, and hanging lamps shrouded in thousands of pink, red, and white beads in a work titled Sap (2020) – that also encompasses items of Catholic iconography, sex toys, and DNA strands – Echard creates a synchronous immersive experience that revels in a conflation of art and the body, and personal versus public space.

Following a focus on the body are two more cerebral works, that of Robert Andrew and Sidney McMahon. Perhaps the most powerful work of the exhibition is Andrew’s kinetic installation, Tracing inscriptions (2020).

Andrew’s work features a Cartesian grid, a computational plotting system that controls movements of one hundred strings, to the ends of which are attached charcoal branches collected after bushfires, some of which have been dipped in ochre. Encoded into this plotter are a series of words in the Yawaru language. These words are translated into abstract charcoal drawings on the white gallery wall in a mesmerising manner.

‘Perhaps the most powerful work of the exhibition is Andrew’s kinetic installation, Tracing inscriptions (2020).’

This work transitions the viewer from thinking about a body – their body – in space, to thinking about the confluence of science and art. As a descendent of the Yawuru people from Broome, Western Australia, Andrew utilises live translations of language into imagery through raw materials to demonstrate both the freedom of the Yawaru language, and the relationship between language and place, space and meaning. The work deliberately opts against providing literal and linear translations of the English language, especially with the ultimate machine of linearity: the cartesian grid. Instead, the Yawaru words are free to move, and by not providing an English translation, viewers perceive a refusal to acknowledge English as the language of this land.

McMahon’s work comprises an installation of choreographed – through behind-the-scenes computer programming – sail cloths that rise and fall according to pulleys suspended from the ceiling, and billow according to programmed currents of air from carefully positioned fans. Paired with these sails is a two-channel video installation depicting the artists fingers crawling and searching around their own mouth. At first inscrutable, McMahon’s work draws viewers out of their mode of sensory experience and embodied viewing; the installation requires viewers to dig deeper into the artist’s story and rationale to gain access to the work.

By contrast, Isadora Vaughan’s Ogives (2020) returns viewers to an immersive environment that blends sculpture, industry, and organic matter, demonstrates an understanding of the world as irrevocably altered by humans: there is no natural or un-natural environment, organic and synthetic – it is all one. Ogives invites viewers to participate, to wander through this staged environment and thereby alter the installation through presence.

‘What is absolutely on show is the embodied nature of experience and the inextricable ties between humans and the world.’

Through creating a highly sensory exhibition, without veering into the realm of immersive sensory spectacle, Overlapping Magisteria certainly conflates various realms: that of science and art, the body and space. While undoubtedly the nature of art and creativity veers towards ideas of spirituality and the metaphysical – science in Gould’s terms is informed by empirical facts while religion and spirituality is subject to emotional and moral influences – it is difficult to see where the conflation of science and metaphysics is concretely demonstrated in this exhibition. Yet perhaps in conflating some realms, we may conflate all realms. What is absolutely on show is the embodied nature of experience and the inextricable ties between humans and the world.

Karl Sagrabb is a freelance writer based in Melbourne and is studying for a Master of Art Curatorship at the University of Melbourne, within the School of Culture and Communication. He is a research assistant intern at the Ian Potter Museum of Art and has been an Academic Editor of Antithesis Journal, a peer-reviewed arts and humanities journal produced in association with the School of Culture and Communication at the University of Melbourne.