A survey of an iconoclastic artist who explored feminist ideology and advocated within community arts.
Vanessa Francesca 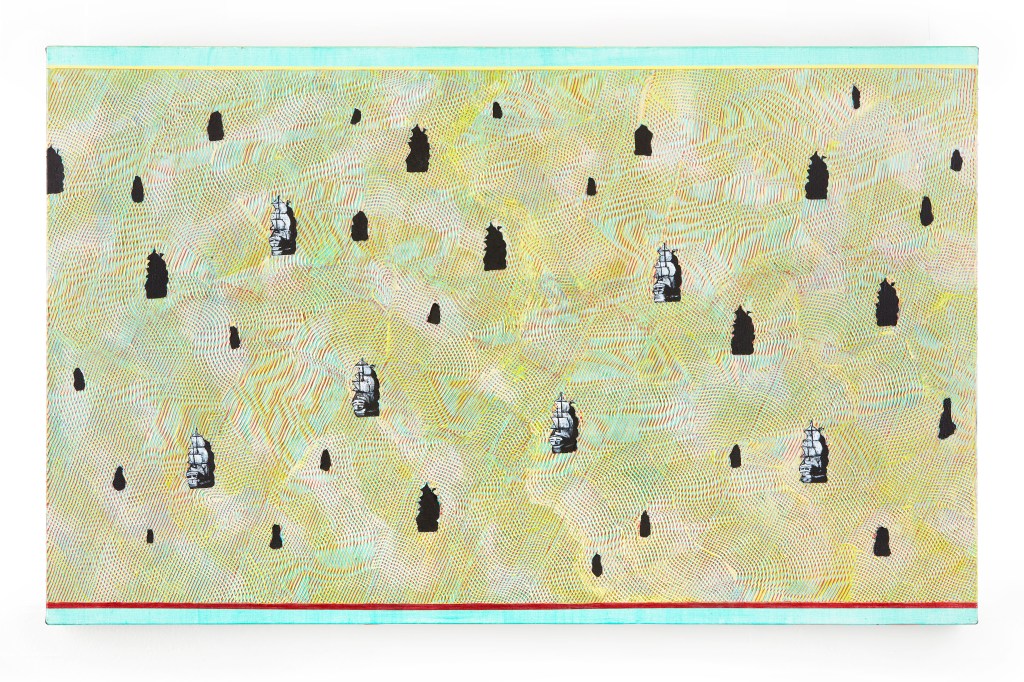 The history of women’s painting in Australia is a history spoken of in murmurs rather than in raised voices. But On and through the Surface, an exhibition of paintings and drawings currently running at the Monash University Museum of Art gives a glad shout and lifts its voice to this proud tradition in Australian art.

This Vivienne Binns retrospective honours an artist who has worked across multiple mediums and is a thought-provoking engagement with the role of the artist in the community. Binns was for a long time a lecturer at the Australian National University, and this survey speaks to a fascination with innovation. The question is raised too, of how an artist supports themselves, and offers some surprising answers.

Binns’ early work uses the vocabulary of psychoanalysis to create some memorable paintings and drawings referencing genitalia or themes of female empowerment. Emerging from this period, her 1985 painting The Aftermath and The Ikon of Fear was acquired in 2021 for the collections of the Tate and the MCA, amplifying Binns’ work for a local and international audience.

The artist worked for many years as an enamel worker, a fact that’s reflected in what she calls her ‘funky ashtrays’. These artisanal objects with their psychedelic colours signal some of the early preoccupations of Binns’ first period: with bright colours and stark shapes, they allude to the problem of mass production and joyously riot against it.

Psychedelic colours are another theme of Binns’ paintings from the late 60s, which combine psychoanalytic motifs with suggestive imagery to make a statement about gender and sexual relations. This motif is developed with a series of drawings on the theme of castration. This odyssey into the self provides insight into some of the primal urges at the heart of the human experience.

A centrepiece of the exhibition combines Binns’ psychoanalytic insight, enamel practice, communitarian spirit, and artistic vision. Mothers’ memories, others’ memories is a series of enamelled postcards created by Binns and collaborators in this iconic community art project, depicting personal and family photographs. The screen-printed imagery is created in her signature vitreous enamel on steel technique, with the postcards fired at high heat to produce an array of bold colours.

The figure of Captain Cook rounds out the exhibition with a series of post-colonial works depicting abstract landscapes that showcase the geometry of Binns’ pattern-making, while a response to an Australia Council-funded travel sees her produce work that harks back to Japonaiserie and a return to abstract art characterised by pattern and design.

Comprising over 100 art works taken from six decades of Binns’ career, On and through the Surface is a varied and witty exhibition essential for anyone seeking to understand the period of Sydney during feminism’s second wave. It’s specialised but still enjoyable and will reward the open-minded viewer.

Vivienne Binns: On and through the Surface

Vivienne Binns: On and through the Surface will be on exhibited until 14 April 2022 at the Monash University Museum of Art before touring to the Museum of Contemporary Art Australia in Sydney from 15 July – 25 September 2022.