At a time when many of our art schools nationally face perilous cuts and closures, this exhibition curated by Daniel Mudie Cunningham couldn’t be more timely.
Gina Fairley 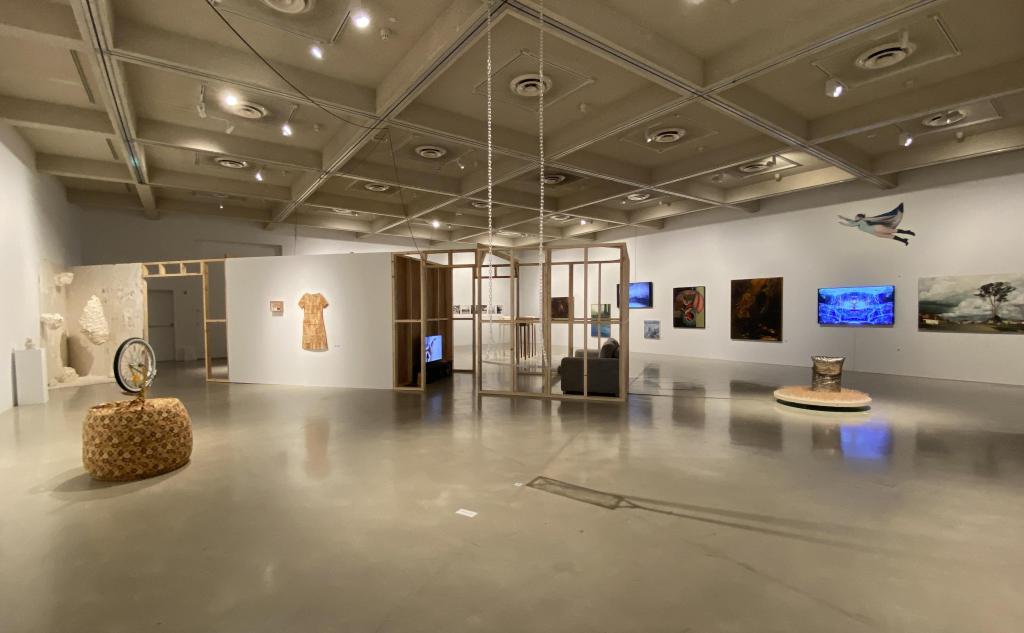 At a time when many of our art schools nationally face perilous cuts and closures, this exhibition curated by Daniel Mudie Cunningham couldn’t be more timely.

In 2009 the art school was closed. In a nutshell, this exhibition pays a nod to its legacy – from its first graduating class in 1986 to its closure – through the work of an alumni of students, including artists such as Brook Andrew, Liam Benson, Raquel Ormella, Savanhdary Vongpoothorn and Justene Williams.

While name dropping can add weight to a case, rather what this current exhibition demonstrates is an incredible chapter in Australian art history that pioneened experimentation and risk-taking, and pushed difficult topics into the spotlight, across a broad variety of media.

That mix can make curating a show of this scale and ‘mash’ a challenge, but Mudie Cunningham does an incredible job.

The exhibition has been developed as a partnership between Campbelltown Arts Centre (C-A-C) and Western Sydney University for Sydney Festival, and also includes an extensive website that tracks individual reflections by artists as well as commissioned texts – it is great to get lost in!

Walking in to C-A-C it is an electric experience – a cacophony of sounds, structures, flickering videos and inviting nooks. It immediately shakes up our 21st century ‘PC reverence’ and pigeon-hold familiarities.

One device Mudie Cunningham has used across this enormous show, is to build out structures that help to divide the space and create flow or navigation. They also work brilliantly to shelve equipment. Overall, it has a rawness to it, and yet a sophistication in understanding spatial engagement. It’s super successful in his hands.

The show; the artists

While we are quick to categorise much of this as “old” work, it has a vibrancy that is very much at home in a contemporary art exhibition of our day. It is not fresh, but rather a revisitation that is very alive. High voltage if you like.

In the entrance gallery the work of Tony Schwensen sets the tone – a photograph projected onto a temporary structure using an over-head projected -–the face screaming out to the viewer. Mudie Cunningham explains that the work was a ‘tribute to Matthew Wood, his UWS classmate and friend who died of AIDS at a young age.’

He told ArtsHub: ‘This work appears on a structure that is included in the show as a ‘project space’ like incursion which will changeover every week Space YZ is on – a strategy that is meant to ensure the shows feels as though it is constantly evolving like a studio.’

Moving into the main gallery central is a faux lounge setting with Ivan Lisyak, In the end, there’s nothing left to say (2003) manically chatting away from clipped news and pop culture shows. On the long wall is a salon hang of largely paintings interspersed with the off video. As a grouping it has so much energy.

Off to one of the side galleries, visitors are welcomed by the sound of smashing glass in a fabulous single channel projected video work by T.R Carter, Tell me something I don’t know (2008), a woman dancing with a stagger as wine bottles are thrown at her. In front stills a corral of videos, floor mounted, and each in dialogue with the body and sexuality. This room is a power pack of emotions, politics, agitations and push backs.

Installation view Space YZ with video by T.R Carter Tell me something I don’t know (2008), and other works. Photo ArtsHub.

There is a kind of jostle of anarchy and individual discourse that oozes out of every pore of this exhibition. I love that the sound bleeds are unapologetic across this exhibition. It adds to the kind of furnace of creativity – the engine room feel – that was this gallery space and art school.

There is a great sense of materiality and play across the exhibition – a real mash up where hierarchies are thrown out the window. It is incredibly instructive as a time document, of where University based art schools have come from – and sadly where they sit today.

That said, this exhibition is not steeped in too much nostalgia (though much of the equipment will raise a smile for an older art going audience). I see it more as a position of strength – one to inspires us to fight for the next chapter for our art schools.

This exhibition is a must. It offers a reality check for now. It pays a wonderful nod to the legacy of our art schools, and it is also an incredible sound example of partnerships and savvy curation.