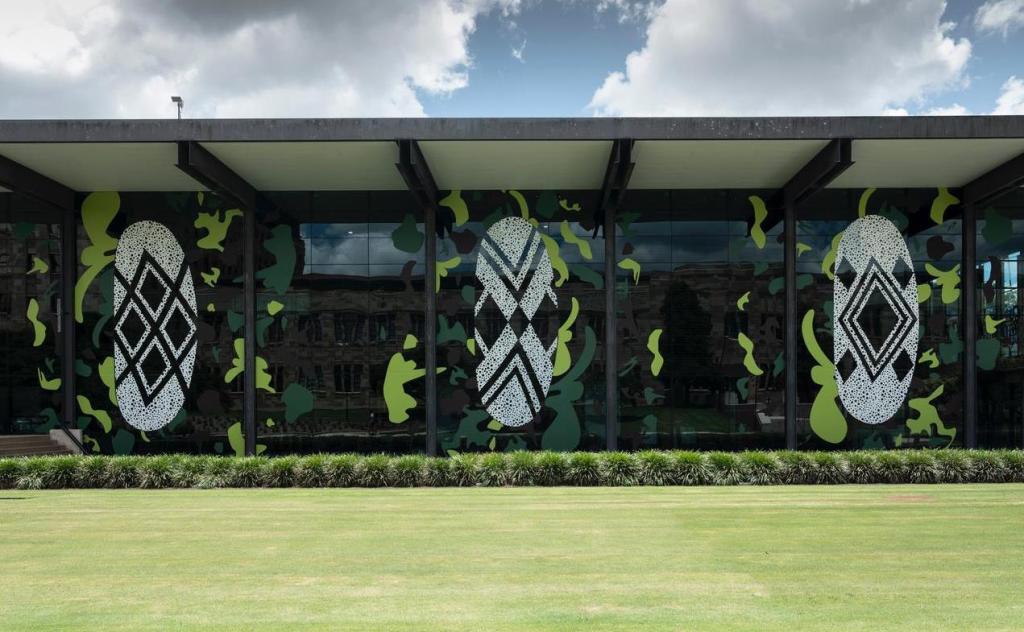 In was back in 2004 that a group of Aboriginal artists were feeling tetchy about the agendas around the promotion of Aboriginal art in Queensland. So much so, that they banded together to form the Brisbane-based collective proppaNOW – an institution in the journey of Aboriginal arts activism in Australia.

Their intention was to be thought-provoking and raise awareness of the Aboriginal urban condition.

Their journey over the past 17-years is mapped in the exhibition OCCURRENT AFFAIR: proppaNOW at UQ Art Museum. What is interesting about this show, is that it is curated by Blaklash (Troy Casey and Amanda Hayman) – a next generation of Brisbane First Nations arts workers – and effectively is a handing of the baton.

We get a sense of that history in the video documentary narrated by Vernon Ah Kee, proppaNOW (2021), which interviews each member of the collective. It is pretty dense for the time most people have to view a show, but within a university environment, it is the perfect collateral to extend conversations over this exhibition’s longer hang.

However, the real energy comes through the works themselves, which are as fresh and provocative as the time when they were made – some drawing from the archives, and others commissioned for the exhibition.

It comes after a five-year hiatus by the collective, enabling them to focus on their individual careers, and its placement in a university gallery was a deliberate choice, one signalled by the use of the very building itself.

How it all started

This exhibition is so thoughtful in the way it is hung. What the visitors first encounter is Herd’s vinyl intervention, In defence (2021), on the façade of the gallery – an emblematic agitation that is carried forward by Gordon Hookey’s protest banners on the ‘other side of the glass’ – it is a work by Richard Bell, however, which perhaps best sets the tone.

His portrait of former Premier Johannes Bjelke-Peterson (JBP) – Little fish are sweet (2021) – is paired with a paper back of cash. He bares a rifle and is uncannily ‘facing off’ that same glass façade of the gallery. In 1985 JPB was awarded an honorary doctorate in the building, which outraged students who stormed it in protest. (The windows were retrofitted in 2004 as a repercussion).

Bell draws parallels for a younger generation, who may not have known JBP, but connect with the dialogue of protest raised through Trump protests last year, which equally speak of power, race, politics and corruption.

We see that connection again with Hookey’s banners – which were used on ‘Invasion Day’, 26 January this year – and are within sight line of Vernon Ah Kee’s inverted riot shields, and Bell’s painting, U can’t touch this (2021), which shows a male wearing a t-shirt with the Aboriginal flag while being arrested.

It is taken from a press image from the 1982 Commonwealth Games demonstrations, which makes the point that at the time Queensland was the last state to have an ‘Aboriginal Act’ making street marches illegal for people wearing the Aboriginal flag.

Also picking up on the use of the Aboriginal flag is a suite of works by the late Laurie Nilsen (who passed March 2020 when preparing for this exhibition). Titled, Dollar Dilemma (2020), these works were made in response to the recent copyright debate over the Aboriginal flag, which arose when Harold Thomas (the flag’s creator) granted exclusive copyright in 2018 to the non-Indigenous company WAM Clothing. It has since issued cease and desist warning to Indigenous businesses using it.

The ownership of images and the messages they stand for are tackled in a different way by Megan Cope, whose sculptural work Bated Breath (2021), comprises 1,300 shiny ceramic fish spiralling down towards their reflection in a mirrored target – a kind of mass mob commenting on social media and its penchant for racist rhetoric, bullying and inciting violence.

The target is a popular emblem used by the collective, played out in provocative narratives by Cope, Tony Albert and Jen Herd in the exhibition.

Cope has further created the work Dead Wood (2021) – an idiom that refers to things that are no longer useful – as a metaphor for her triptych of barks that hover in a darkened gallery space. They carry a conservator’s inventory or check list (aka a condition report) of the environment since colonial occupation.

It is a really interesting play on systems of classification, and the authority that comes with classification, from bark (aka the bark painting vernacular), through to land ownership, and identity in a museological sense.

Also worth mentioning are a pair of Tony Albert’s works from 2009, which bookend the exhibition. The works titled Butterscotch tribesman and Corroboree explore racist stereotypes through the vernacular of ‘paint by numbers’ – through to a new work, Terra Nullius (with Scrooge) (2021), painted during a residency at UQ for the exhibition.

It overlays the map of Indigenous Australian languages with the Disney character Scrooge McDuck, an oil and mining tycoon, and sits opposite Cope’s Dead Wood installation rounding out that conversation.

Simply, there is too much in this exhibition to mine through in just a few hundred words. This exhibition was two years in the making, and it shows.

It is an important document that is witness to a growing vernacular of contemporary Aboriginal art, but moreso, it is witness to shifting mores and tensions in First Nations conversations, many of which remain to this day.

It reiterates the power of art to broach and bridge positions, for audiences to listen and learn, and for our institutions to give space and time for new thinking.

One would hope that there is the capacity for it to travel – it should do so widely – but if not, it is a mandatory stop when in Brisbane.