This exhibition reinstates jewellery as a living artform, riding out a dance between the hand-made and the machine-made.
Gina Fairley 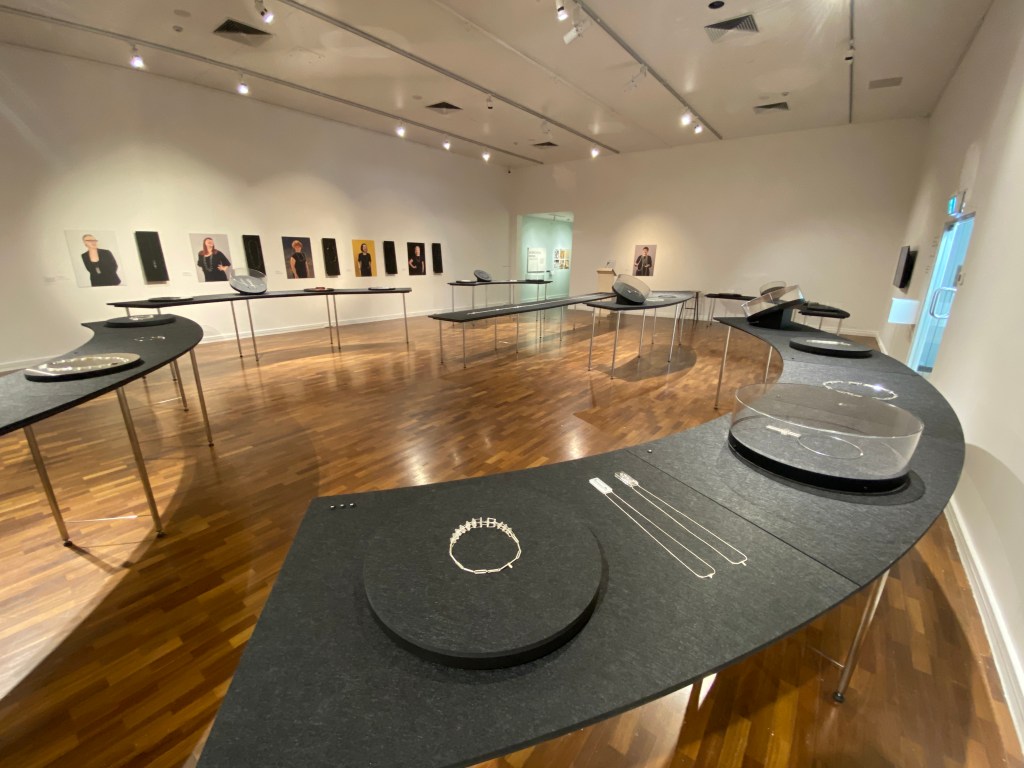 Few would argue that jewellery is perhaps one of the most difficult mediums to display, let alone tour.

But that is the challenge, Curator/Director of Geelong Gallery, Jason Smith took on to share the 25-year journey of acclaimed glass artist, designer and jeweller, Blanche Tilden with her exhibition Ripple Effect.

Despite COVID throwing a few curve balls at the tour schedule, the exhibition made it to the JamFactory in Adelaide in time for the festival, and ahead of being presented in Toowoomba and Canberra.

For many, Tilden is a discovery, despite being one of the few Australian artists to have their work collected by the Musee des Arts Decoratifs, part of Paris’ Louvre. She is also in the collection of perhaps the most esteemed glass museums in the world, New York’s Corning Museum of Glass.

The tour is a no brainer then, an effort to bring her name to the consciousness of greater Australian audiences.

In her work, Tilden fuses the medium of glass with materials usually associated with industrial design – borosilicate glass, titanium, and repurposed objects such as glass camera lens components, computer parts and bicycle chains.

While this is a curious combination in jewellery circles, it was a natural choice for Tilden; her grandfather and father worked at BHP in Port Kembla and she grew up knowing how things are made.

The first thought is the result would be clunky. Quite the contrary. These objects embrace a lightness. They are presented across a flotilla of display cases and stands, where the individual objects seemingly hover at the perfect viewing height.

My only criticism is that colour is kept to a minimum (which may have helped the objects pop a bit more in the space given their predominance of clear glass), but that is totally in sync with Tilden’s aesthetic.

The effect is neutral in the space, with the only flourish, being the arcs and curves in the display furniture, echoing Tilden’s jewellery.

Central to the gallery is a recreated work, Long Conveyor, which sits like a spine through her practice. Included in her first solo exhibition in 1997, this new version is 5-metres long and was commissioned by Geelong Gallery.

Smith said the piece not only speaks to Geelong as major industrial manufacturing centre (many factories are now closed), and a design city, but also references the role manufacturing has played in the pandemic.

The gallery adds: ‘Made during the COVID lockdown, the hundreds of small glass* cylinders in this work optimistically echo the millions of glass vials that are currently being shipped around the world, containing doses of the COVID- 19 vaccine…’

That skeletal/vertebrae quality threads across many of Tilden’s works – both in form and also symbolically as memory. The survey maps out Tilden’s making from 1995 and 2020, across several bodies of work.

Starting with student works, Universal (1991) made from flame-worked borosilicate, Triangle Black and Blue (1991) and One Gold Link (1995), visitors are witness to an already sophisticated individual language, and an incredible technical prowess.

What Tilden struggled with then – and a problem most jewellers face – is how to join the individual elements. It is a resolve that takes many forms across this exhibition.

Signature to Tilden’s work, are pieces that riff off the ubiquitous bicycle chain – inspiration coming from Tilden’s studio located behind a bike repair shop. Here we are seduced by Tilden’s love for mechanical repetition – again one she has refined over the years with the use of equipment for the hand-made to mimic to perfection the machine-made.

Part of the exhibition is a great video that takes viewers into Tilden’s studio to ‘reveal’ the process.

Other series to mention are her Fe et Verre and Wearable Cities works (2010-2015), which take that industrial foundation and takes it to a celebration of modernist architecture. Understandably these pieces stack graduating tiles of glass in a kind of scaffold form, created using waterjet and coldworking techniques and sterling silver –that metal + glass combo that has defined skylines globally.

It is also the moment that Tilden’s interest in circular discs emerges – and leads to her next significant body of work with the Mary Featherston Archive and the National Gallery of Australia (NGV).

In 2015 Tilden was invited to work with a collection of glass jewellery parts made by Featherston’s husband Grant in the 1940s, which led to a new series. It was followed by A Lens on Time (2018), a necklace compiled of spectacle lens collected Featherston’s mother Peg Currey.

It also led to other works made from salvaged glass lens and analogue SLR cameras – the Ripple Effect (2019-2021) – from which the exhibition takes its name. These are displayed in a sweep of concentric circles that cohesively display the necklaces.

Overall – from those student works to these most recent pieces – there is a consistency across Tilden’s oeuvre that is distil from its simplest elegance and conceptual potency. She constantly examines the role of function and value in design.

While today we place so much on the buzz of sustainability, Tilden has been a trailblazer here, picking up on that idea that recycling doesn’t need to mean grungy aesthetics, but rather is an inspirational design resource to extend conversation.

Another interesting aspect of this exhibition is the way it plays out the role of the collectors – both with portraits and their comments as part of the exhibition’s narrative – and also in the accompanying catalogue.

It reinstates jewellery as a living artform. ‘It is the response of the wearer that makes my jewellery succeed for me. The connection that can develop once the necklace becomes precious to someone else, once it becomes part of their persona, their life, their experience, is the aspect of my practise that I value the most,’ Tilden says.

Blanche Tilden is based in Melbourne.