A celebratory survey of the artist's life work.
Julia Faragher 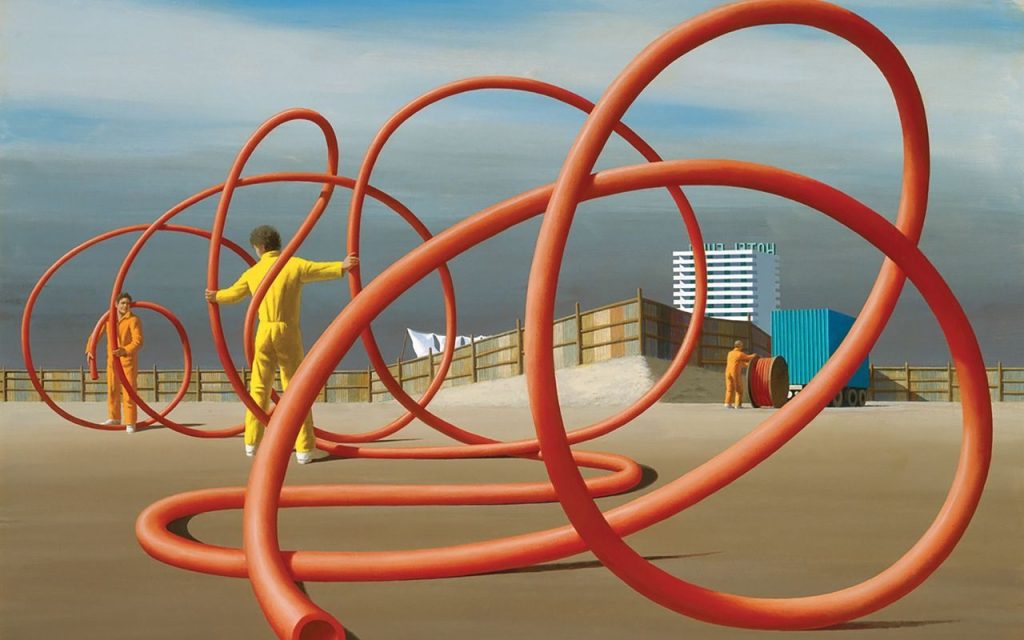 The National Gallery of Australia has gathered over 100 paintings by Australian artist Jeffrey Smart to form a remarkable exhibition commemorating the 100th anniversary of his birth. Best known for his colourful geometric paintings of modern urban scenes, Smart’s paintings shine in this focused stand-alone exhibition that celebrates his life’s work.

The exhibition contains so many hero images that it is difficult to choose a favourite, with offerings that include Cahill Expressway (1962), The plastic tube (1980) and Portrait of David Malouf (1980). These works all feature small, almost insignificant figures who are dwarfed by the urban landscapes they inhabit. They demonstrate how Smart’s paintings do not give loud answers, but instead ask quiet questions. Who is the man standing on the Cahill Expressway? Why are we so compelled to know who he is? Is it because he stares at us? Some artists have chosen to continue the conversation and explored these questions further, such as in the 1989 collection of 29 Australian short stories each inspired by Cahill Expressway. This reveals that the true legacy of Smart’s work is the way his images haunt us long after we have looked at them.

There is a surrealist edge to the realism present in Smart’s work. While his paintings depict everyday, urban scenes, there is often a sense of unease and uncertainty in them that begs attention. One such example is Jacob descending (1979) which shows a man walking on a red staircase against a cloudy blue sky. This is a supposedly normal scene, yet the staircase leads to nowhere and therefore the man is returning from nowhere. So where has he been? It is a small change from the normal in an otherwise ordinary work, a tinge of surrealism in a realist painting. Instead of painting from dreams, Smart sought to find the surreal in real life.

One of the most distinctive things about Smart’s work is his use of colour. He paints in vivid and rich hues that give his work a certain power and allure. There is something intoxicating about his use of mustard yellows, brick reds and impossible blues. These colours are perhaps uninteresting and normal when used separately but yet together are striking and appealing. Smart also uses them to highlight his settings: while Smart’s figures are grey and white, he saves his technicolour for their surroundings such as the vivid blue pool in Luxury cruise (1972-73) and the yellow corrugated wall that dominates the frame in Portrait of Clive James (1991-92).

The exhibition does a wonderful job of highlighting Smart’s influences and journey as an artist, particularly through the inclusion of works from all the major points in his life. The feature of House-roofs and flowers (1935) by his teacher and fellow South Australian artist Dorrit Black reveals the Cubist influence on Smart that may have contributed to his particular attention to shape and form. The wasteland II (1945) illuminates the importance of atmosphere in his work and an early commitment to finding unease in everyday settings as well as his love of dramatic tension.

An exhibition that brilliantly showcases Jeffrey Smart’s best works from across his life, this survey is certain to delight its audiences.