Two news exhibitions at Canberra Glassworks speak of everyday objects and detritus, but they couldn’t be more different.
Gina Fairley 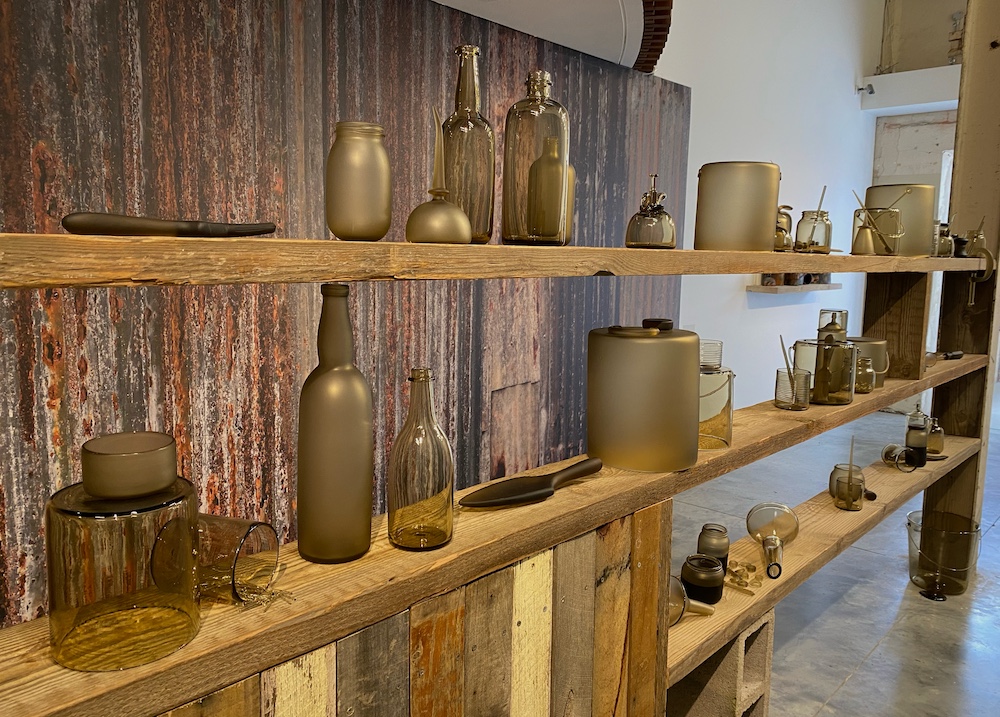 The curatorial thread is clear across these two news exhibitions at Canberra Glassworks, which speak of everyday objects and detritus, but they couldn’t be more different.

Kate Nixon, in her installation On Reflection, usurps the utilitarian function of Sulo wheely bins with disco aesthetics – covering these banal curbside objects with mirrored mosaics – while in the main gallery, Annette Blair’s collection of blown glass household objects in Quietly Spoken, is the antithesis of Nixon’s bling, as its title suggests.

Blair has delivered a stellar exhibition; it is testament to the difference between making work for a show and hanging it in a space, and truly considering the development of a body of work for a space. It is surprising how few artists do the latter.

Walking into the gallery, Blair has made use of the architecture, which divides an already tight room, to create a kind of open Wunderkammer. Upon shelves, one encounters everything from the back tool shed, all made in monochrome tones in glass – paint brushes, buckets, G-clamps, jars and funnels. Some of the jars are even filled with glass nails and screws.

It is an absolute masterwork, and demonstrates Blair’s skill level, but also deep considerations on every level.

Read: So you want my arts job: Glass Artist

Surrounding it are little ‘still lifes’ of collected objects – a milk bottle and lemons, a vase of poppies with several fallen petals (which has a wry reference to Venetian glass aesthetics), and a tin drum of branches and scattered autumn leaves. Everything is familiar – making it easy viewing – but at the same time elevates the ordinary to a place of awe and wonder.

The only comment would be that less is better when considering these works – testament by the main installation, Vestige #11 (a study of domestic relics). The work On any given day, displayed on a shelf off to a side, repeats some of these objects, but the glass surface in contrast, has been treated with a heavy decorative patterning, hand painted onto the blown surface.

While it demonstrates another incredibly mastered technique, it does not add anything to the object or artwork; its overly painterly ‘patina’ complicating the objects unnecessarily, neither reflecting a realistic patina of age, nor any rational connection other than that of ‘decoration’.

That aside, this exhibition is an absolute win with audiences.

Also a ‘pleaser’ but in a different way, Nixon’s installation sits spotlight within the dim brick, heritage Smokestack of the Glassworks. The setting adds to the drama, and the narrative. It is the first time Nixon has shown for a while (like many artists moving across to curating and arts administration). The installation takes its cue from where she left off – her For Collection series (c. 2018) – however it doesn’t push it enormously, except in scale.

Nixon is interested in ruffling the history of traditional mosaics, which dates back to early civilisations and rely on pattern and colour. Stripping the genre of those things, she is more interested in the play of light her mosaics deliver – aka disco ball shimmer. The exhibition text states the disco ball dates back to 1897, and was widely used in the 1920s and then mass produced from the 70s.

The text continues: ‘Disco exemplifies a time for women’s liberation, Black rights and sexual freedom’, implying that Nixon’s work is about reinserting those histories into the mosaic history. While the installation has a fun anti-establishment / anti-categorisation feel, it falls short of fusing those histories.

Ever since Andy Warhol elevated the Brillo box and Campbell soup can, artists globally have sought to subvert the everyday for their own conceptual framing. So as viewers, we are pretty well attuned these day to reading – and expecting – that conceptual delivery and rigor if that is the path we are directed down. I wanted this piece to push me more.

That said, Nixon does play nicely with our expectations. She gets the scale right in the space, and still leaves plenty of room for her to develop this work further.

This conceptual framing is the glue that connects these two exhibitions with such ease. Most literally, it is played out in a collaborative work, The Passing of Autumn, which the viewer passes moving from one gallery to the next – a mosaic dustpan brushing up glass leaves. It raises a smile.

In it, we are reminded of the ritual that objects play in our everyday lives. Is it nostalgia? Is it subtle humour, or perhaps it is just simple joy. It is this sensory experience extended to the viewer that is its greatest gift of these two shows.

Quietly Spoken, by Annette Blair, and On Reflection, by Kate Nixon.
Canberra Glassworks on view until August 14.